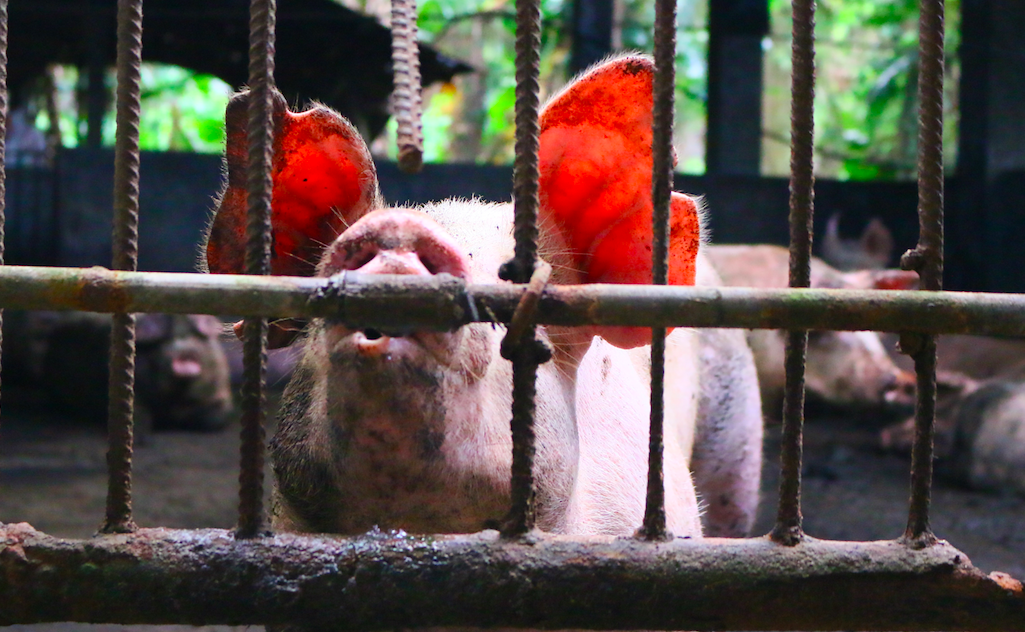 If you’re a Filipino, chances are you often have a hard time choosing among the three.  Indeed, in the last several decades, Filipinos have become more and more carnivorous. Government data show that in 2016, per capita consumption of meat and eggs in this country was already at 38.49 kilos per year – or slightly more than three kilos a month – which was nearly double the comparative figure (21.17 kilos) in 1990. The compound growth rate of beef, pork, and chicken has also been projected to rise by 30 percent from 2011 to 2021. No wonder then that the Philippine Institute for Development Studies (PIDS) says that Philippines is now among the 10 countries in the world with the fastest growing community of meat consumers.

That may not be good news for our health – or for the environment. Earlier this month, the Intergovernmental Panel on Climate Change (IPCC) released a report that essentially called for less meat consumption to help mitigate climate change. Locally, green activists have been pointing out for years that the livestock and poultry industries have been getting away with wreaking havoc on waterways in particular.

Environmental advocates, however, are most concerned with the swine industry, the banner unit of the livestock sector that the government estimates to be a PhP191-billion industry, as of 2016.  They say that as it continues to grow, so do the health, sanitation, and pollution problems that it spawns.

The Philippine Statistics Authority (PSA) says that as of January 1, 2019, the country has a total swine population of 12.7 million at backyard and commercial farms in the country. That comes up to a hog for every 10 Filipinos.  It says that Central Luzon has the highest number of hogs, in terms of inventory, followed by CALABARZON, and then Western Visayas. These regions contribute 38.35 percent to the country’s total swine inventory.

Backyard farms, though, host over 68 percent or 8.7 million heads of the country’s total swine population. The commercial farms have much less at 4.54 million or 32 percent of the total.

But in the past few decades, backyard farms tending at least one to less than 20 heads of hogs have mushroomed across the regions. These farms have been partly blamed for the decay and death of nearby rivers. Although registered with and regulated by local government units, a great number of the backyard farms lack proper septage and waste-treatment facilities, instead ejecting pig manure and carcass straight off to water systems.

Most hog farms “preferred direct dumping of waste into accessible bodies of water such as creeks, rivers, and canals,” a  2016 joint study conducted by the Development Academy of the Philippines (DAP) and the Department of Agriculture-Bureau of Animal Industry (BAI) said. “The respondents believe that the wastes from livestock farms, when dumped into a body of water, will serve as food for fishes. According to them, a remarkable growth in the number of fish has been observed when they started dumping manure and liquid wastes into the water.”

But the report, called “Estimation of Pollution Loading from Livestock and Poultry,” did not let commercial farms — which purportedly could afford better and cleaner waste disposal options  — off the hook.  The study said that even commercial farms threw hog feces into nearby rivers.

“Although most of the commercial farms have septic tanks, a number of them still discharged solid and liquid waste into bodies of water,” said the report, which surveyed 171 hog farms in eight provinces whose waterways were linked to Manila Bay.

PSA says that for backyard farms, Western Visayas, Central Visayas, and Bicol Region are the top three regions in terms of inventory. These regions account for 33.58 percent of the country’s stocks in backyard farms.

For commercial farms, PSA says that Central Luzon, CALABARZON, and Northern Mindanao have the highest swine inventories. The combined stocks from these regions account for 68.77 percent of the total inventory in commercial farms.

Here is where the hogs are (backyard and commercial farms), by regions of the country, as of January 2019, according to PSA:

A hybrid system has emerged in some areas, however. This is the ‘paiwi’or ‘pa-alaga’ system, which involves a financier striking deals with chains of backyard swine-raisers to grow hogs up to their prime weight of 90 or 100 kilos that the financier later buys these later for his or her commercial farm. Many financiers are also owners of feed mills, and they supply backyard hog-raisers with feeds for the pigs.

The situation has apparently become unwieldy for regulators, who already seem to be lax when it comes to implementing rules. As of December 2017, the Bureau of Animal Industry (BAI) reported that a total of only 430 hog farms had registered with the government, including 264 newly registered and 166 that had renewed their registration.

This is a smaller number than the 511 establishments engaged in hog farming, according to the 2016 Annual Survey of Philippine Business and Industry (ASPBI).

The ASPBI survey had counted a grand total of 2,835 establishments in agriculture, forestry, and fishing in the formal sector of the economy.

PIDS, for its part, says in a 2017 study that the value of production of most other agriculture products has marked a “slowly decreasing trend,” amid sliding government support for the sector. But it notes that the livestock (swine, carabao, cattle, goat) and poultry (chicken, ducks) industries have bucked the decline and continue to flourish. According to the PIDS study, it is growth driven largely by a briskly growing population and slightly rising family incomes.

Demand for pork has in fact been greater than what local supply can meet. As a result, the Philippines has started to procure more and more imported pork. This in turn has triggered ill effects on the local industry; the steadily rising volume of pork imports has been blamed in part for the onset of imported swine diseases, and for constricting the market and lowering farmgate and retail prices for local pork.

Altogether, the local industry produces 1.2 million tons of pork every year, PIDS says. A ton is equivalent to 907.185 kilos, or about a thousand kilos. Local pork production thus comes up to about 1.2 billion kilos, or only 11.42 kilos of pork for every Filipino per year.

Last year,  the BAI reportedly crafted “A Road Map for the Swine Industry,” but the document has not been fully published. A report that ran on the pigprogress.net website, however, said that the 26-page “action plan” was supposedly informed by “consultations with commercial businesses (that) signal significant changes for local producers, their supply chain, and the value chain for pig meat in the Philippines.”

“This plan envisages a growth of per capita consumption of pork in the Philippines from 14.9 kg/capita in 2015 to 16.4 kg/capita in 2017,” the report said. “This is relatively modest but still implies a growth of +30% in the domestic herd. The technical KPIs (key performance indicators) for production are also targets for improvement in the roadmap.”

While the BAI focuses largely on shoring up the competitiveness of the hog industry, seemingly impervious to its negative impact on the environment, the regulation of backyard hog-raisers by local government units varies from loose to just slightly strict.

This is even though the industry’s ill effects on the environment are hardly new or previously unheard of.

Nearly two decades ago, for instance,  Ma. Angeles O. Catelo, Moises A. Dorado, and Elpidio Agbisit Jr. of the University of the Philippines in Los Banos, Laguna had raised alarm bells in a study titled “Backyard and Commercial Piggeries in the Philippines: Environmental Consequences and Pollution Control Options.”

By 1999, the scholars noted, the government had already estimated that Laguna had about 220,000 heads of pigs. The scholars said that “assuming all wastewater from pig pens in Laguna discharge eventually into Laguna de Bay, and with an average of 1.65 kg manure per head (sow) per day, there is an estimated pollution loading into the Laguna Lake of 363 tons of manure per day or 132,500 tons of manure per year from hog farms alone.”

“Laguna de Bay, insofar as it is being considered a potential source of drinking water in the future, notwithstanding the current economic benefits derived from it, will certainly improve its ambient quality if pollution load from hog farms that discharge their waste indiscriminately into the bay's tributaries is greatly reduced,” they wrote in the 2001 study.

In a subsequent study, Catelo, an environmental economist, argued that hog-raisers must be compelled to do more to protect the environment.  She wrote: “Pig producers are said to benefit from negative externalities when they do not bear the full social costs of their business enterprise. Non-internalization of such externalities occurs when pig producers receive payment for their output while not investing in pollution abatement or not making compensatory payments to surrounding communities affected by their production processes.”

She pointed out that while “in some cases, producers are able to recycle all nutrients from swine production on-farm through various cropping mechanisms...in other cases, pig production is so large that there is no land to properly dispose of such by-products without some environmental mitigation effort.”

Whether backyard or commercial in scope, all hog-raisers should respond positively and take action, on environmental issues triggered by their enterprises, Catelo said. To avoid “environmental capture” or irreversible environmental costs, she proposed certain policy options, including “zoning, mandatory nutrient management plans, licensing or limiting the number of animals raised per production unit, and contractual agreements between livestock producers and crop farmers.”

To be sure, though, the best rules bend under neglect and non-implementation.  Observed Catelo: “The effectiveness of such regulations will depend largely on the degree to which they are enforced and whether they are accompanied by a well-developed system of education and extension with focus on proper manure management systems and dead animal disposal.”

Virginia Benosa-Llorin, campaigner for Greenpeace Southeast Asia-Philippines, says various stakeholders might do well to take a few key, urgent steps to address the lingering issues in the local meat industry.

For one, beyond setting policies, national government agencies and local government units need to implement these and “look deeper into the operations of industrial poultry and piggeries” in light to global and local reports that the industry has become “a significant contributor to environmental degradation and a main driver of climate change.”

“We are conditioned to eat meat but this preference leads to the destruction of our forests, land and water resources. It will not sustain the needs of the current and future generations,” Greenpeace said. “Filipinos must be provided with access to safe, sustainable and nutritious food.”

Greenpeace urged the government to “increase support for smallholding farmers, especially those practicing ecological agriculture methods,” and “adopt policies and programs to drive change in dietary habits and consumption patterns.” Food councils, it proposed, may be established to develop “food policies, plans, and programs.”

Cutting down on industrial meat consumption and switching to ecologically produced plant-based food will make people and the planet healthy, it said.