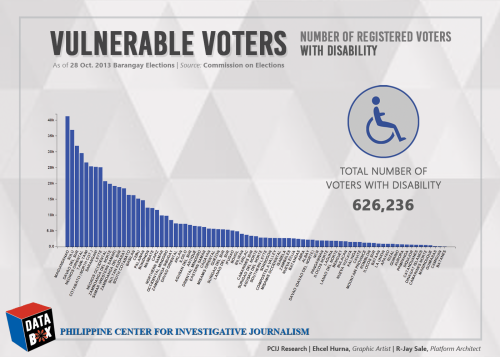 The ‘vulnerable’ amongst us

THEY MAY be fewer and weaker but their right to vote is just as important as that all voters share.

Their sorry situation is a context for the May 2016 elections. In large measure, their being “vulnerable voters” derives from the internal conflict and the poverty that afflict us all in the nation.

As of the last elections in October 2013 we voted our barangay officials, records from the Commission on Elections (Comelec) showed a total of 626,236 registered voters with disability, and another 339,144 who are illiterate or with had little or no formal schooling and could not read or write.

And they come from areas that are also the most vulnerable if not to cheating and fraud, then to other irregularities that may visit the balloting this year.

The big numbers of persons with disability (PWDs) among registered voters are from the conflict-affected regions of Mindanao.

Interestingly, these provinces are also considered by then authorities as election watch-list areas (EWAs) in the May 2016 elections. They include the province of Maguindanao that has witnessed politically motivated incidents and threats from armed groups in recent elections.

Meanwhile, Comelec data also revealed that big numbers of illiterate registered voters, as of the October 2013 elections, are from provinces with the highest poverty incidence among families from 2006 to 2012. 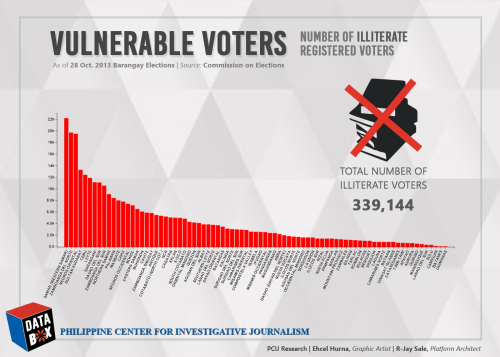 These provinces, according to the National Anti-Poverty Commission (NAPC), include Samar, Zamboanga del Norte, Negros Oriental, Sultan Kudarat, and Saranggani.

Republic Act No. 10366 “An Act Authorizing the Commission on Elections to Establish Precincts Assigned to Accessible Polling Places Exclusively for Persons with Disabilities and Senior Citizens” was enacted on August 30,2013.

Section 2 of the law says that PWDs refer to “qualified voters who have long-term physical, mental, intellectual or sensory impairments which, in interaction with various barriers, may hinder their full and effective participation in the electoral processes on an equal basis with others.”

“It may likewise refer to qualified voters whose physical inability to accomplish the ballot, on Election Day, is manifest, obvious, or visible,” it adds.

As of February 2011, the National Household Targeting System For Poverty Reduction of the Department of Social Welfare and Development said there were 4,466,649 households in the country with PWDs.

This number excludes as yet those form the Set 1 areas of the government’s Pantawid Pamilyang Pilipino Program (4Ps or Conditional Cash Transfer Program), or 333,281 households from the same poorest provinces of the country who had been served from March to December 2008.

For its part, the National Statistics Office (NSO) said that as of 2010 Census of Population and Housing, of 71.5 million Filipinos aged 10 years old and above, 97.5 percent or 69.8 million were literate or could read and write. This was better than the literacy rate of 92.3 percent recorded in the 2000 census.

The flip-side though is that this number also means that across the nation.1.7 million or 2.5 percent of all Filipinos 10 years or older are unlettered or could not read or write.

The National Capital Region or Metro Manila leads with a 99.7 percent literacy rate.

Among the regions, ARMM, too, had the lowest school attendance at 59.3 percent, and among the provinces, Basilan, at 52.8 percent, as of the 2010 census.