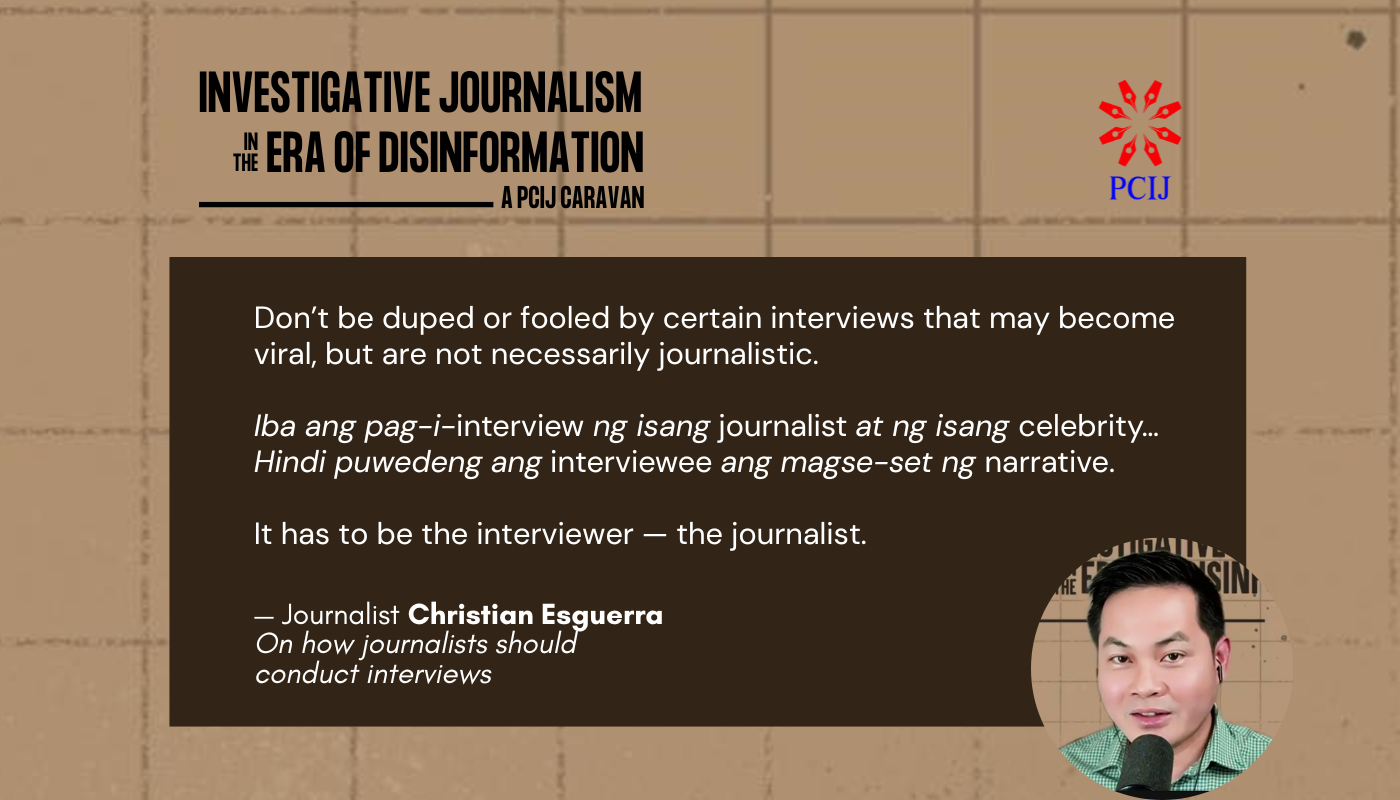 Esguerra, anchor of Facts First on Youtube, said journalists regularly deal with sources who may “set their own narratives” during interviews.

“The interviewer [the journalist] should set the narrative, he said. “Iba po kasi ang pag-i-interview ng isang journalist, at isang celebrity… We [as journalists] conduct the interviews to get more information [for our stories]. The interview is just part in the process of gathering information.”

He advised student journalists to prepare before interviewing sources no matter how knowledgeable they think they may be of the topic to be discussed. “Nothing beats preparation… You cannot do an interview just trying to fish out certain information, as we are the conduit to the public at large,” he said.

On Thursday, the caravan featured PCIJ Fellow Karlston Lapniten’s investigative report on proposed hydropower plants that threaten the indigenous community in Kabugao, Apayao. His report detailed irregularities in the consent process surrounding the Pan Pacific Renewable Power Philippines Corp.’s project, and the alleged collusion among authorities and proponents that led to the improper release of the permits for the establishment of facilities.

Lapniten was red-tagged online while he was investigating the project, but he said he was not discouraged. “You need to do in-depth reporting… so you can dispel the information they are peddling on social media,” he told student journalists.

Students from the Cordillera region, many of them from the Saint Louis University and the University of the Philippines-Baguio joined the online event.

“In a sea of propaganda and disinformation, it is important to go back to the role of journalists; to the watchdog role of the media… The situation may seem discouraging, but this is when we should better understand our audiences – their nuances and their characteristics,” Ilagan said.

In her presentation, Ilagan detailed the various methods the disinformation industry has peddled lies — from animated videos on Facebook to the rise of micro-influencers who disinform with their content. These disinformation networks are “demonizing" the traditional media, she said, to corrode the audience’s trust in journalists.

“The key role of investigative journalism is being an ‘independent monitor of power’... and that is one way we can rebuild trust with our audience,” Ilagan added. END