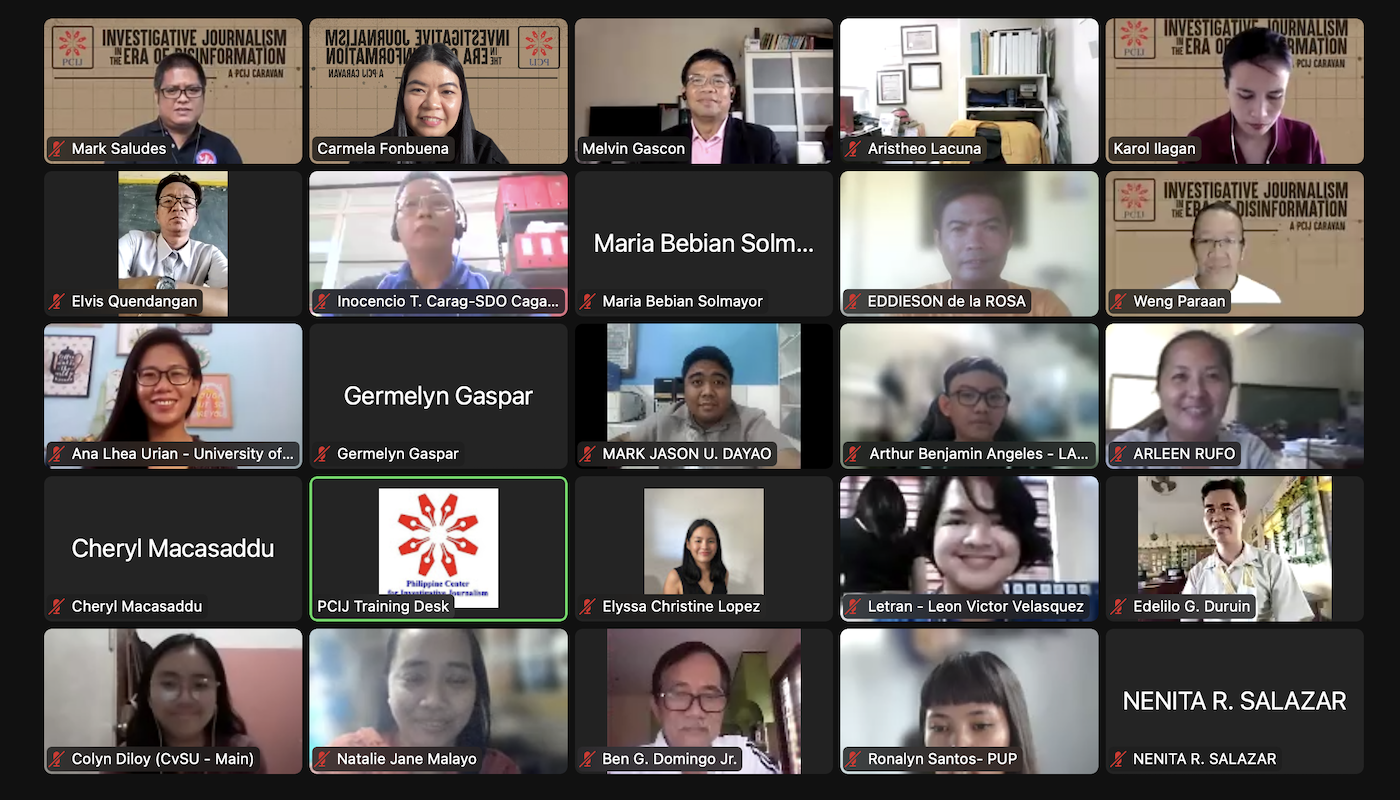 “The media is not perfect, and we know we need to do better to regain the trust we lost as a result of the aggressive campaign against our credibility…  We believe investigative journalism is the best antidote to disinformation,” PCIJ Executive Director Carmela Fonbuena said in her welcome remarks.

PCIJ editors and writing fellows shared their experiences producing investigative reports in the online event that brought together over 200 students, professors, teachers, and journalists — mostly from the Cagayan Valley region.

The school papers have an important role to play, said Fonbuena. “We are doing these caravans because we are looking for allies who will defend and assert press freedom, freedom of information, and freedom of expression,” she said.

“If politicians are committing wrongdoings, we will not read these in their Facebook pages or from the Facebook pages of their supporters. It’s the investigative journalists who will expose them. It’s the investigative journalists who will take the time to pore into documents and interview people to get all sides to the story,” she said.

In her lecture, Ilagan showed the rise of disinformation in the Philippines and enumerated ways to combat it. She said news consumers need to understand how they come to trust a source of information and distrust others. She also highlighted the responsibility of technology platforms to regulate disinformation.

The online caravan series aims to highlight investigative reports produced by PCIJ fellows who participated in the 2021 Second National Conference on Investigative Journalism. PCIJ chose four fellows out of 80 conference participants who proposed to write about environmental concerns, human rights issues, the COVID-19 pandemic, and the 2022 national elections.

The caravan on Wednesday featured Mark Saludes’ investigative report on how a dredging project meant to restore a major river in Appari town in Cagayan has wreaked havoc on the livelihood of local fisherfolk. His research showed a decline in the harvest of aramang following the launch of the dredging project in 2021.

Despite repeated denials from provincial government officials, the local stakeholders continued to accuse the contractors of mining black sand.

Ilagan, who mentored Saludes, said it was obvious that proper community consultations were not conducted before the project was launched. The municipal government didn't have a copy of the project agreement until it was provided by PCIJ.

It’s the second time for Saludes, reporter for the Catholic news site LiCAS.news, to become a PCIJ Fellow. He participated in last year’s Capturing Human Rights fellowship program, where he documented the red-tagging of the religious sector in the Philippines.

Saludes shared how he got wind of the alleged mining activity in the small town, and the long process it took for him to verify the claims of the residents.

PCIJ partnered with various schools and universities for the online caravan series. On Wednesday, PCIJ was joined by students and faculty members in the Cagayan Valley region, in partnership with the Cagayan School Paper Advisers Association.

The second leg of the online caravan will feature the report of PCIJ Fellow Karlston Lapniten. He showed how Pan Pacific Renewable Power Philippines Corp. intends to build two large hydropower plants which threaten to submerge communities in Kabugao, Apayao. Communities also reported irregularities in the consent process and collusion among authorities and proponents, which allegedly led to the improper release of the permits for the two mega-dams. END