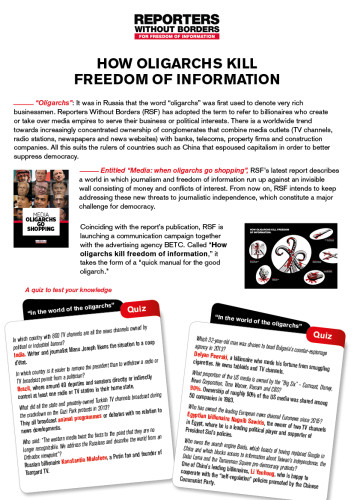 “IT IS a worldwide trend. From Turkey and Russia to China and India, new media empires are emerging, usually with governmental blessing. Their owners comply with capitalist laws of supply and demand and the need for technological development. But, at the same time, they take strict control of news coverage or replace journalistic content with entertainment.”

In its latest report, “When Oligarchs Go Shopping,” Reporters Without Borders (Reporters Sans Frontieres) looks at this curious, dangerous phenomenon. Excerpts from the report follow:

IMAGINE a world in which the mass media were the exclusive property of a handful of people, all business tycoons. Many people think that world has already arrived. Businessmen of every kind have been seized by the disturbing desire to buy up large numbers of major newspapers, TV channels and radio stations around the globe. No country, no continent – neither India, China, the United States nor Europe – seems to escape the appetite of these new oligarchs for media acquisitions.

Their latest feats include Jack Ma’s purchase of the South China Morning Post, one of the last champions of the free press in Hong Kong, a newspaper that did not hesitate to criticize the government in Beijing. Ma is the owner of the Chinese e-commerce giant Alibaba.

Where will these new media owners stop? Their ambition often matches their financial resources, which are limitless. In a recent book, Indian historian Nalin Mehta said his country, “the world’s biggest democracy,” has around 800 TV channels but all those that provide news coverage are owned by shadowy billionaires – including real estate barons, politicians and captains of industry – and that some of these channels are used to blackmail, promote personal interests and even launder money. “There is a coup underway in India,” writer and journalist Manu Joseph says. “Some people who are inconvenienced by democracy have taken over nearly all the country’s television news channels.”

Some of these billionaire businessmen boast of being able to make and unmake governments. Others enter into alliances with governments, offering them mass media support in return for economic favours. In all cases, their financial power combined with their control of media flagships gives them almost limitless influence, one far removed from the journalistic principles that their employees sometimes try to defend.

The victims of such unholy alliances include Turkey’s leading media, which are subjected to censorship that is much more insidious and sophisticated than the government’s usual repressive methods, censorship in which the oligarchs are accomplices.

“While the world is focused on the issue of jailed journalists in Turkey — almost all of whom are Kurds — the kiss of death to our profession has been bestowed by owners who consciously destroy editorial independence, fire journalists who voice scepticism and dissent and block investigative reporting3,” Yavuz Baydar wrote in 2013, while ombudsman of the daily Sabah after holding the same position with Milliyet.

Along with dozens of other journalists, he was fired for being too critical of the Erdogan government, which did not need to intervene because the media owners anticipated its wishes.

These new media oligarchs have prospered under Prime Minister and now President Erdogan, who anointed them and to whom they have remained loyal. “The problem is simple: one need only follow the money,” Baydar says. As in so many other countries, the leading media in Turkey have wound up in the pockets of businessmen active in such strategic sectors as telecommunications, banking and public works, a sector described by Baydar as a “fertile ground for carrot-and-stick policies.”

Media owners who support government policy can count on being rewarded with state contracts, licences, advertising and even tax concessions. The critical ones are silenced slowly and quietly. President Erdogan’s current “best friends” include such oligarchs as Ferit F. ?ahenk, the head of the very powerful Dogus Group (which controls NTV), Turgay Ciner, an energy sector billionaire who owns Haberturk TV and the Haberturk newspaper, and Yildirim Demirören, the CEO of an oil, gas, tourism and public works conglomerate who bought the prestigious big-circulation daily Milliyet in 2012.

Other media outlets have been bought up by pro-government oligarchs with disastrous consequences for media freedom. “Editorial content is strictly controlled by media bosses who have other business interests and are submissive to the government,” said Baydar. “With, or more often without, any direct government intervention, they impose self-censorship on a daily basis and silence colleagues who defend basic journalistic ethics.”

Furious with the way Milliyet “grovelled” before the government after it was taken over, the newspaper’s star columnist, Hasan Cemal, stormed out in 2013. The same year, thousands of Turks took to the street in protest against the government’s growing authoritarianism.

Dubbed “Occupy Gezi” after the Istanbul park that became its symbol, the protest movement held the international media spellbound for several weeks until forcibly crushed by the police. While all this was unfolding, Turkey’s leading TV channels contented themselves with broadcasting animal documentaries or debates on completely unrelated subjects. Their owners must have had other things on their minds.