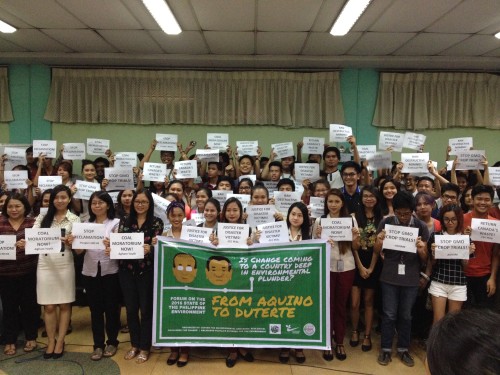 FRANCES Quimpo’s recollection of the country’s worst tragedies under a parade of Philippine presidents past reveals a singular pattern — death, devastation, and a dearth of lessons learned.

More than 200 people died when mounds of garbage at the Payatas dumpsite in Quezon City collapsed. Triggered by a typhoon, the landslide took place six months before Joseph Estrada’s ouster from Malacañang in January 2001.

During Gloria Macapagal-Arroyo’s nine-year presidency, a string of typhoons — Frank, Ondoy, and Pepeng, to name a few — flooded many parts of the country, taking hundreds of lives and damaging billions worth of properties. It was also under Arroyo when the government’s flagship mining project in Rapu-Rapu, Albay spewed out cyanide into the sea, causing massive fish kills.

Quimpo, executive director of the Center for Environmental Concerns-Philippines (CEC), said these disasters should have served Arroyo’s successor, Benigno S. Aquino III, important lessons. The political and economic policies that previous governments had pushed, she said, had put the environment at risk, and aggravated the impact of natural hazards in what was by then the climate-vulnerable state of the Philippines.

But in the next six years as president, Aquino saw the issuance of executive orders, which according to environmental advocates, did little to address the problems they were meant to solve. On top of these new policies are old laws that are either problematic to begin with or not enforced properly. 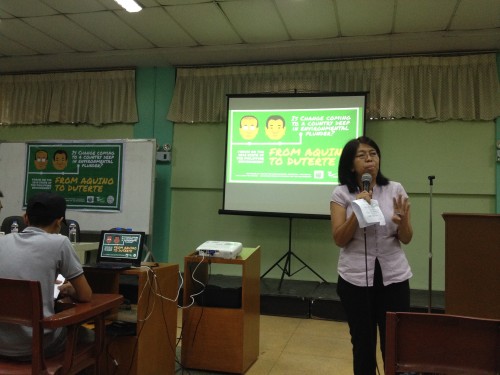 A TRAIL OF DISASTERS. CEC Executive Director Frances Quimpo gives a rundown of calamities that had visited the nation since former President Joseph Estrada’s term.Photo by Karol Ilagan/PCIJ

Gathered at a forum Monday afternoon, environmental groups thus urged President Rodrigo R. Duterte to steer clear of the programs and policies of his predecessors that run counter to the protection of communities and natural resources.

The forum, co-organized by the CEC, Kalikasan People’s Network for the Environment (Kalikasan PNE), and Eco-Challenge for Change coalition, also served as a venue to discuss the environmental challenges that the groups want Duterte to address.

Secretary Gina Lopez of the Department of Environment and Natural Resources (DENR) was invited to speak at the forum but she failed to show up.

Clemente Bautista, Kalikasan PNE’s national coordinator, said that so far, their groups have not seen any actions from Duterte that would run against their environmental agenda; they have not also heard, however, of any pronouncements or seen any significant moves that would signal changes in the Aquino administration’s policies. 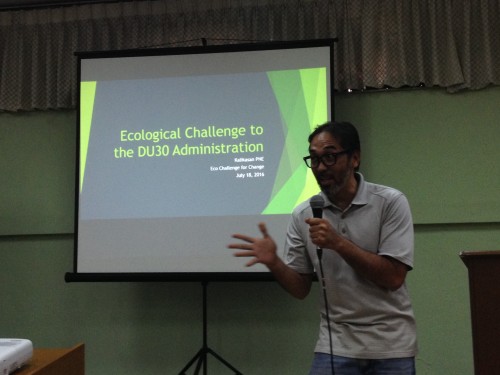 A week before Duterte took his oath of office last June 30, the “Eco-Challenge for Change”, a coalition of environmental groups, including CEC and Kalikasan PNE, presented its 14-point agenda for the president to act on.

Signed by 41 groups, the coalition’s list of demands includes stopping illegal large-scale mining in environmentally critical areas and imposing a moratorium on the new construction and expansion of coal-fired power plants.

Since Lopez assumed leadership of DENR, work in at least four mining operations has been suspended. The department has likewise conducted an audit of mining activities.

Bautista said the coalition should be able to give a more thorough assessment of the Duterte administration after 100 days. “Sa ngayon, binibigyan namin sila ng puwang para patunayan ang kanilang tindig para sa kalikasan,” he said. (For now, we are giving them the chance to prove their stand for the environment)

While Duterte has shown a track record favoring environmental protection, the groups are also well aware of the former mayor’s support for the construction of a coal power plant and the establishment of palm oil plantations in Davao City.

On Monday, Duterte said he would not honor the Paris climate agreement, laying blame on developed countries for their bigger role in climate change. Signed by 178 countries, the historic deal is an effort to keep global warming below 2 degrees Celsius by reducing carbon emissions.

Bautista said Duterte was right to demand greater responsibility from developed countries but that they hope, too, that the president would not support the expansion of coal-fired power plants as this would be counter-productive.

“Our renewable and indigenous energy resources such as hydro, geothermal, solar, and natural gas are more than enough to provide our energy needs now and in the future,” he said in a statement.

This, Borcena said, is another lesson that should be learned from the previous administration. To be fair, she said an environment agenda was included in Aquino’s “A Social Contract with the Filipino People” and later as one chapter in the 2011-2016 Philippine Development Plan. This, she said, was the first time for the country’s development plan to have an entire chapter devoted to environment and natural resources.

Borcena said the execution of these plans did not run well in large measure because DENR did not have a reform team. Former DENR Secretary Ramon Paje and his leadership team, she said, came from the bureaucracy.

Prior to his appointment in 2010, Paje was DENR undersecretary for field operations and executive director of the Minerals Development Council under the Office of the President.

Moreover, Borcena said DENR would benefit from promoting “participatory environmental governance at all levels,” which was absent during Paje’s term. This setup could help ensure a partnership between civil society organizations and DENR.

“It shouldn’t just be token partnership. It should be institutionalized,” she said.

Borcena is a co-convenor of the Citizens’ Environment Network. She was also involved in Aquino’s presidential campaign and later joined the Inter-Agency Technical Working Group that crafted the environment chapter in the Philippine Development Plan.

At the forum’s close, CEC’s Quimpo noted that environmental issues could not be separated from political and economic policies. Efforts such as tree-planting and coastal cleanups should go hand in hand with fixing problems at the policy level, she added.

Quimpo said the president has so far made pro-people policy pronouncements but the challenge is delivering results. “Let us use these to ensure that change will come by pressing the Duterte government to walk the talk.” < strong>– PCIJ, July 2016