THE general manager of SMA Builder, one of the firms awarded with a road project in Marawi, this Monday confirmed to PCIJ that she is related to the Macarambons but clarified that the political family in Lanao del Sur had nothing to do with the contracts that had been awarded to her company. 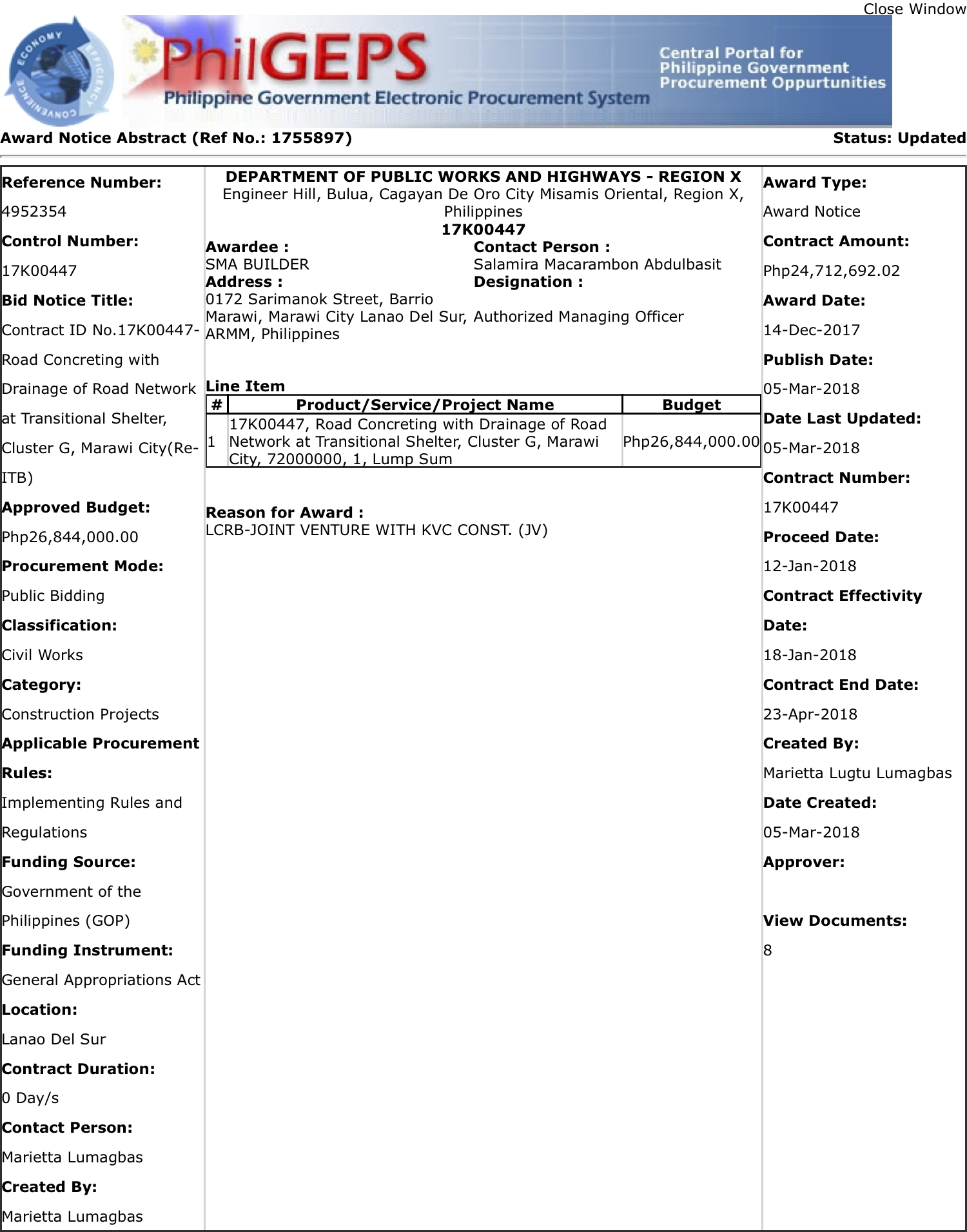 THE general manager of SMA Builder, one of the firms awarded with a road project in Marawi, this Monday confirmed to PCIJ that she is related to the Macarambons but clarified that the political family in Lanao del Sur had nothing to do with the contracts that had been awarded to her company.

In a letter dated May 28, 2018, Salamira Macarambon Abdulbasit wrote that “(a)lthough they are in politics we do not rely on them and added that “(w)e are self-relian(t) in business for work.” Abdulbasit, however, did not specify how she is exactly related to the Macarambons.

Last week, PCIJ reported that contractors linked to political clans have been awarded multi-million-peso contracts to build transitional shelter units and roads for residents of the Islamic City of Marawi and nearby villages of Lanao del Sur. Read PCIJ story: “Firms of clans among winners of Marawi road, housing deals”

SMA Builder, along with its joint venture partner KVC Construction, was awarded a P24.7-million contract for the “Road Concreting with Drainage of Road Network at Transitional Shelter, Cluster G” in Marawi by the Department of Public Works and Highways – Region X.

Another firm that won a Marawi project was Fiat Construction Services which is owned by Farouk M. Macarambon Sr., the father of Rolan Abdul Rashid of “Fiat” and Farouk Jr., currently assemblymen in the first and second districts of Lanao del Sur in the Autonomous Region in Muslim Mindanao Regional Legislative Assembly (ARMM RLA), respectively.

PCIJ, as of press time then, could not determine whether SMA Builder’s listed proprietor, Salamira Macarambon Abdulbasit is related to the political family of Macarambons. PCIJ wrote a letter requesting for comment to Adbulbasit on May 20, 2018.

Abdulbasit further confirmed that SMA Builder engaged in a joint venture with KVC Construction to qualify for the P24.7-million road project, saying “if I cannot join the Bid for the project below 50 million, we are authorized to apply a joint venture for a Special License in Philippine Contractors Accreditation Board (PCAB) office at Manila.”

She said the SMA Builder won the project through a public bidding and not through a negotiated procurement. “(W)e Bid at Department of Public Works and Highways at Region X, Cagayan de Oro & my firm is the lowest bidder for the project,” she said.