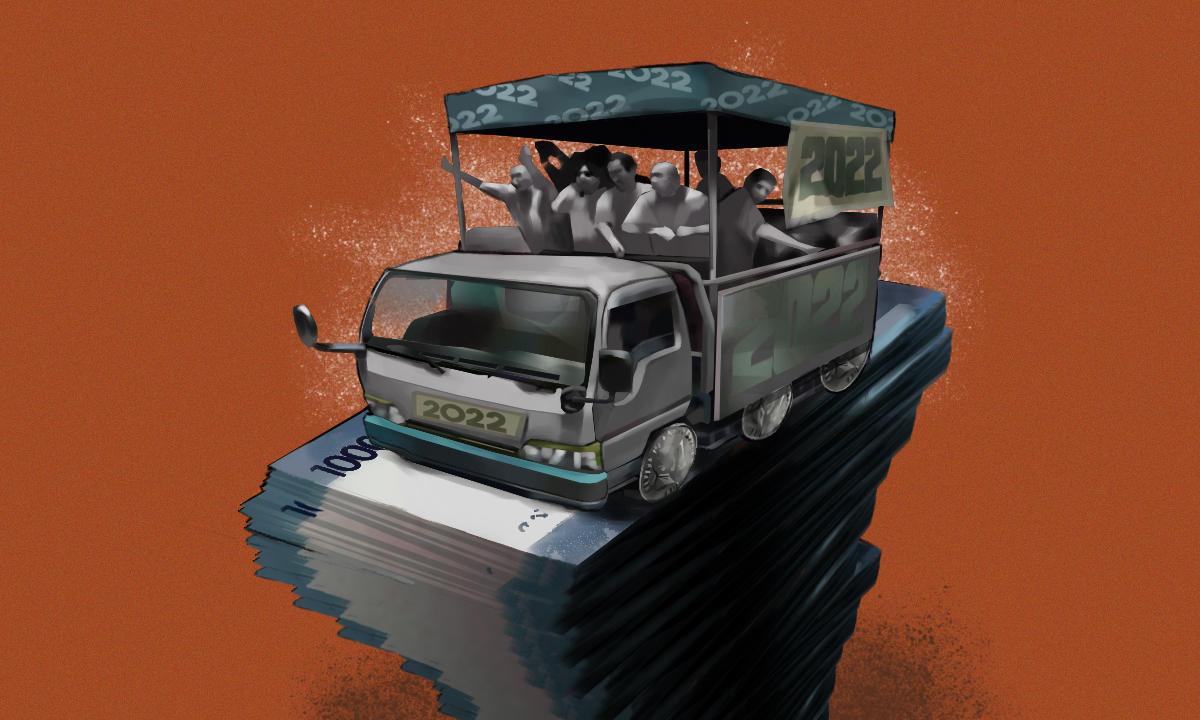 Local races are expensive going by candidates’ spending before the campaign period began on March 25. A number of them would have already overspent if pre-campaign activities were covered by spending limits.

At least two Pangasinan politicians have aired ads worth over P100 million each on mainstream media, based on rate cards, data from Nielsen Ad Intel showed.

The campaign period for local races started on March 25.

Espino and Ventenilla are the biggest ad spenders on mainstream media among local politicians during the reporting period. Both are running under the regional party Abante Pangasinan Ilokano.

Espino hails from a political family. His father, the family patriarch Amado Espino Jr., served as governor and congressman of the province. His political career was marred by controversies involving the jueteng illegal numbers game, the illegal drug trade, land-grabbing, and illegal black sand mining.

His mother Priscilla Espino is seeking to continue her mayoralty in the town of Bugallon, while his brother Jumel Anthony Espino is an incumbent district representative.

Pangasinan has over two million voters. It has the country’s third biggest voting population, next only to Cebu and Cavite provinces.

With a spending limit of P3 per registered voter, Espino and Ventenilla are only allowed to spend about P6 million while their political parties may spend an additional P10 million under the law.

Data on their ad spending were based on media entities’ published rate cards and did not account for negotiated or discounted rates that might have been given to the candidates. Even with generous discounts, the Pangasinan politicians would have likely surpassed the limits.

However, under Republic Act No. 9369, a person who files a certificate of candidacy is only considered a “candidate” at the start of the campaign period. In a landmark case (Penera vs. Comelec), the Supreme Court also ruled that “a candidate is liable for an election offense only for acts done during the campaign period, not before.”

Outside of Pangasinan, the three biggest spenders were Juanito “Kulot” Inojales (P31.7 million), who is running for mayor of Governor Generoso in Davao Oriental, Shella Go (P19.93 million), who is seeking a seat on the Davao Oriental provincial board, and Zamboanga City vice mayoral bet Elbert “Bong” Atilano (P17.88 million).

Between the 2010 and 2019 polls, a total of 1,961 politicians were charged with overspending. Comelec’s campaign finance office (CFO) has filed petitions for perpetual disqualification against over 500 of them, records showed. At least 31 politicians were already perpetually disqualified “with a certificate of finality,” the CFO said.

All were local candidates, according to data obtained by PCIJ. Their names were removed from the official list of candidates.

Retired Comelec commissioner Luie Tito Guia acknowledged that the legal spending limits could be inadequate at times for local campaigns. “The policy formulation should be informed how much a candidate really needs to put up a decent fight,” Guia, a lawyer, told the Philippine Center for Investigative Journalism (PCIJ) in an interview.

Lawyer Izah Katrina Reyes of the Legal Network for Truthful Elections (Lente) agreed. She said expenditure limits were “unrealistic,” as the prevailing rates have remained unchanged since the passage of RA 7166 in 1991.

In Navotas City, where there were 145,806 registered voters in 2019, candidates are only allowed about P440 million in campaign expenses. Rival candidates in the city would have surpassed spending limits if reporting included their expenses before March 25.

Navotas City Rep. John Reynald “John Rey” Tiangco spent P2.57 million to boost posts on his official Facebook page between Aug. 4, 2020 to March 24, 2022, according to Meta’s Ad Library, a public database of advertising on its platforms, including Facebook, Instagram, and Messenger.

The Tiangco brothers, both incumbents, hope to switch elective posts in the coming polls, a move that has allowed them to go around term limits and stay in power.

Mayor Toby is running against Lutgardo “Gardy” Cruz for the seat in the House of Representatives. Cruz served as vice mayor of Navotas before it became a city. Gardy’s son Raymond “RC” Cruz will also be challenging John Rey for the mayoral seat.

The Cruz father and son have also posted ads on Facebook. According to Ad Library data, Gardy placed P2.15 million worth of ads on the platform, making him the third highest ad spender, while RC ranked fourth with P1.4 million.

Other local candidates have also resorted to Facebook to promote their campaigns. END