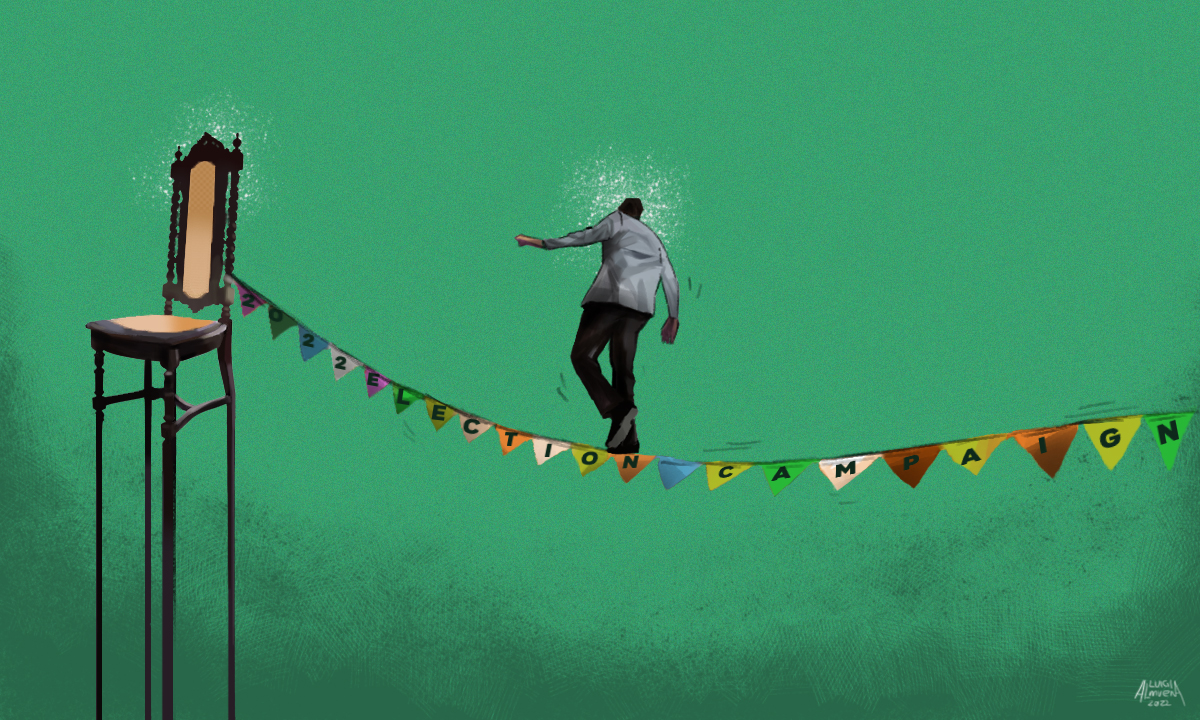 ‘Richest’ candidate Pacquiao scrimps on ads, others spend more than their net worths

Many candidates’ wealth declarations, based on their SALN documents, suggest heavily reliance on donors to fund their campaigns.

BY CARMELA FONBUENA WITH RESEARCH ASSISTANCE FROM MARTHA TEODORO May 05, 2022

This is part of a PCIJ report on political advertising in the 2022 elections. Read the full report here.

Most candidates in the 2022 elections cannot afford the cost of their ads and must have relied heavily on donors, based on their declarations in their Statement of Assets Liabilities and Net Worth (SALN), a document that public officials are required to submit annually.

Even former public works secretary Mark Villar, the top spender in the 2022 elections so far, could not have afforded to pay for his own campaign.

He reported a net worth of P1.4 billion in his 2021 SALN. He has aired ads worth more than P2 billion based on rate cards from January 1, 2021 to March 30, 2022. Although his campaign team may have enjoyed discounts — up to 30% discount during the campaign period under the law — the data on ad spending does not include the cost of producing those ads and the fees paid to talents who appeared in them.

The other candidate to breach P2 billion, Sen. Joel Villanueva, only declared a net worth of P33 million in his 2020 SALN.

But the richest candidate in the 2022 elections, based on SALN declarations, didn’t spend much on ads.

Sen. Emmanuel Pacquiao, who reported a net worth of P3.2 billion in 2020, has aired only P11.6 million worth of ads as of March 30, including ads where he appeared with his running mate Rep. Lito Atienza.

Pacquiao’s total spending is expected to increase when the ad expenditures from the rest of the campaign period are added. 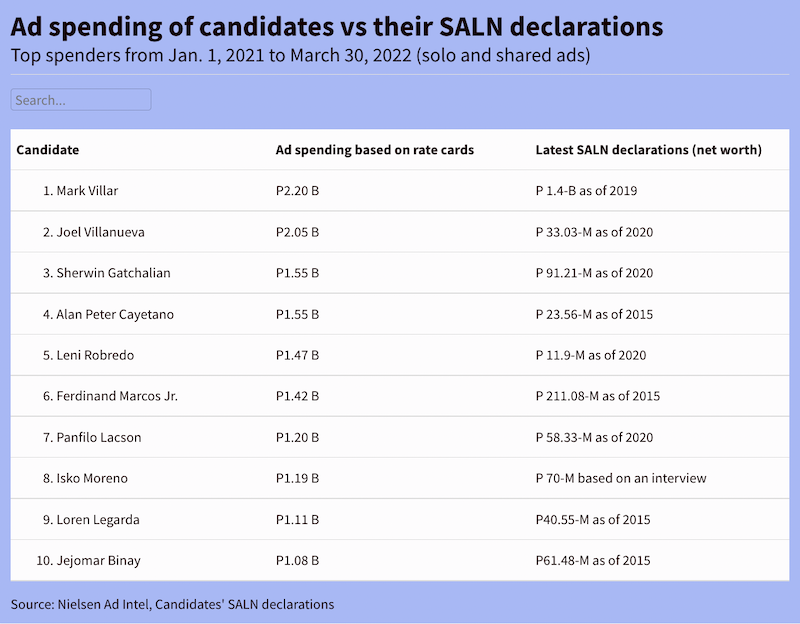 Candidates in the 2022 elections have run ads on mainstream media worth more than P20 billion from January 2021 to the end of March 2022 or halfway through the 90-day campaign period, demonstrating the increasing cost of electoral campaigns in the Philippines.

Computations by the Philippine Center for Investigative Journalism (PCIJ) showed that total ad spending before the campaign period, which began on Feb. 8, amounted to more than P14 billion. Many candidates slowed down on spending beginning Feb. 8 when ad limits took effect.

PCIJ acquired the ad spending data of candidates from media research outfit Nielsen Ad Intel. The database covers their spending on television, radio, print, and billboards based on rate cards or before campaign teams may have availed themselves of discounts.

Among presidential candidates, survey leader Ferdinand “Bongbong” Marcos Jr. and his closest rival, Vice President Maria Leonor “Leni” Robredo, topped ad spending. Marcos and Robredo each aired over P1.4 billion worth of ads — including ads where they appeared with other candidates — during the 15-month period.

The total spending after the campaign could show more candidates breaching the P2-billion mark. The database so far only covers about half of the 90-day campaign period or until March 30, 2022. END