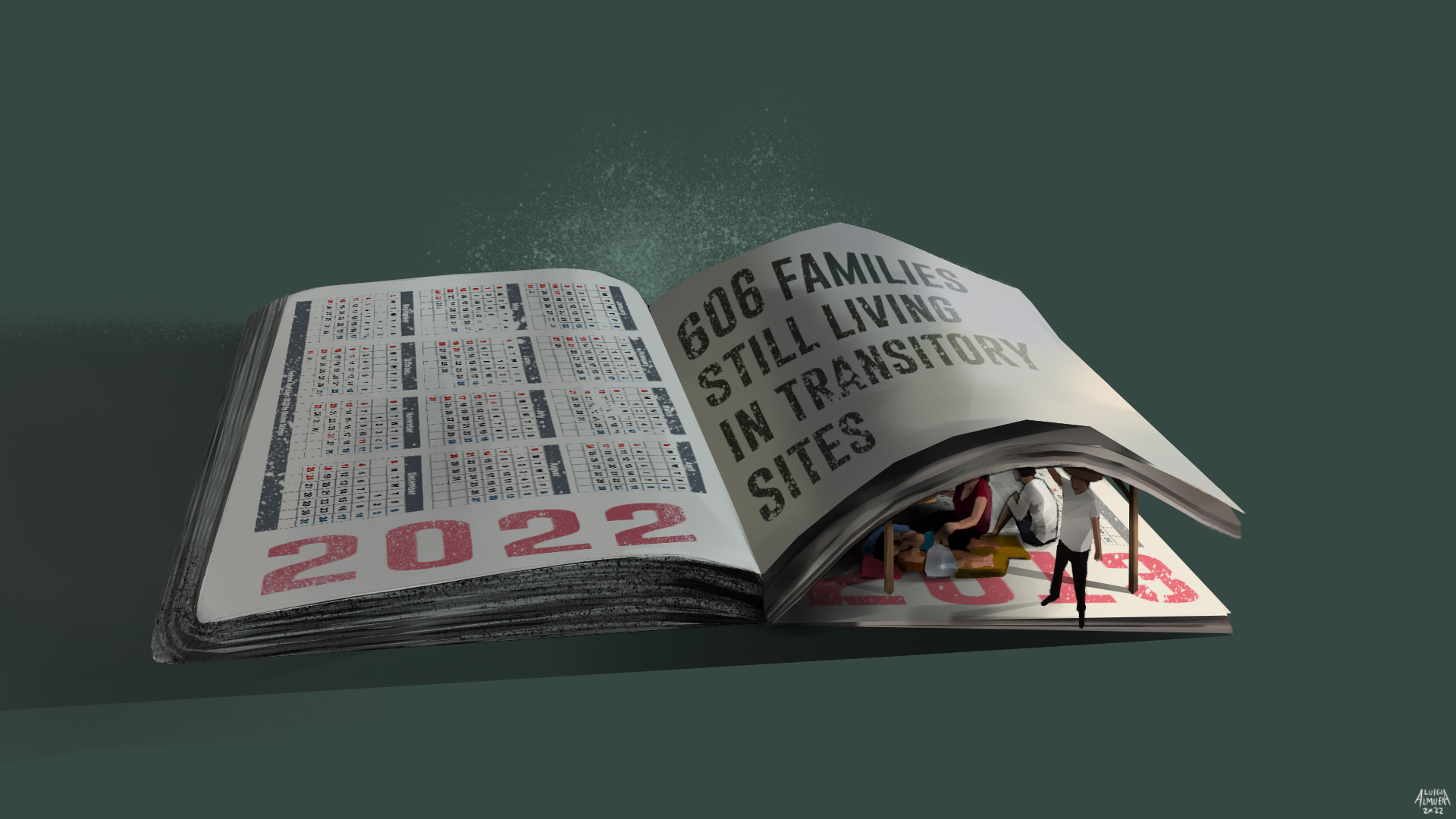 The next Philippine president and the next mayor of Zamboanga City will jointly inherit the responsibility of completing the city’s recovery and helping the victims rebuild their lives.

Almost nine years ago, on Sept. 9, 2013, some three hundred members of the Moro National Liberation Front (MNLF) from neighboring islands and provinces laid siege to the coastal barangays of Zamboanga City in southern Philippines, prompting a three-week gun battle with security forces that flattened the homes of over 6,000 families.

More than 5,000 of those families have been given government shelters, but 606 more families or approximately 3,000 residents remain in transitory sites.

Nearly a decade after the siege, the Zamboanga Roadmap to Recovery, Reconstruction, and Rehabilitation (Z3R) Program had yet to complete 9.57% of the whole project, according to the National Housing Authority (NHA), which implements the Z3R.

Outside the program, there are “untagged” families also living in transitory sites that face uncertain future because they were excluded from the list of housing beneficiaries.

Meanwhile, many of those who were relocated to government shelters found it hard to find livelihood in their new communities.

The next president and the next mayor of Zamboanga City, whoever will win the two posts on May 9, will inherit the responsibility of completing the city’s recovery and helping the siege victims rebuild their lives. 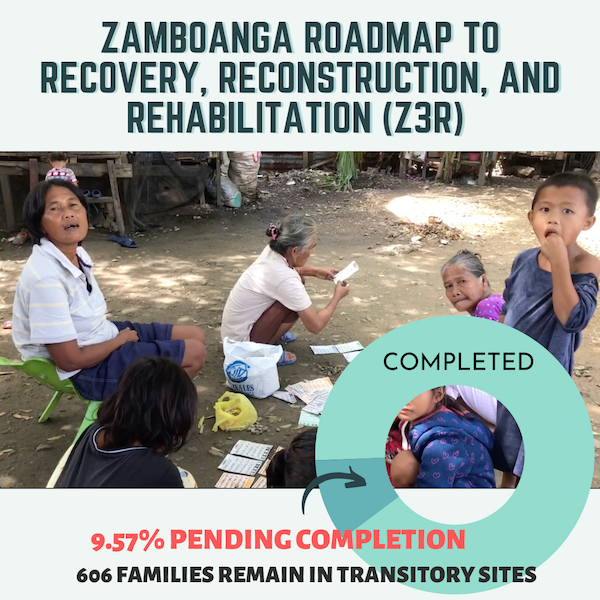 The houses on stilts are made of light materials, while the houses on land are duplex-loft type. The project also included the construction of footbridges and improvement of roads damaged during the 20-day gunbattle.

Records from the Housing and Land Management Division show that the majority of housing projects located in 21 different sites  have been completed under the Z3R Program. However, the quality of the construction projects came under scrutiny in 2018 following the collapse of a footbridge leading to houses on stilts in Brgy. Rio Hondo. This incident was captured in a video that had since become viral online.

The incident prompted two congressional hearings during the 17th Congress.

Four years earlier, in 2014, former Senator Rodolfo Biazon, then chairperson of the Joint CongressionalOversight Committee on Risk Reduction and Management, also inspected the housing projects under the Z3R following reports that a wall in one of the housing units in Tulungatung gave way.

During his visit, Biazon punched through a concrete wall as he was testing the structures. He conducted the same inspection in Lustre, Sta. Catalina, and other Z3R housing projects following reports of more substandard units.

The Tulungatung Housing Project is the biggest relocation site on land with 383 families, or approximately 2,000 residents, given permanent shelters a year after the siege. They are former residents of affected villages Mariki, Rio Hondo, Sta. Barbara, Sta. Catalina, and Kasanyangan who previously stayed at the Joaquin Enriquez Memorial Sports Complex. The gym served as the biggest evacuation center following the siege.

Many residents found jobs as laborers at canning companies near the resettlement site located in Brgy. Tulungatung, while many others made a living as fish vendors.

Not everyone was able to find livelihood, however. Aksa Abarasa Badayan and his family were among those who relocated to Tulungatung. The former public utility jeepney driver from Barangay Rio Hondo said his driver's license had expired and he didn’t have the money for new driving lessons to renew it. He now depends on his children who sell fish and vegetables at a nearby market.

"Mabuti sana kung meron pa rin mag-tulong sa amin (It would be good if we continue to receive assistance)," said Hassan, who supports the children of her relatives.

The militants consolidated in Zamboanga City to raise the MNLF flag at the city hall, triggering the gun battles. After 20 days, authorities said 25 government forces and 183 militants were killed, while more than 290 other militants surrendered or were captured.

At least 12 civilians were also killed in the crossfire. Some of them were held hostage by the militants who used them as human shields.

The United Nations High Commissioner for Human Rights (UNHCHR) reported that a total of 119,714 individuals or 23,794 families were displaced during the siege. There were some 6,000 families who sought refuge with relatives and became internally displaced persons (IDP) while over 18,000 other families were housed in 70 different evacuation centers.

MNLF leader Nur Misuari faced rebellion charges for masterminding the siege, but he was never arrested. When Rodrigo Duterte became president in 2016, Misuari was appointed Special Economic Envoy to the Organization of Islamic Cooperation (OIC), a move that did not sit well with the victims of the Zamboanga siege.

Finally, after years of delay, in 2019 the Bangsamoro Autonomous Region in Muslim Mindanao was established, raising hopes for peace and development in the region. MNLF is represented in the parliament.

The next mayor of Zamboanga City will continue to face security challenges as other armed groups continue to operate on islands south of the region.

As to the victims of the Zamboanga siege, mayoral candidates acknowledged the work that the local government unit (LGU) will need to contribute to help the national government complete the remaining tasks.

Former Zamboanga City Mayor and 1st District Rep. Celso Lobregat said although the Z3R is implemented by the NHA,  the LGU should monitor the project to ensure the speed and quality of its implementation.

Lobregat noted that some housing sites are still without water and electricity supply to this date. He said there is also a need to verify the legitimate owners of the houses that were turned over to beneficiaries. He said some of them were not real victims of the siege.

Atty. Rommel Agan, incumbent vice mayor and UNA candidate for mayor, said every one displaced by the siege should be given permanent shelters. If elected into office, Agan said he will look into the profile of the victims who are still staying in transitory sites to determine if indeed they are IDPs of the 2013 siege.

He cited the Masepla Transitory Site which continued to host at least 120 families. These families are considered “untagged” or were not included in the list of housing beneficiaries.

The LGU previously claimed that these untagged families were victims of fire incidents and settled in Masepla in the hope of being included in the Z3R program.

But Agan said there is a need for the LGU to buy more properties to relocate and give quality houses not just to victims of the siege but also to those residing in danger zones.

Whoever wins in the May 9 elections, Zamboanga siege victims like Aridja Hassan have a simple wish: livelihood that will not require them to travel far from their relocation dwellings. Transportation has always been expensive for displaced folk like Aridja, but it is even more so now that fuel prices have soared since the onset of another war elsewhere in the world. END

This report was produced with the support of the Embassy of Canada in the Philippines that promotes the importance of capacity-building for journalists as an essential tool to ensure responsible reporting. The Philippine Center for Investigative Journalism had full editorial independence.

— PCIJ
Posted in: 2022 Elections, mindanao
In This Series
Latest Stories

THE STORY goes that in his younger, wilder days, Andal Ampatuan Sr. — patriarch of the powerful family that holds sway over Maguindanao and much of the Autonomous Region in Muslim Mindanao — used to ride a horse as he led a band of armed men in forays to hinterland villages.