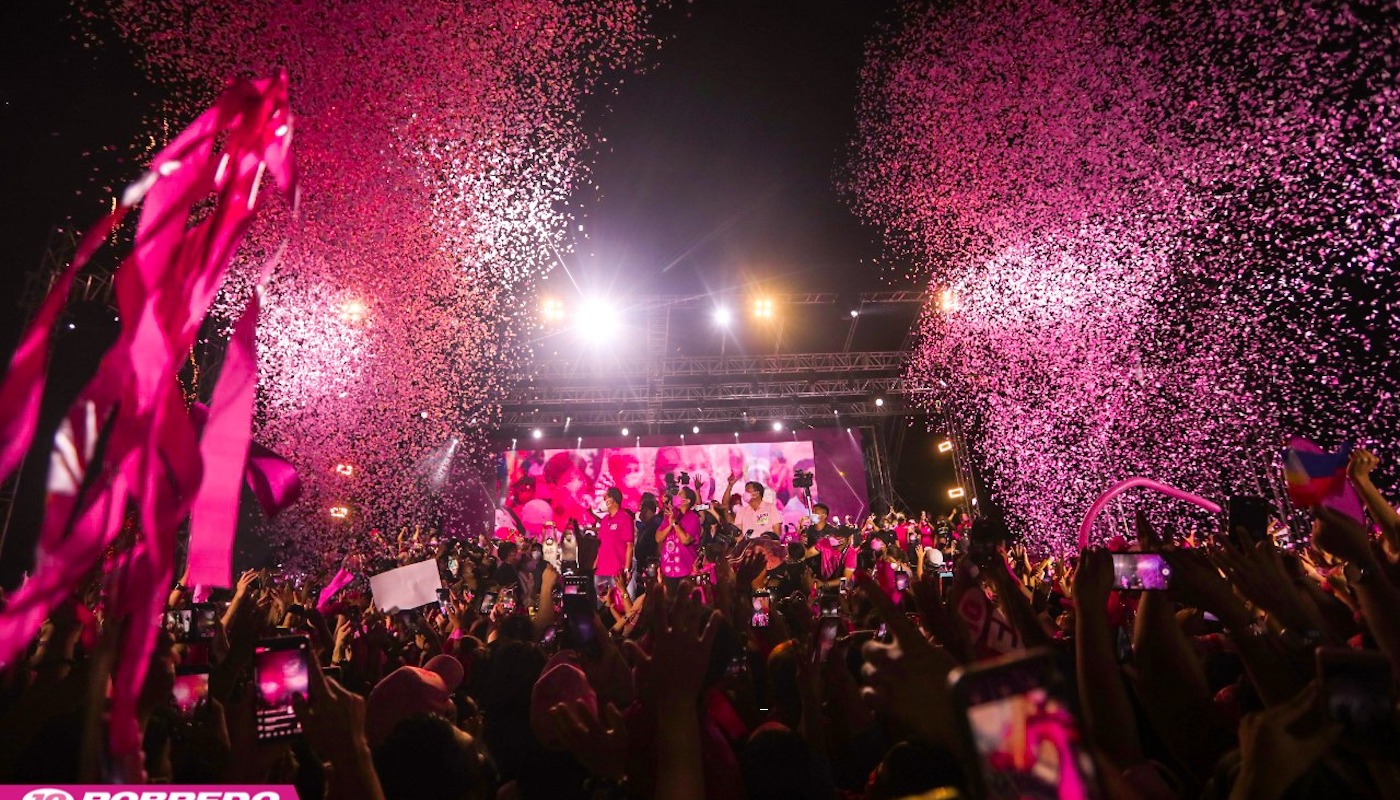 Feb. 25 is a non-working holiday in the Philippines, but President Rodrigo Duterte never attended the EDSA commemoration rites and merely issued official statements prepared by staff. If Marcos wins, who is to say if the historic event will be celebrated at all in the future?

The music blared and the huge crowd roared in cheer — many shone lights from their mobile phones — as the pink truck of presidential candidate Maria Leonor “Leni” Robredo, entered the Iloilo Sports Complex on the night of Feb. 25.

Her campaign rally in the vote-rich province in central Philippines mustered an impressive crowd of up to 40,000, according to estimates.

The program was packed with celebrities but Robredo, the country’s vice president, was the clear star of the night, along with daughters Aika, Tricia, and Jillian. Together, they jammed to the live performance of rock star Ely Buendia, whose mini concert bookended the event.

It’s an important night in the campaign, the anniversary of the 1986 EDSA People Power Revolution, a popular uprising that ousted the late dictator Ferdinand Marcos. He ruled a violent regime and had kept himself in power for two decades.

Thirty-six years after EDSA, the dictator’s son and namesake, former senator Ferdinand “Bongbong” Marcos Jr, is paving the family’s return to Malacañang. He enjoys the support of majority of voters — 60% versus Robredo's 16% based on the latest Pulse Asia survey — buoyed by loyalists who have rejected, forgotten, or have no memories of the brutality of his father’s regime.

According to human rights group Amnesty International, up to 70,000 people were imprisoned, 34,000 were tortured, and 3,240 were killed during the Marcos dictatorship.

A low crowd turnout in Iloilo would have dampened the legacy of the 1986 People Power uprising and the campaign of Robredo, who gets support from the EDSA forces.

Iloilo delivered and it was no surprise. In the 2016 vice presidential election, Robredo got 573,729 votes compared with Marcos’ 94,411. It’s the bailiwick of Liberal Party Sen. Franklin Drilon, who delivered P30 billion in government projects in the last 15 years, based on his own declaration.

But Robredo will need to work hard to maintain this voter margin on May 9. She is supported by Iloilo City Mayor Jerry Treñas and the Defensor political clan, but members of the Garin, Biron, and Tupas political clans have expressed support for Marcos

On the campaign stage, Robredo honored the memory of EDSA by calling upon the voters to muster the same strength that toppled a dictator in 1986.

“Ganitong enerhiya ang muli nating binubuhay ngayon. Ganitong lakas ang muli ninyong ginigising (This is the energy we want to bring back. This is the power we want to awaken),” she said.

“Kailangang sama-sama tayong kumilos para matugunan ang kahirapan, ang gutom, at ang kawalan. ‘Yan ang malalaking problema ngayon, at People Power ang kumikilos, ang tumataya, ang nakikibahagi kasama ang mga lider na may prinsipyo,” he said. (We need to work together to address poverty, hunger, and hopelessness. These are today's biggest challenges and it is People Power when we work together and take our chance with principled leadership),” he said.

Robredo defeated Marcos in the 2016 elections by less than 300,000 votes. She said she was not discouraged by her survey numbers.

She has managed to draw big crowds since the start of the campaign on Feb. 8, encouraging her supporters. 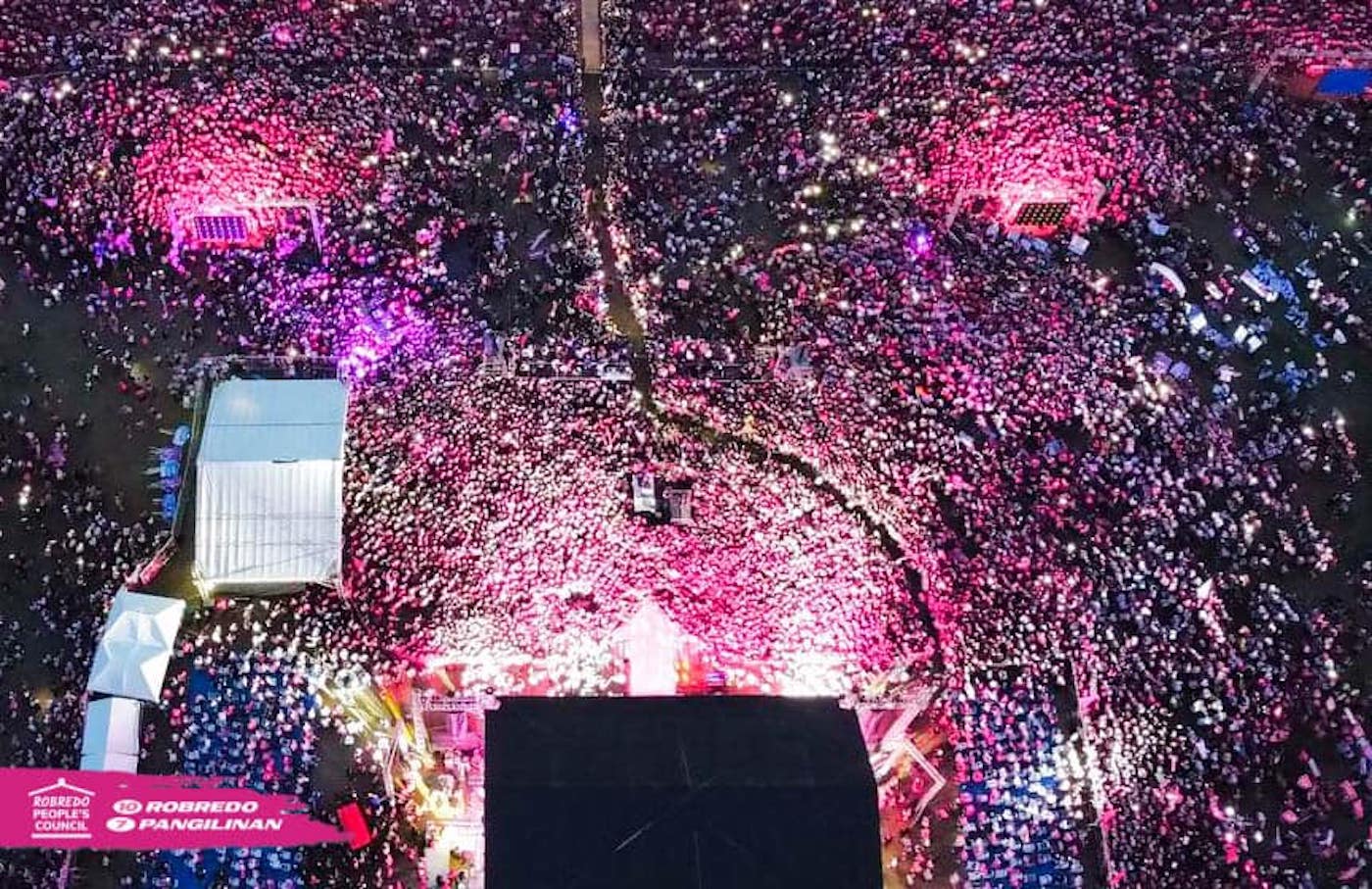 As Robredo’s supporters celebrated their biggest crowd so far, Marcos allies in La Union province in northern Luzon looked forward to the return of the Marcoses to Malacañang.

“Nangabak tayon! (We have a winner),” La Union Rep. Pablo Ortega, a member of one of the country’s oldest political dynasties, declared before a crowd wearing red, the campaign color of Marcos.

For this crowd, democracy icon Corazon Aquino, who restored the country’s freedoms after the fall of the dictator, is the villain in the EDSA story.

People have realized, Ortega claimed, that the country was better under the Marcoses. The crowd cheered in agreement.

In reality, the economy was in shambles when Aquino took over from Marcos in 1986. "I believe actually that the country is progressing. We are not the basket case post-Marcos dictatorship economy that we were in in 1986.... We fixed that slowly. Ang problema, kulang 'yung inayos natin and (The problem was the interventions were not enough) it has resulted in high inequality," said Ronald Mendoza, dean of the Ateneo School of Government.

Ortega also hyped the inclusion of former Sen. Gregorio Honasan, a key player in the EDSA revolt, in the Marcos ticket. “Nagbabawi (He regretted it)."

Harry Roque, a human rights lawyer, also joined the Marcos ticket. He was once vocal about the “grave human rights violations committed during the Marcos regime.” He also supported efforts to institutionalize the indemnification of victims of Marcos’ Martial Law.

The La Union rally brought Marcos back to his home turf, the so-called “Solid North,” after a swing in the Visayas where he came face to face with protesters during one of his rallies.

Local politicians boasted of the votes the province delivered for Marcos in 2016 – 338,455 votes versus Ilocos Norte’s 298,786. They were confident the province would deliver for Marcos again on May 9.

The fraught remembrance of Edsa on the campaign trail showed a nation deeply divided over a historic event that was admired by the world.

The problem, according to world boxing champion and presidential candidate Sen. Emmanuel “Manny” Pacquiao, was the EDSA spirit was “lost due to corruption” that prevailed despite the fall of Marcos.

Pacquiao said he would jail the corrupt and impose life imprisonment without pardon if he won the elections.

But Sen. Panfilo Lacson said the voters should not forget the corruption that also happened during the Marcos regime.

Earlier in the week, Manila Mayor Isko Moreno Domagoso reminded voters in the Bangsamoro Autonomous Region in Muslim Mindanao of “who killed your kin.”

“We know how bloody it was in 1974 to 1981 in the lives of Muslims in Mindanao. For some of you, your grandfathers, siblings could not be found until now,” Moreno said, pertaining to the atrocities of the Marcos dictatorship. 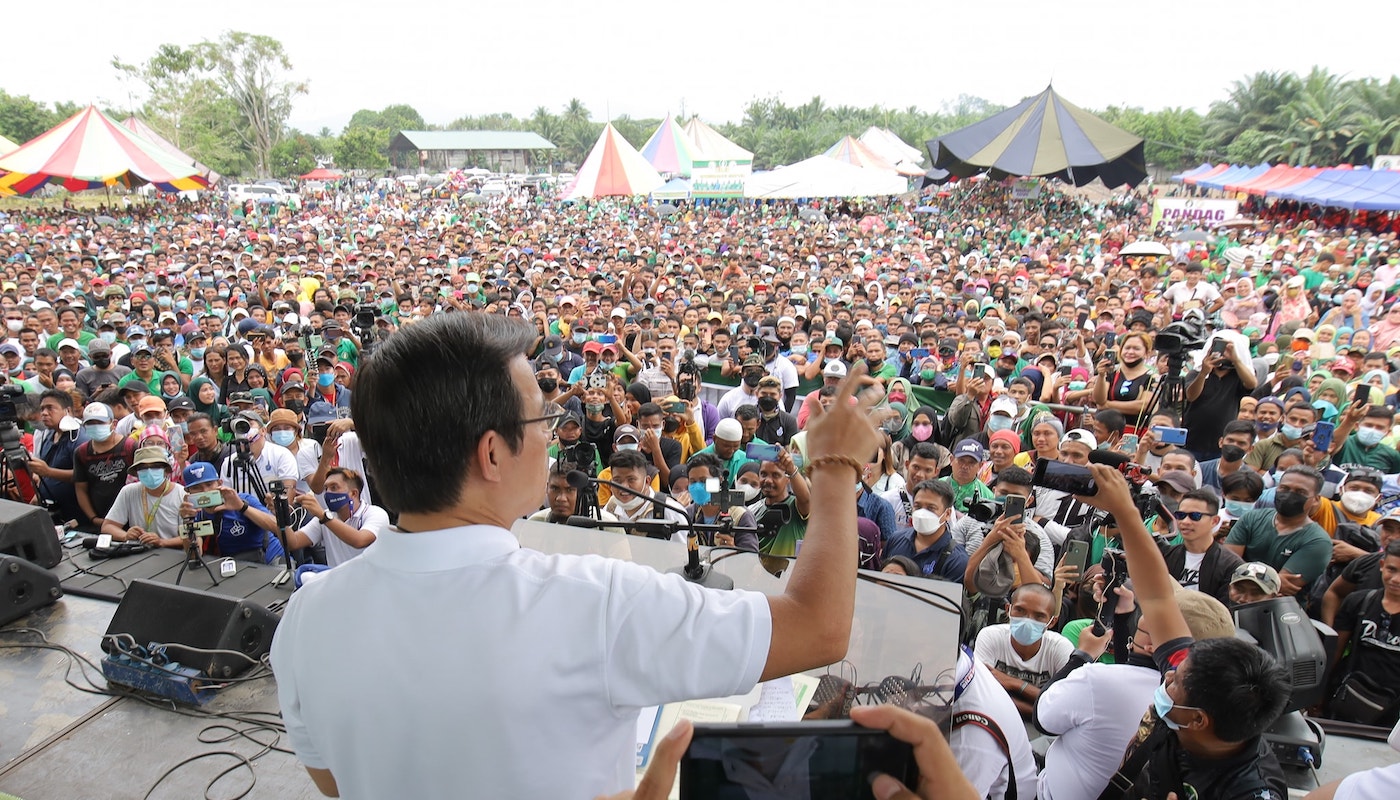 The rise of Marcos more than three decades after EDSA has been attributed by his critics to a massive disinformation campaign, particularly on social media, where his supporters pushed a revisionist version of Martial Law history and covered up the legacy of his father’s brutal dictatorship.

It is a propaganda campaign reminiscent of his father’s propensity to also peddle lies about himself to create a myth of superiority, said 2003 Ramon Magsaysay Awardee and PCIJ founding executive director Sheila Coronel, in a lecture on Marcos’ martial rule on Feb. 26.

Coronel cited the fictional “Maharlika” story that linked the late dictator to noble datus or chieftains of the pre-colonial age and portrayed him as “Malakas” of the Filipino creation myth. He also claimed to have 28 war medals, declaring himself as the most decorated Filipino war hero, but he got most of these medals by “lobbying  for them when he was already in public office.”

The son claimed to have earned a college degree at the prestigious Oxford University but this was denied by the UK university. He attended the university but didn’t pass the exams required to obtain a degree.

Traditional media have launched fact-checking efforts to correct lies that continue to spread during the campaign. But, as trust in news organizations has eroded through the years, voters have resorted to unreliable sources for information on the candidates.

A newly released Social Weather Stations survey found that 69% of adult Filipinos viewed the problem of fake news to be serious.

There’s about 10 weeks left in the campaign period. Marcos’ rivals are racing against time to change voters’ minds.

Feb. 25 is a non-working holiday in the Philippines, but President Rodrigo Duterte never attended the EDSA commemoration rites and merely issued official statements prepared by staff.

If Marcos wins, who is to say if the historic event will be celebrated at all in the future?

Robredo’s crowd was defiant. “Hindi pa ito ang huling EDSA. Lalaban para sa mamamayan… (This is not the last EDSA. We will fight for the people… ),” read a placard in the Iloilo crowd.

There was a small crowd of Robredo supporters that marched on the streets of La Union’s capital city San Fernando earlier in the day, too.