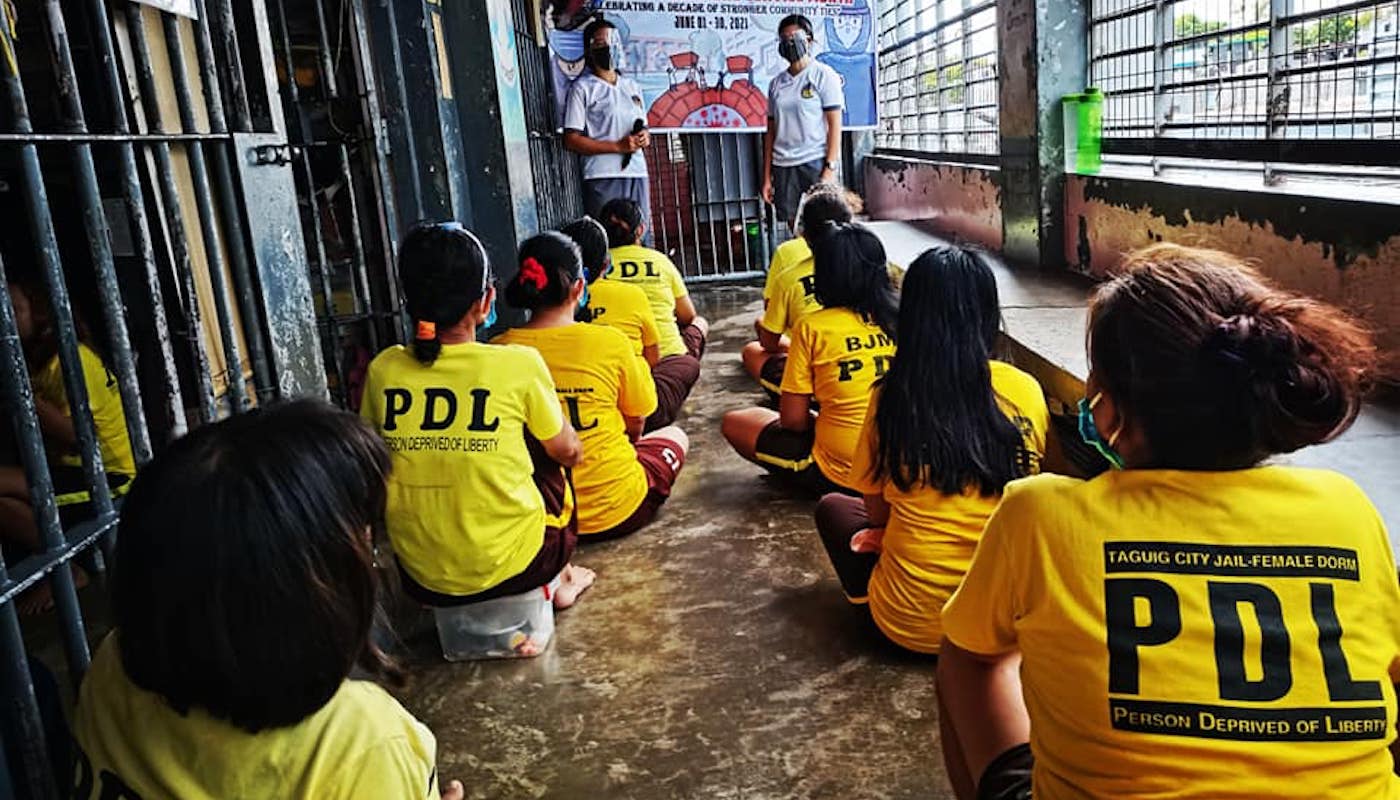 Still, Aya endeavors to do the “e-dalaw” (electronic visits) every week. Since the pandemic began, the Taguig City Jail Female Dormitory inside Camp Bagong Diwa, where Aya’s mother, Rowena Rosales, has been detained for more than three years now, has been on lockdown. No physical visits, no outsiders.

Every Sunday, from 9 a.m. until 11 a.m., Rowena and the other detainees in her floor on the female dorm would line up to use the cell phones and tablets provided by the Bureau of Jail Management and Penology-National Capital Region (BJMP-NCR) in the lobby. They have five minutes to talk to their loved ones.

“All we can manage is just a quick ‘Hello, how are you? Have you eaten?’. I ask her to make a list of her needs, then she dictates the list for a few minutes, or we ask the guard to allow her to send a picture of the paper so that it will be easier. We have no time to really talk to each other,” Aya said, in an interview with the Philippine Center for Investigative Journalism (PCIJ).

But the difficulty that Aya and the other relatives of detainees in Taguig City Jail Female Dormitory experience is nothing compared with the experiences of the detainees themselves. Like many jails in Metro Manila and across the country, this jail is overcrowded.

“When I last visited the jail, there were about 70 to 80 people in the cell where my mother was detained. Two to three people share one ‘tarima’ or cot. Many sleep on the floor and on the hallway,” Aya recalled.

“Overcrowding is really an issue there, as well as all the consequent effects to the physical health of the detainees. The other effect is to their mental health. There is the violence and the conflicts among the detainees themselves,” said women’s rights activist Sharon Cabusao, who was detained in Taguig City Jail Female Dormitory for a year in 2016.

Cabusao said that when she was detained at the facility, some fights erupted because the detainees were too close to each other.

Sometimes, the jail guards became too strict on the detainees. “It did not happen to me because I was quite assertive. But in the case of other prisoners, for instance, when one was wearing shorts and an on-duty official did not like it, the detainee wearing shorts would get punished,” Cabusao recounted.

When the pandemic happened, BJMP-NCR quickly locked down the facility. There were reports of an outbreak among prison guards – but this was denied by jail officials. In April, after more than a year of lockdown, electronic visits were allowed. By September, the detainees were finally vaccinated with the single-dose Johnson & Johnson Covid-19 shots.

This is the reality faced by persons deprived of liberties (PDLs) amid the pandemic. What makes it more difficult for Aya is that her mother is an activist, and therefore deemed by the Duterte administration as an “enemy of the state.”

As of September 2021, there were over 700 political prisoners or detainees in the country, according to the human rights group Karapatan. A majority of them, or 475, were detained under the Duterte administration. More than 130 of the political prisoners were women.

The Philippine government denies that individuals like Rowena Rosales, as well as her husband Oliver, were detained because of their political beliefs.

But a US colonial-era law, Executive Order No. 65 s. 1945, signed by President Sergio

In the Rosales’ case, their political activities involved organizing government employees into unions under the Confederation for Unity, Recognition and Advancement of Government Employees (Courage). The official reasons for their arrest were that they had, in their possession, two handguns and a grenade.

Illegal possession of firearms and explosives is a non-bailable crime under Philippine laws.

Cabusao said that one of the most difficult things to deal with for her was being detained knowing she did not commit any crime and was in fact contributing to society as a human rights advocate.

“Every morning, we were gathered to sing ‘Lupang Hinirang’ (national anthem) and were required to say a pledge. That pledge was something like a guilt trip. In the first place, we did nothing wrong. Why would I do that pledge? I have nothing to be remorseful of. I also could not sing the national anthem – something that I found was a really beautiful musical composition prior to my detention. I found it hard to sing the song inside the jail, because in the first place I did not belong there. Everything was imposed upon me,” she said.

Aya remembered that day, Aug. 11, 2018, as if it was yesterday. She did not have an inkling of what would happen to her family for the next three years. 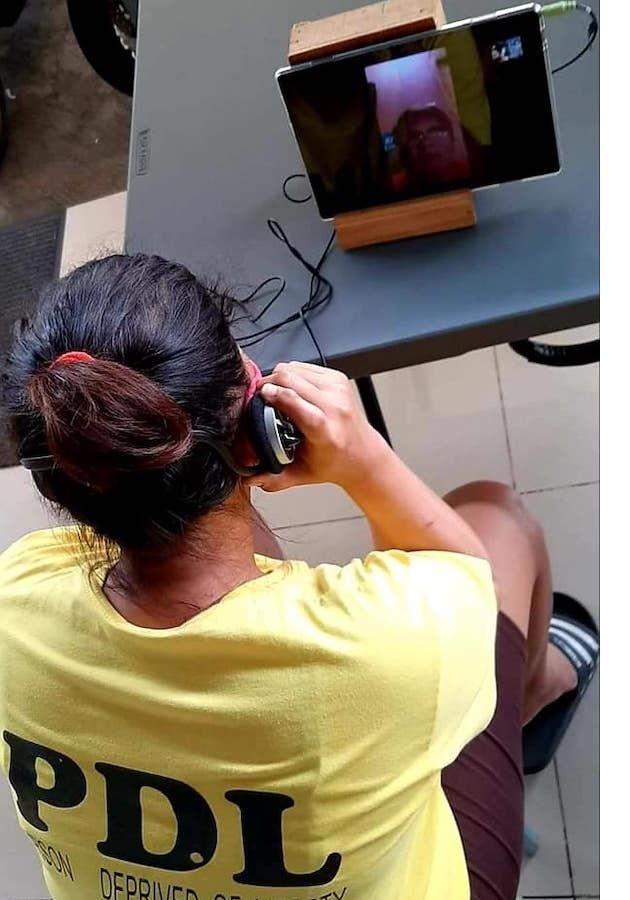 It was a rainy Saturday afternoon, Aya recalled, when her parents went out to sell goods at their store in a public market near their house in Balagtas, Bulacan. “I was texting with my mom. She asked me to buy snacks for my younger brother,” she recalled.

By 7 p.m., her mother stopped responding to her texts. “I asked her if they would bring us dinner, but she did not respond,” Aya said. She initially thought that her parents got stranded since it was raining heavily that night. She was worried that the tricycle that her father was driving got stuck in the flood as it usually did. So she asked her grandfather to go with her and look for her parents.

Aya and her grandfather went to the market and saw that their store was closed. Her parents were nowhere to be found.

“We then went to the nearest police station. There we found our tricycle. But my parents were not there. When we asked the police, they told us that elements from CIDG came to arrest some people. But they would not confirm who was arrested,” she said.

Aya, her grandfather, and uncle went to the Criminal Investigation and Detection Group (CIDG) at Camp Crame in Quezon City to check if her parents were brought there.

The authorities at Camp Crame refused to confirm with Aya that her parents were in their custody.

“I begged them to let us go in, but they refused. They asked us to return in the morning. We returned at about 5 a.m. the next day because we were worried about what might happen to them [there]. We were let in by 7 a.m. I saw my parents there,” Aya recalled.

Through human rights lawyer Kristina Conti, they later learned that the couple were handcuffed and blindfolded before being dragged from their tricycle into a car the day before.

Aya said political detainees like her mother were not treated differently from ordinary detainees in Taguig City Jail. “But maybe the guards are stricter to political prisoners as regards books. They check the contents of the books. That’s our experience,” she said.

Inside jail, political detainees take on leading roles because of their training and experience as activists. They become medics, tutors, or even paralegal volunteers for their fellow detainees. Some, like Cabusao, serve as counselors for detainees and even guards and officials who have domestic problems or issues related to women’s rights.

“I felt proud of my mother because one time, during e-dalaw, with the five-minute limit, she asked me to relay to our lawyers some legal issues of her fellow detainee who was not a political detainee,” Aya recounted.

When she was an activist, Rowena was also a writer. Inside the jail, she helps other detainees who are illiterate or have no access to a lawyer to write their appeals. She studied paralegal work while in detention. Sometimes, she asks her daughter to help contact the Public Attorney’s Office to help out a detainee.

“The criminal gangs inside the prison complex were being allowed to hold concerts. On many mornings when I was there, I would hear drums and singing on one side of the building. On the other side, there were the Christian sects, worshipping, their sound system in full blast. Inside the prison, every cell has at least one TV, in full volume. The noise can drive you crazy,” she recounted.

Outside, Aya and others like her also struggle to come to terms with their activist relatives’ incarceration.

“In truth, I had no time to process what really happened. My grandfather and my brother, all they knew was that we were a typical Filipino family. They could not turn to anybody but me,” she said Aya.

She continues to feel the anxiety of dealing with the extraordinary situation, in addition to the financial burden of having two parents, both breadwinners, in jail. The pandemic added a new layer of stress to her, Aya said. Despite these challenges, Aya, the eldest sibling and an activist in college, has no choice but to soldier on.

“My only wish is to be with them. If that does not happen this Christmas, I at least wish for them to eat their favorite food. We have a tradition of eating well during Christmas, and doing this gives them comfort. We long to visit them, to at least embrace them. That would be okay for me for now,” Aya said.

— PCIJ
Posted in: prisons
In This Series

This prison education experience in Davao City Jail proves that illegal drug offenders can change their lives for the better if given the opportunity.