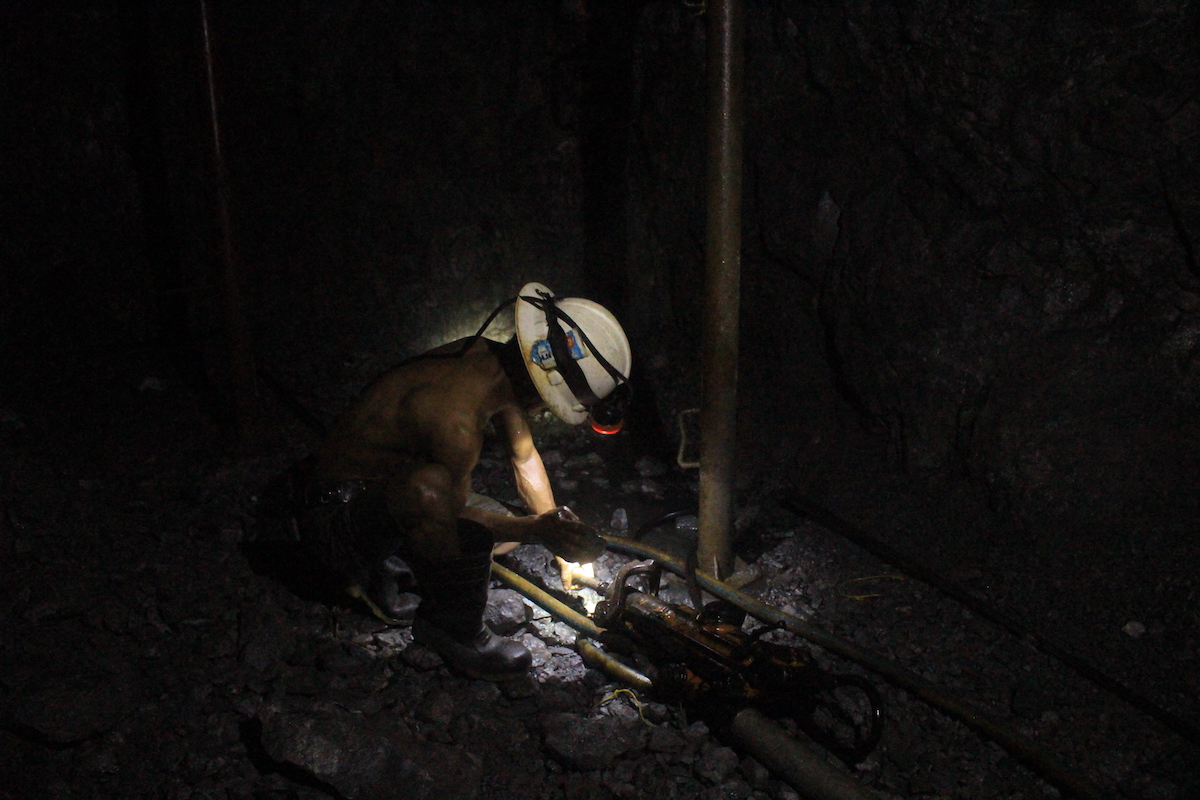 The Department of Environment and Natural Resources is evaluating 100 new mining projects as the nine-year ban on new permits is lifted. Doubts are raised over a government projection that it will earn additional P21 billion in annual revenues, however.

“It is unsound environmentally and bad from a governance point of view.”

He is not convinced that it will help the country’s economic recovery without a fair revenue-sharing scheme. He called for a new law that would define government and community shares from mining profits.

“This (economic recovery) is exactly what was promised in 1995 when the Mining Act was enacted, but soon everything bogged down under the sheer weight of the enormous opposition against mining as well as the technical incompetence of the DENR (Department of Environment and Natural Resources) bureaucracy to process even a small number of agreements,” La Viña told the Philippine Center for Investigative Journalism (PCIJ).

“Many of those mining agreements are in protected areas, tourism areas, critical watersheds, and prime agricultural areas. They do not stand a chance in serious environmental assessment proceedings,” he said.

Former Supreme Court Senior Associate Justice Antonio Carpio, who dissented on the high court’s 2004 ruling on the constitutionality of Republic Act 7942 or the Mining Act of 1995, also pushed for a new mining law that will increase people’s share in the profits to 50%.

He doubted a government projection that it would earn P21 billion in annual revenues from 100 new mining agreements the DENR was evaluating.

“P20 billion (from excise taxes), based on 100 new mining agreements, is highly unrealistic. And if actually realized, is a horror in terms of degradation of the environment,” Carpio told PCIJ.

Duterte signed EO 130 on April 14, 2021 to amend EO 79 issued by former president Benigno Aquino III, which banned new permits until the passage of  a new law rationalizing revenue-sharing between mining companies and the government.

In lifting the ban, Duterte’s EO cited Republic Act No. 10963 or the Tax Reform for Acceleration and Inclusion (TRAIN). It doubled the rate of excise taxes on minerals, mineral products, and quarry resources to 4% from 2%.

DENR Undersecretary Jonas Leones earlier dismissed criticisms against the new EO and underscored its potential to help in the country’s economic recovery after the contraction caused by the Covid-19 pandemic.

“We can use our resources to generate necessary income for our economy,” Leones said in an interview on state media PTV-4’s “Laging Handa” program on April 19.

He said the government would generate a total of P21 billion in revenues from 100 new mining agreements it was evaluating – 35 mining projects  under Phase 1 and 65 others under Phase 2 of the implementation of the executive order.

“This is just an expected potential figure – P20 billion for excise taxes and P1 billion annually for royalties out of the 100 pipeline projects,” Leones told PCIJ.

He admitted that it would take some time for EO 130 to make an impact on the national economy, but local communities would see its immediate effect.

La Viña thinks it will take longer as the gestation period does not include the time to get social acceptability and conduct an environmental impact assessment (EIA). It could take up to 10 years or more if there is opposition, he said.

In a statement, Environment Secretary Roy Cimatu said the DENR would carefully review pending mining applications to ensure compliance with environmental rules and regulations and that the benefits outweighed the risks.

“There is no automatic approval even if these mining applicants submit all the requirements,” he said.

But the DENR has no capacity to assess 100 new mining agreements “even if they took a decade to do it – unless they will do it in a token way and violate their own procedures,” La Viña said.

Leones cited the Silangan mine in Surigao Del Norte as one of the big-ticket projects on the DENR  priority list. It has a funding requirement of $700 billion.

But this is not the case for other projects being reviewed, La Viña said.

La Viña and Carpio said increasing the mining excise tax to 4% from 2% was not sufficient.

“With mining revenue lopsided in favor of the mining company, the government is not able to have resources to support effective mining governance at both national and local levels,” said La Viña.

Carpio called the government’s 4% share of gross mine output a “pittance.”

“It’s not even enough to clean up the environmental damage and maintain the toxic ponds which will remain with us for eternity,” said the retired magistrate.

They pushed for a new mining law that would give communities a fair share of profits from mining.

La Viña said the community should get at least 20% in royalties while indigenous peoples should get an additional 15% share of the profits.

Carpio wanted a higher share for the people. He pushed for a 50% share of the net proceeds of mining operations, which he said would be lower than the 60% that people get from oil and gas.

The mining companies should also cover the environmental cleanup and maintenance of toxic ponds for eternity, as well as payments of all business and income taxes that other corporations normally pay, Carpio said.

The Commission on Audit and the Department of Finance have called for the imposition of 5% royalty fees on all mining projects. Currently, only mining projects inside mineral reservation areas (MRAs), which the government maintains, are paying 5% royalties.

“The financial regime will have to come from Congress,” said Leones.

The Chamber of Mines of the Philippines (COMP), an organization of large-scale miners in the country, opposed this, however.

“Imposing additional royalties on Philippine mining projects outside [MRAs] will stunt the industry’s growth and will provide additional revenues only in the near term, which we believe is shortsighted,” COMP vice president for communications Rocky Dimaculangan was quoted by Inquirer.net as saying.

Two documents will be reviewed before the DENR decides to grant new mining agreements, according to Cimatu. These are the Final Exploration Report and the Mining Feasibility Study.

For metallic mines, Cimatu said the Final Exploration Report should show that the delineated mineral resources and reserves have at least 10 years of mine life or commercial extraction life. For non-metallic mines, it should be seven years.

Meanwhile, the Mining Feasibility Studies should show that the cost of developing the mine can pay for operating costs, administration overhead, milling costs if there is a processing plant, environmental cost, social development cost, safety and health cost, national and local taxes, royalties, local government fees, other national government fees, and interest and charges on loans.

"It is also possible that new requirements will come up based on the newly issued Order. The MGB (Mines and Geosciences Bureau)-DENR-Department of Finance Working Group is set to convene to draft the Implementing Rules and Regulations of EO 130," he said.

• prohibition of developing or opening new areas until the mined-out areas have been progressively rehabilitated;

• rehabilitation of areas with the desired slope of not more than 50 percent slope (or 45 degrees) and proper drainages;

• establishment of buffer zones or no-mining zones to provide a buffer between the mining operations and rivers, and other important structures;

• establishment of a progressive rehabilitation fund with a minimum of P5 million;

• payment of the mine waste and tailings fee based on the amount of tonnage of mine wastes and tailings that the company generates every semester; and

• deposit to initial fund, equivalent to the average of 8% of the cost of the Final Mine Rehabilitation and Decommissioning Plan even before the mines start commercial operation.

Her orders were not immediately implemented, however, as Duterte called for a review in the wake of opposition from other members of his Cabinet. Lopez was also forced to step down from her post after the Commission on Appointments rejected her appointment.

Lopez’s successor, Cimatu, conducted a review of the mining companies. Leones told Laging Handa 13 mining companies were allowed to continue their operations while “two or three” were recommended for termination.

The government has not been transparent about its review of the operations of the 28 mining companies in Lopez’s list.

Government data shows the MGB has issued a total of 309 mineral production sharing agreements (MPSAs) so far around the country. Out of this total, 51 are in Surigao del Norte, Surigao del Sur, Agusan del Norte, Agusan del Sur, and Dinagat Islands in Caraga. Forty are in Zambales (Central Luzon), 36 in Calabarzon , 32 in Central Visayas, 26 in the Bicol region, and 19 in Samar and Leyte (Western Visayas).

Eighteen are in Davao Region. Most of these MPSAs are located inside or surrounding the Diwalwal Mineral Reservation. – with a report from Stanley Buenafe Gajete

— PCIJ
Posted in: Mining, mining in the Philippines
In This Series
Latest Stories

In Benguet, critics are dismayed and wary of environmental degradation and natural disasters. The Chamber of Mines of the Philippines is also waiting for Malacañang to resolve the suspensions and “move mining forward.”