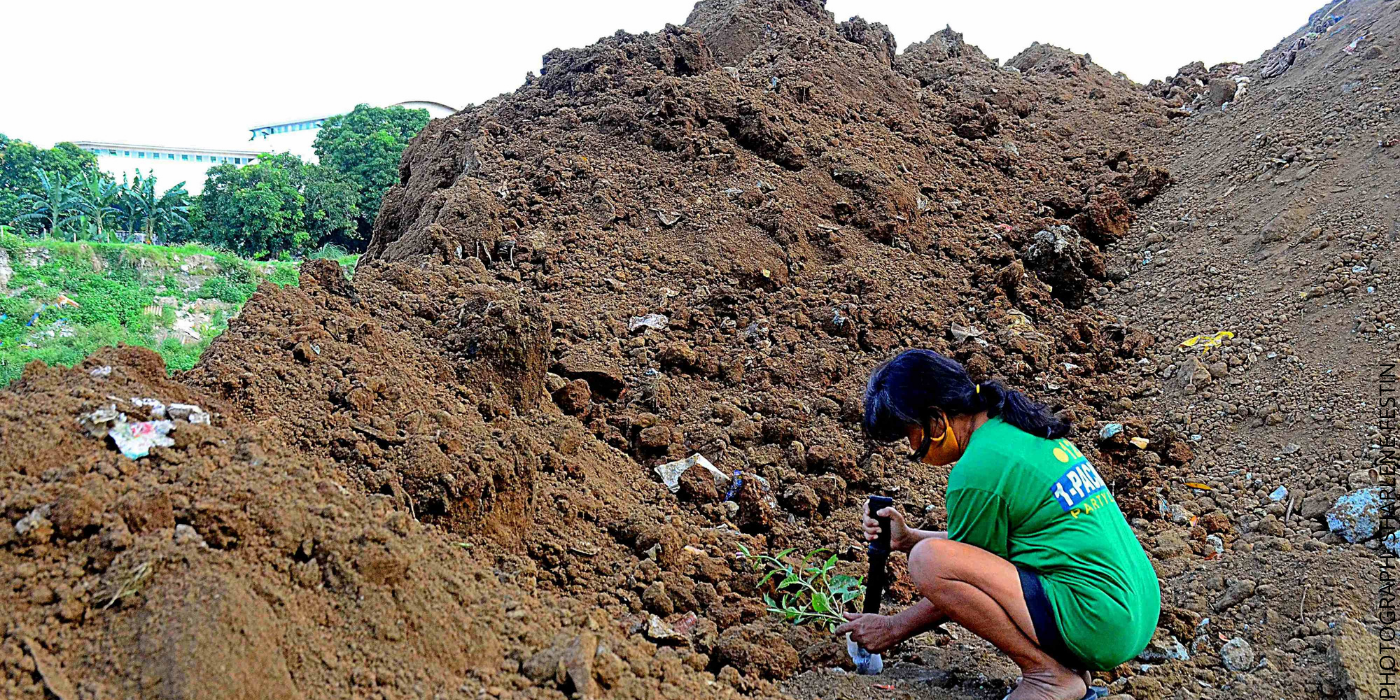 Residents of ‘Little Holland’ on the Marikina riverbank decry the loss of their precious plot of land, which used to supply them with vegetables. The urban garden is no more because of the need to dredge the river to help ease flooding during the rainy season. Residents like Lisa Villasor, 66, are upset and don’t want to plant again even if the city government gives them another plot of land.

Crossing the FVR Road in Marikina City, one steps into an oasis. Tall, decades-old trees filter sunlight, casting dappled shadows on tufts of grass. A few more feet into this shaded, parklike area and you come across vegetable patches—plots of sweet potato tops, radishes, native bok choy. And then you hear it, the sound of heavy machinery rumbling close by. You then realize that this isn’t exactly paradise.

A few meters away from this green space is Barangay IVC, also known as “Olandes” or “Little Holland,” because of the brightly colored residential facades that mark the community’s boundary. With a population of about 16,000, its residents are mostly daily wage earners or small business people in the informal economy. When the Covid lockdown was imposed in March 2020, hundreds lost their jobs. The floodwaters of Typhoon “Ulysses,” which left an estimated P20 billion in damage to life and property in November 2020, dealt the Marikina residents another heavy blow.

The vegetable patches, known as “The Garden” to Olandes residents, have existed for decades. Long-time residents, some of whom have lived in the area since the 1970s, attest to how this strip of fertile land along the riverbank measuring about 400 square meters has saved them from going hungry many times and has provided a means of livelihood to those who tended it.

>But The Garden is no more. In a bid to curb massive flooding during the rainy season, the Marikina city government and  the Department of Environment and Natural Resources (DENR), under the latter’s Task Force “Build Back Better,” began the Marikina River dredging project on Feb. 17, 2021 with the goal of returning the river to its original width of 90 meters and depth of 10 meters. The first site for dredging was the area where The Garden stood.

Losing her vegetable plot has hit Lisa Villasor, 66, hard. She sank into depression and spends most days wandering aimlessly on the riverbank. She has been growing vegetables in The Garden since she settled with her husband, Willy, in Olandes in the early 1980s, selling her harvest to neighbors and taking some home for food. They live with two of their three children in a tiny, rented room. Willy works as a barangay (village) staff member earning about P10,000 a month and about P8,000 of his pay goes to rent and utilities, leaving the family with just P2,000 or P66 a day to live on. She worries about feeding her family and is anxious about the future.

(That vegetable plot kept us alive when my husband was out of work. When we didn’t have money to buy food, that was enough to feed us. I managed to earn P200 to P300 every day.)

While residents who tended plots in The Garden understand the reasons for the dredging, they ask why it was their side of the river that was dredged first when there were other areas that encroached on the riverbank.

Marikina Councilor Manuel Sarmienta, who represents the city’s first district, explained that the area where The Garden stood was public land while the area on the other side of the riverbank had been titled, making it difficult for the local government to dredge without the owner’s consent. He said the DENR was investigating how several plots of land in other areas along the riverbank were illegally titled.

“That’s the sad thing about it,” Sarmienta said. “We explained the situation to the residents and told them we had to do it for the safety of all people who live close to the riverbank as well as make way for any future development in the area. The local government understands the residents’ concern on the loss of their means of food production and livelihood and we are finding ways to assist them.”

Lisa, however, does not put too much weight on government assistance, and believes whatever the officials dole out will not last long. She wants to plant and grow food again, because it made her feel useful.

When asked if she would plant again if a plot was made available by the local government, Lisa paused, then shook her head.

(I don’t want to do it anymore. It’s very difficult to live in poverty. They’ll take the land from you even if you tended it for years, because you don’t own it. Now we’ll have to live with hunger.) 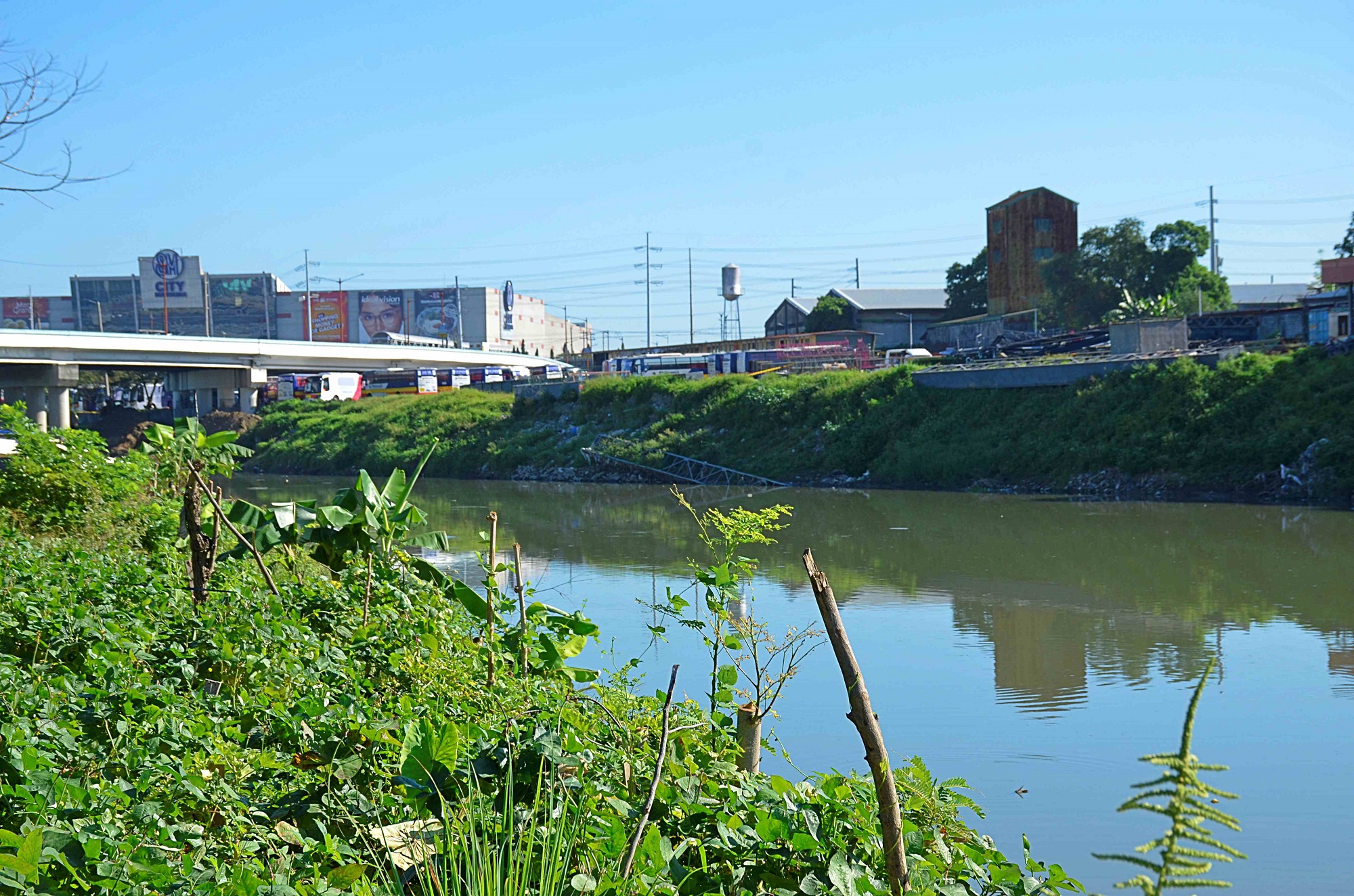 Trees, vegetables and other plants grow along the banks of Marikina River, providing shade and food to nearby communities. 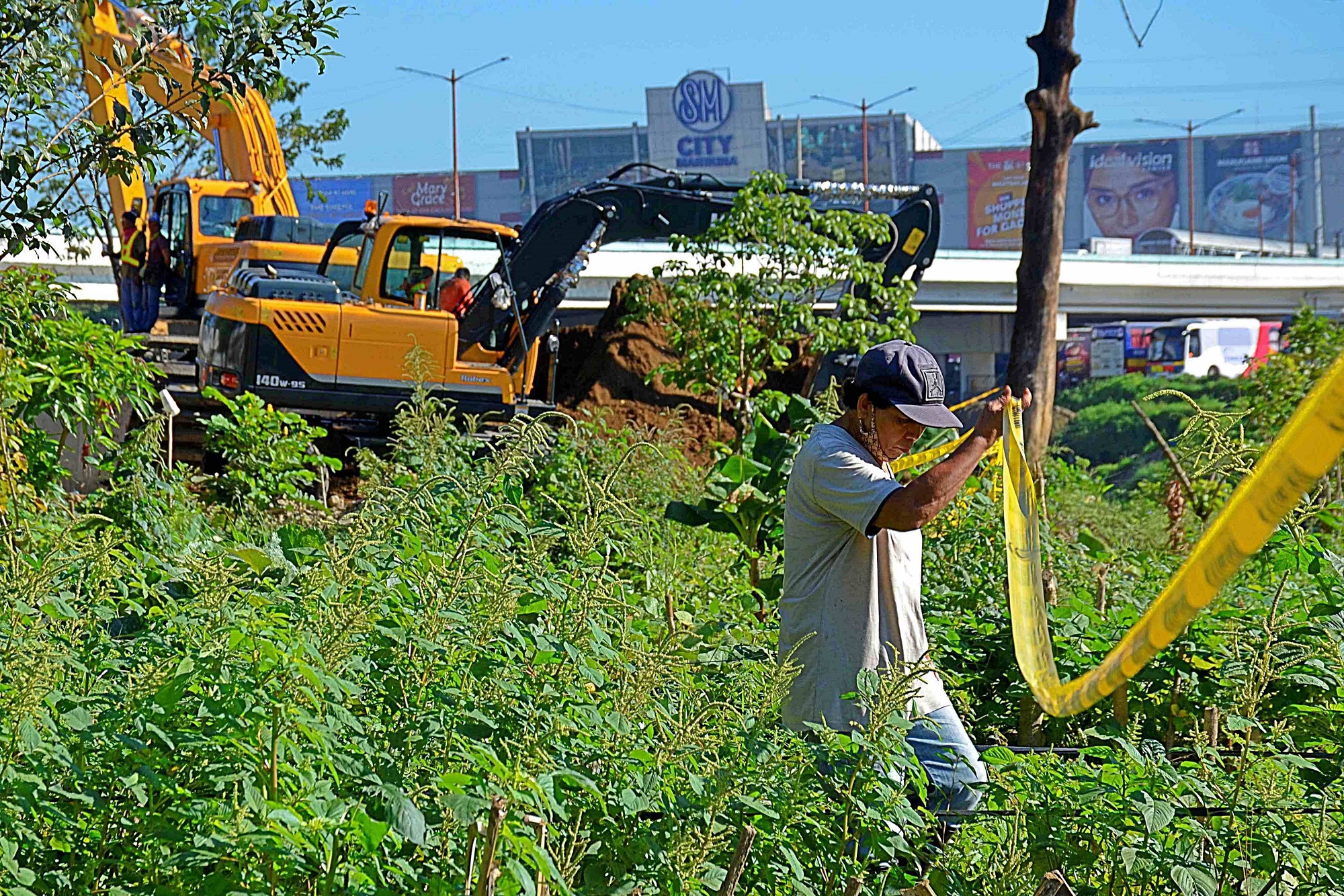 A resident of Barangay IVC, also known as ‘Olandes,’ crosses the yellow tape marking the area to be dug up by backhoes, to get to her plot of vegetables on the riverbank. 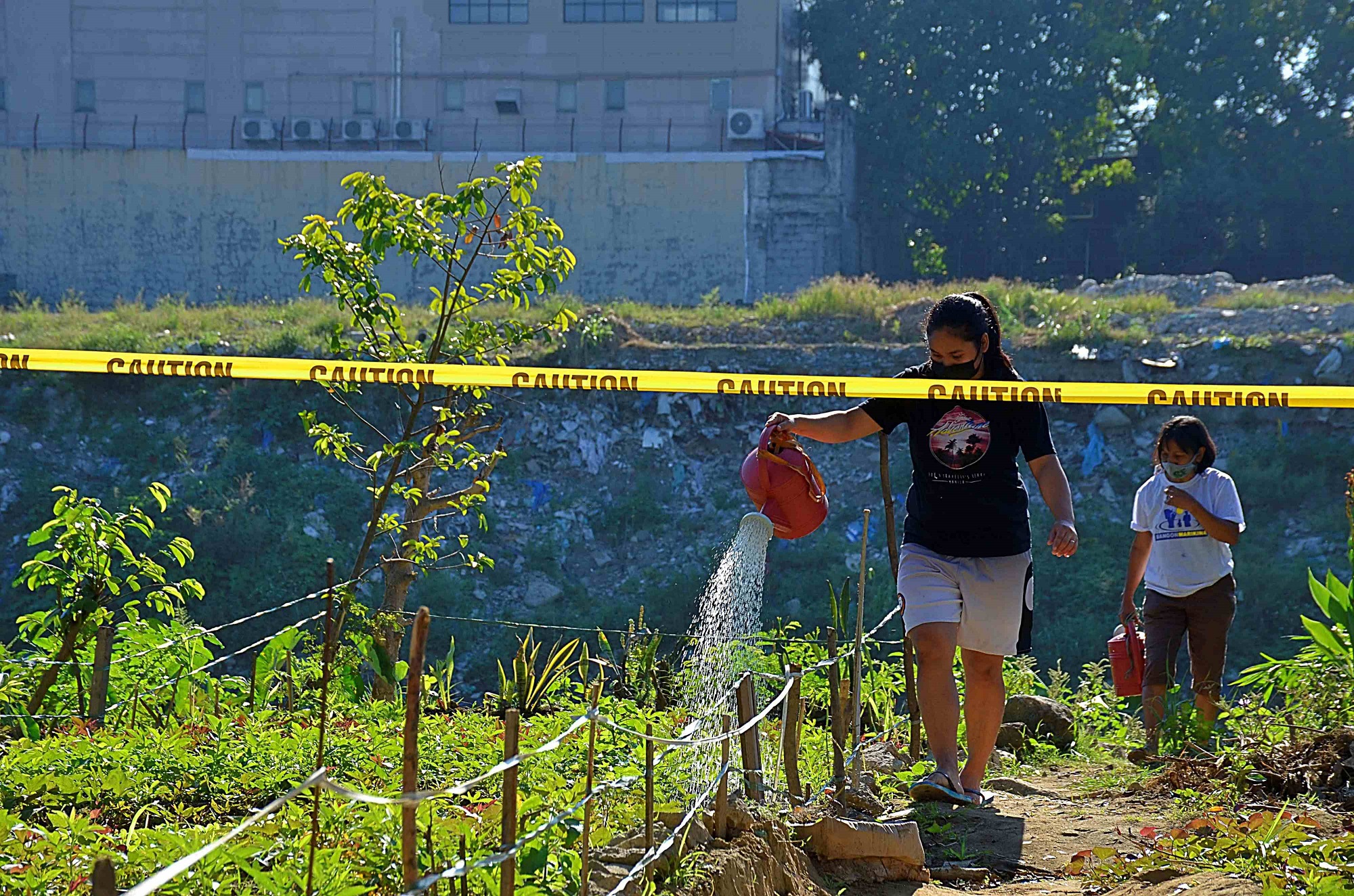 Early each morning, residents of Olandes troop to their small plots of plants and vegetables to tend to them. These plots have been here since the 1970s and generations of Olandes residents have fed their families and sent children to school from selling vegetables. They also shared their harvests with neighbors. 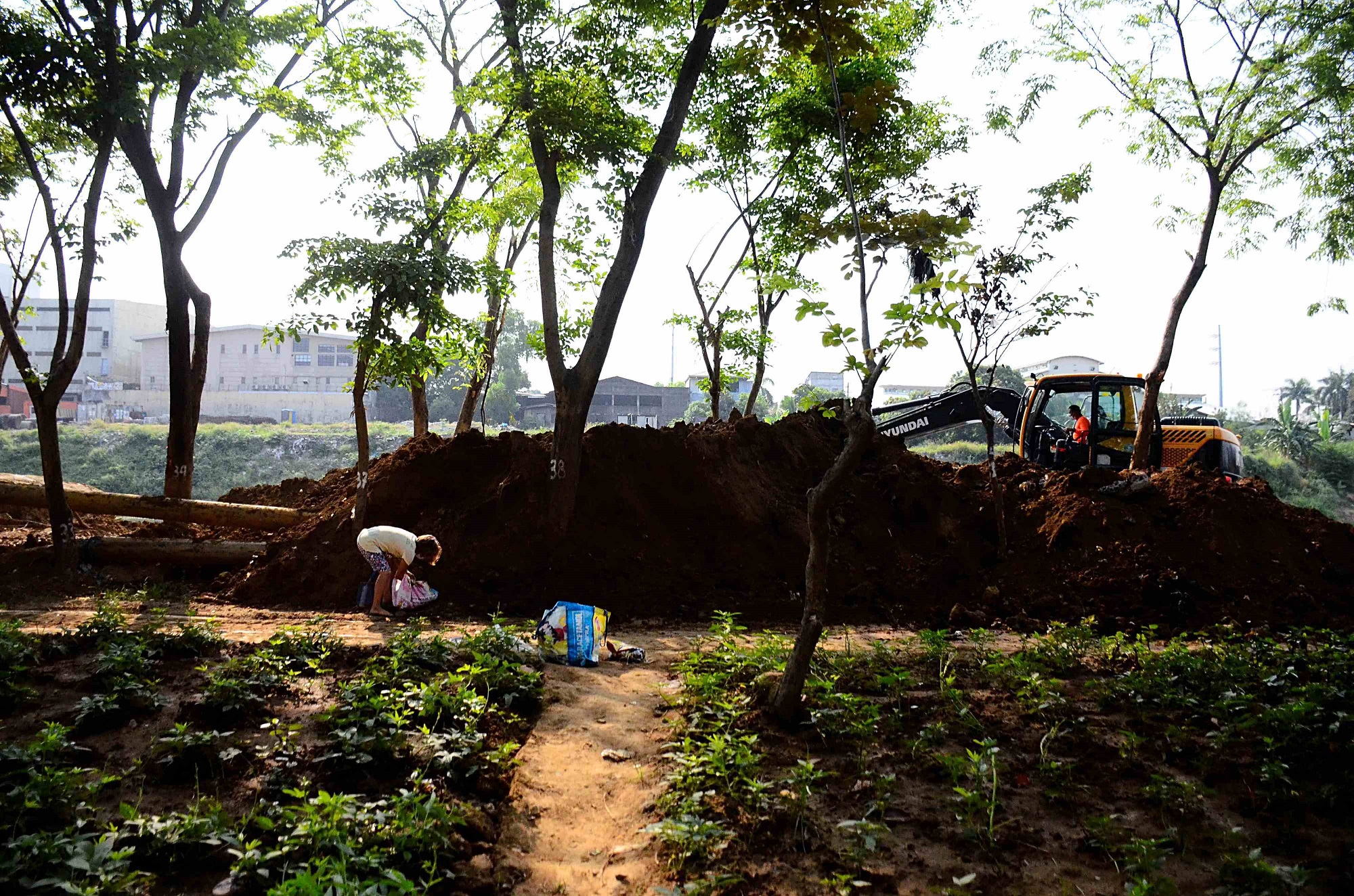 A backhoe begins dredging a portion of the Marikina River, cutting into the river bank where the vegetable plots of the Olandes residents are located. ‘Noon pong nag-lockdown, ang daming nawalan ng trabaho at nagutom. Sa garden po kami kumuha ng pagkain para makaraos araw-araw (During the lockdown, many people lost their jobs and went hungry. We got food from the garden to get by),’ Lita Malundras, an Olandes resident, said. 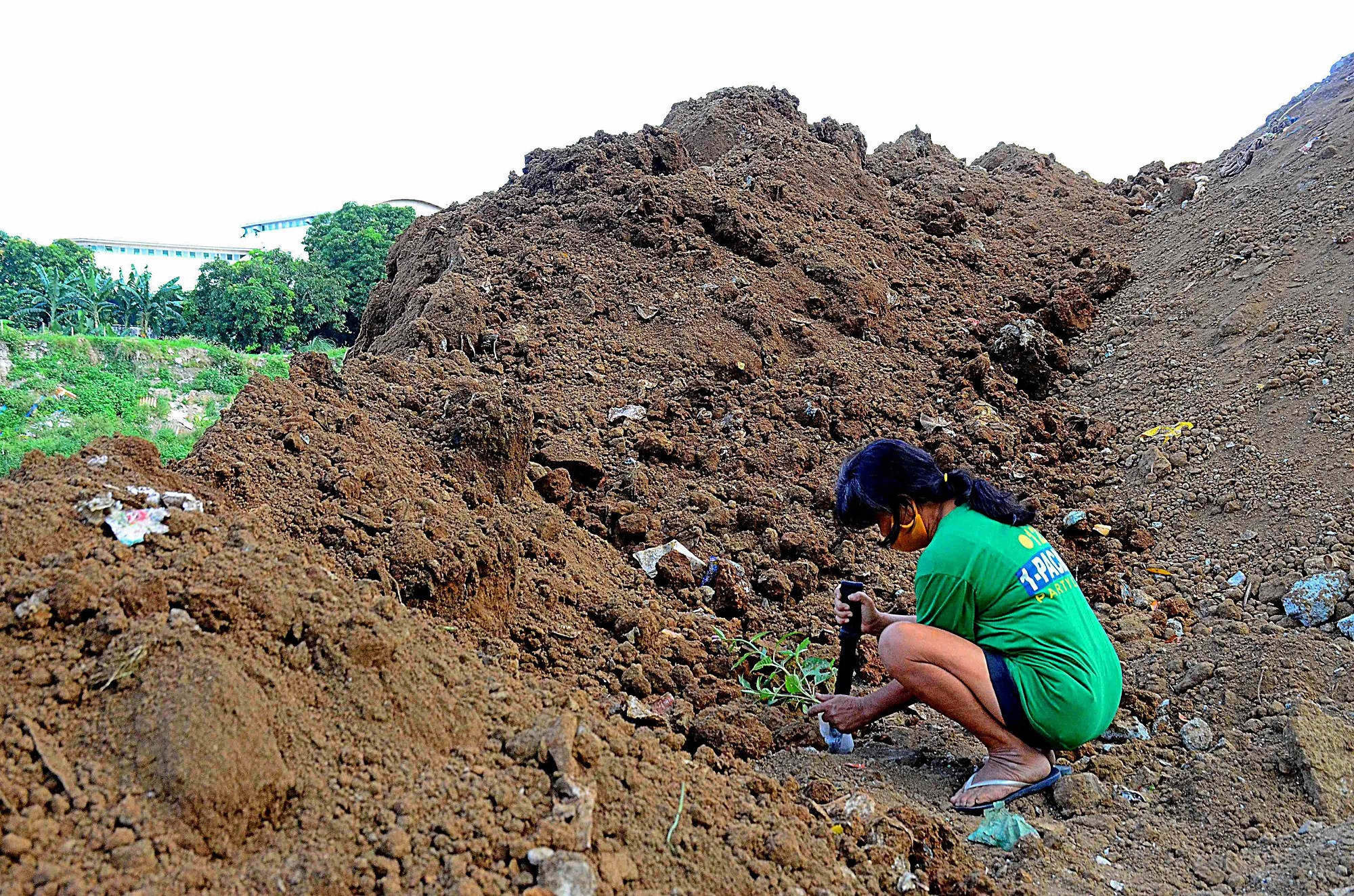 A woman tries to salvage what is left of her planted vegetables a few days after the dredging operations began. She wants to try to grow a crop using plastic bottles for pots, but wonders where to put them as her home is tiny and cramped and does not have space for planting or hanging pots. 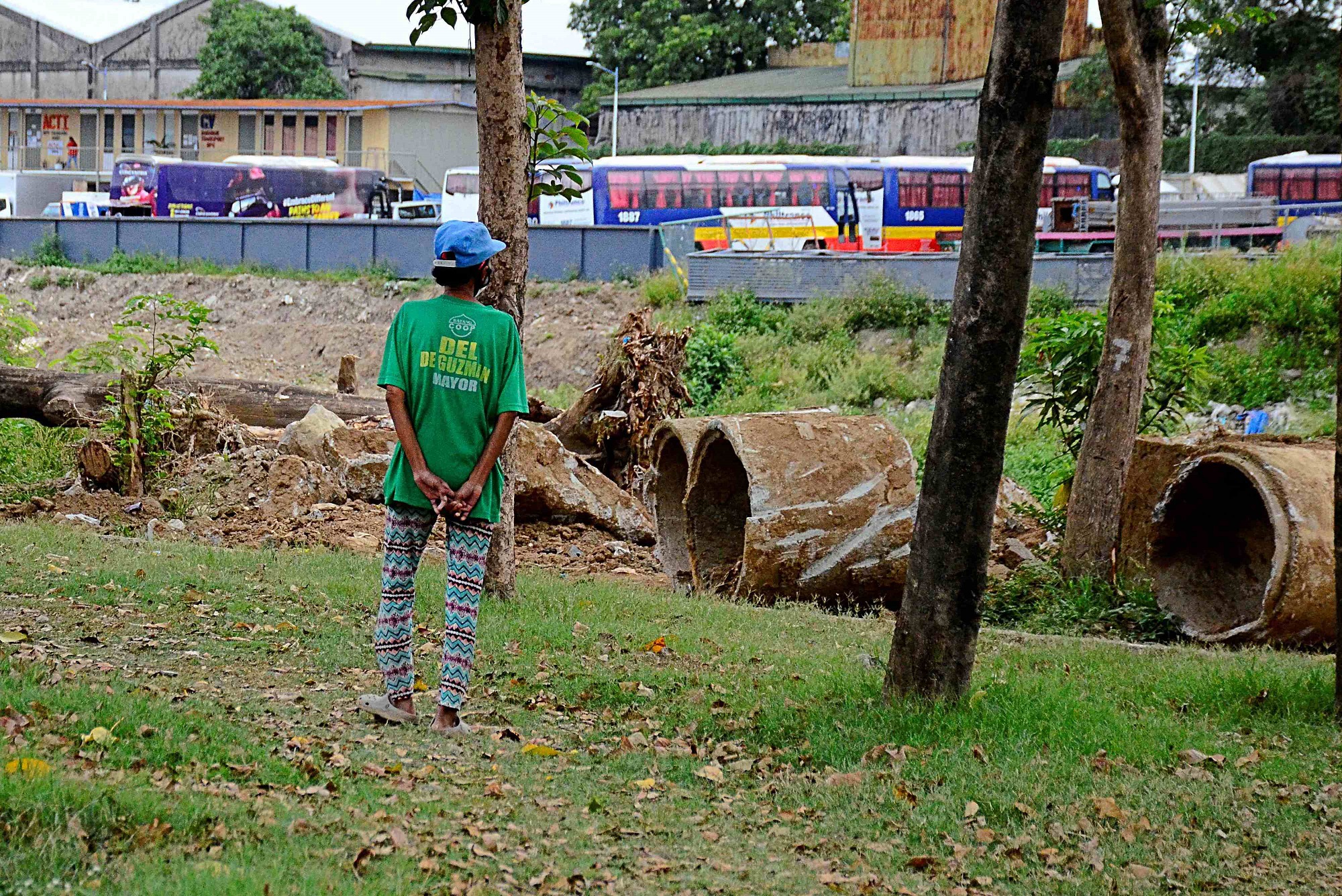 Lisa Villasor, 66, wanders aimlessly on the riverbank, often lingering at the site where her decades-old vegetable patch once stood. Her modest harvest used to feed her family and add to their daily income. 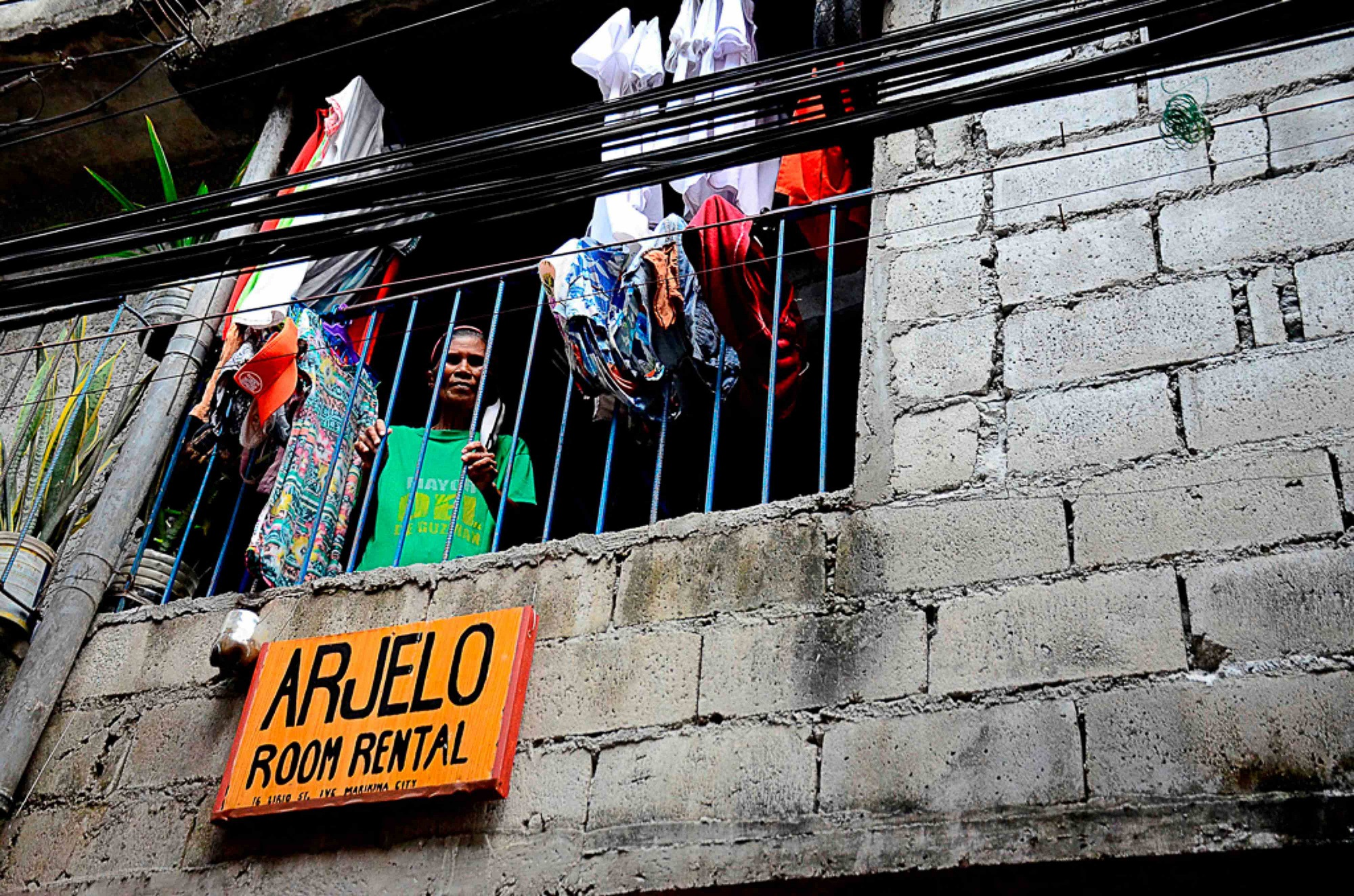 Home to Lisa is a tiny rented room measuring 6 by 10, feet which she shares with her husband and two of their three children. 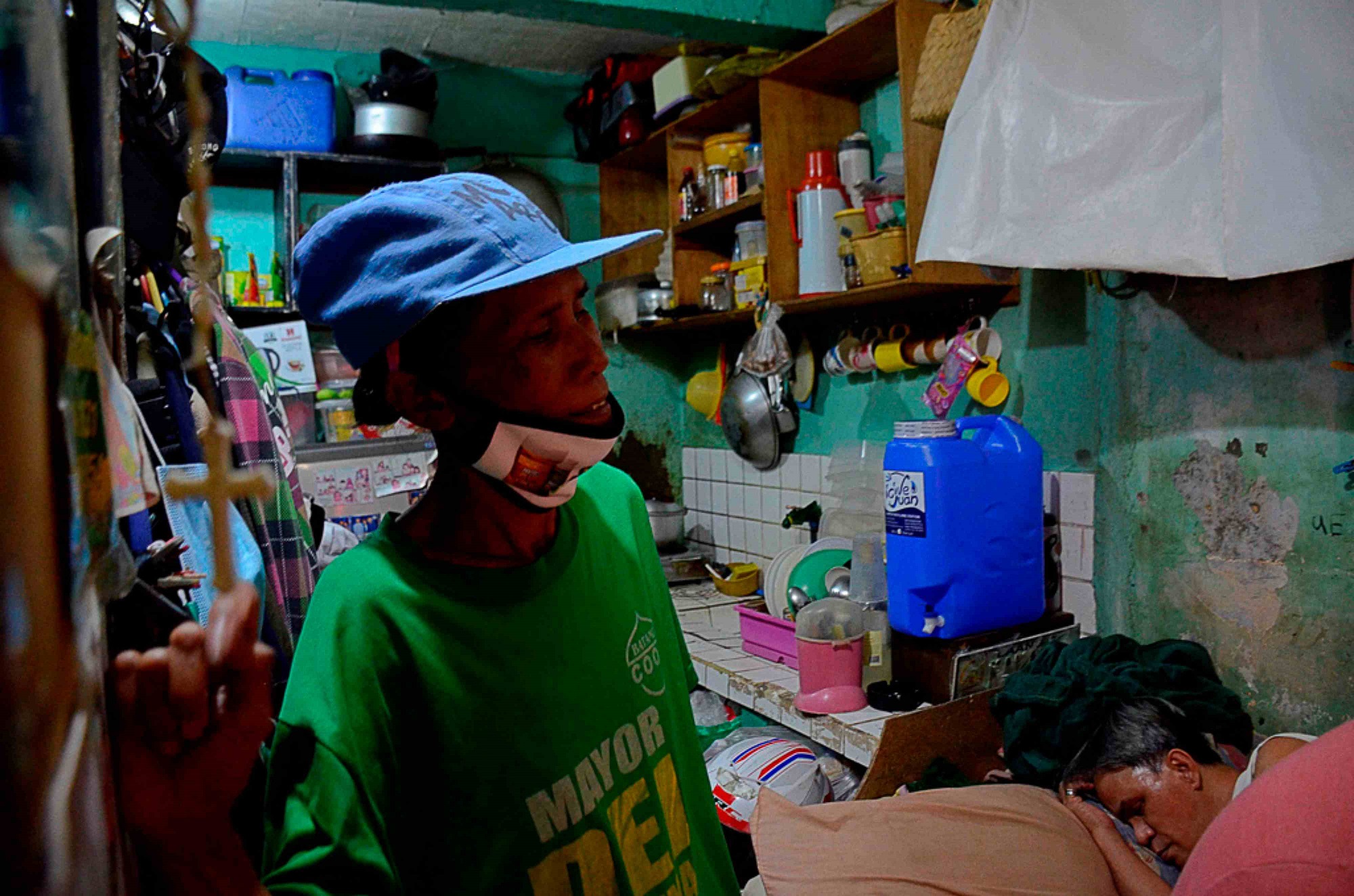 Lisa's husband earns a small salary and now that the few pesos that she earned from selling vegetables from her plot is gone, the family has no choice but to live on less than P100 a day. 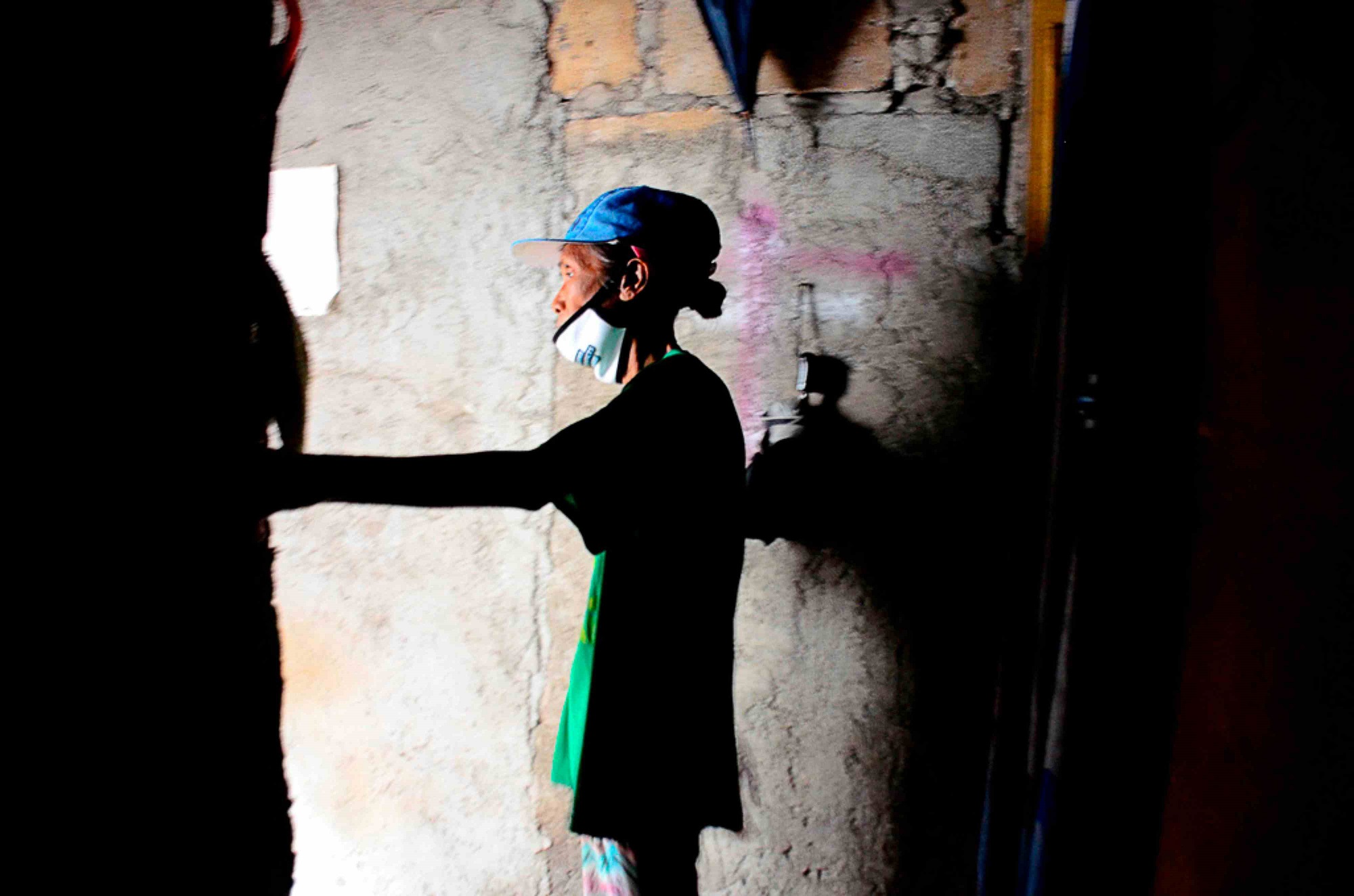 The destruction of her vegetable plot has caused Lisa to fall into depression, and her younger son says that he often finds her staring into space. While the local government has offered aid, Lisa thinks this will not really last them long and they will go hungry again. 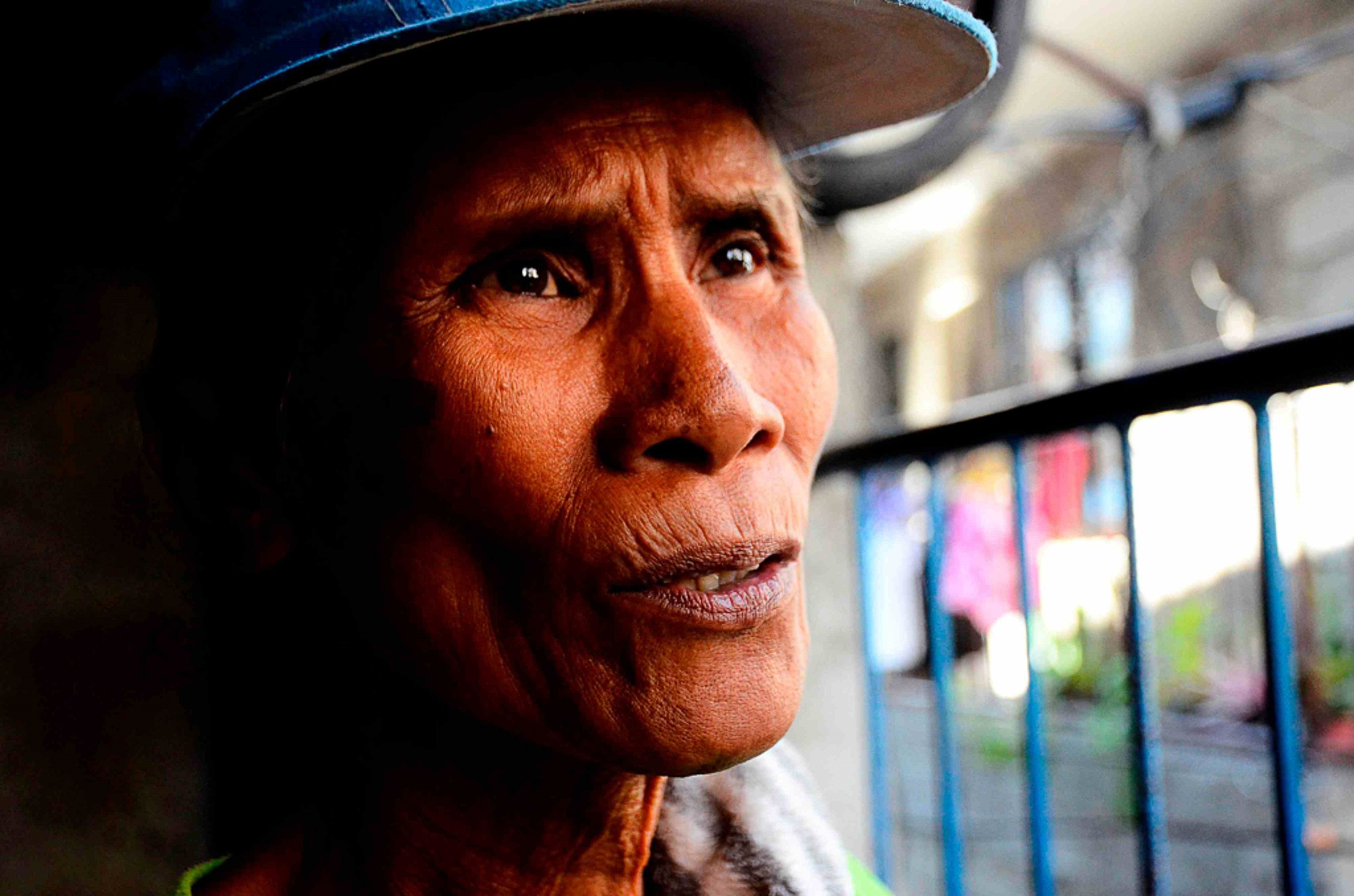 Growing vegetables made her feel useful to her family, Lisa says. Her dismay at the loss of her vegetable plot has made her pessimistic about the future. ‘Inalagaan mo ng ilan taon, tapos kukunin din,’ she whispers in a low voice. ‘Gutom ang kakambal namin ngayon.’ (They’ll take the land from you even if you tended it for years. Now we’ll have to live with hunger.)