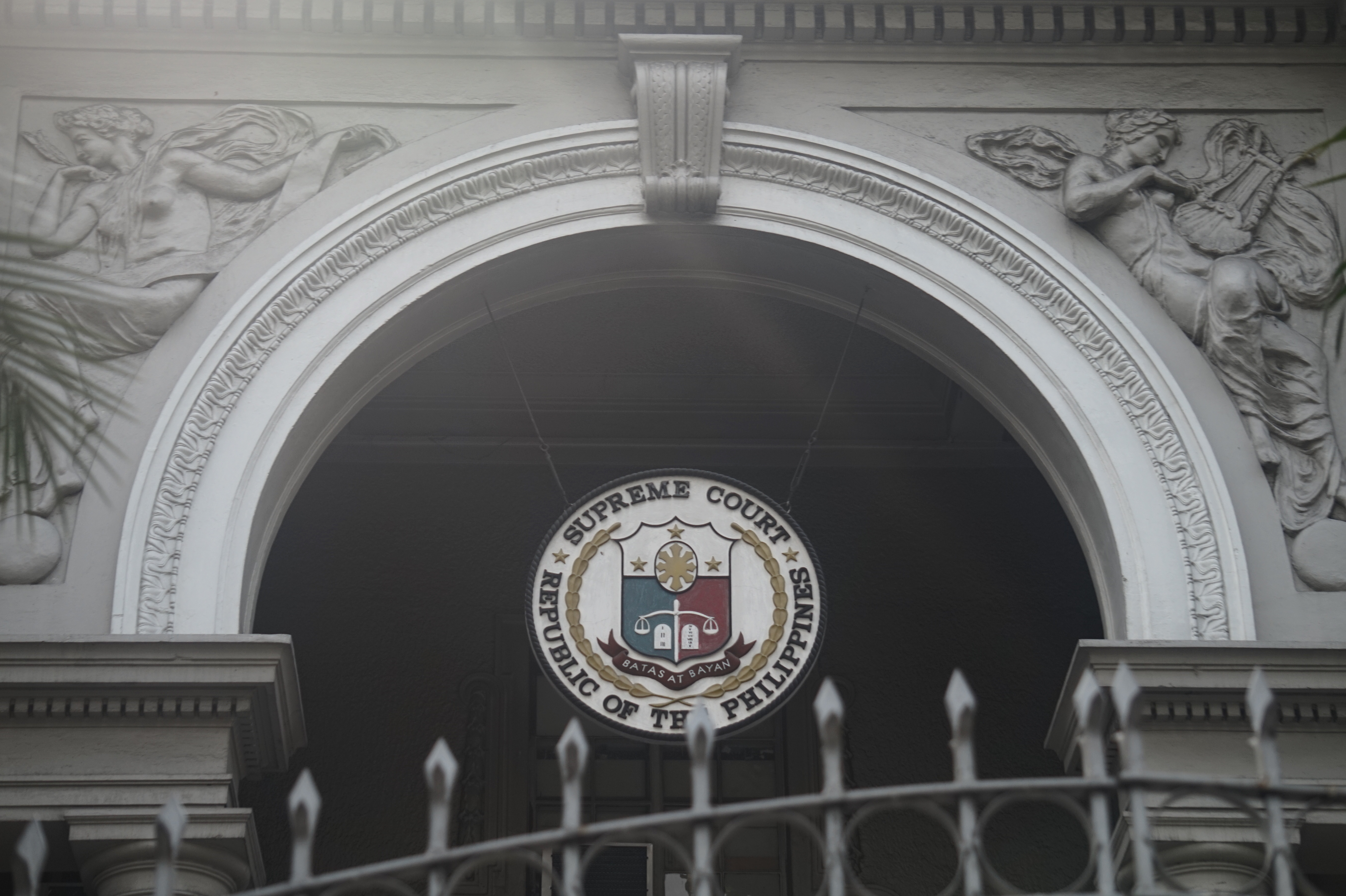 President Rodrigo Duterte has appointed Alexander Gesmundo as the new chief justice, breaking a pledge he made early in his administration that he would respect seniority in his appointments to the Supreme Court.

Duterte bypassed Senior Associate Justice Estela Perlas-Bernabe, who was appointed to the high court in September 2011 and is set to retire in May 2022. Two other justices more senior than Gesmundo – Marvic Leonen and Alfredo Benjamin Caguioa – did not apply for the post.

First appointed to the high court in August 2017, Gesmundo is expected to serve as chief justice for over five years or until November 2026. He replaced Diosdado Peralta who opted to step down one year earlier than his mandatory retirement in March 2022.

Gesmundo is Duterte’s most senior appointee among sitting justices in the High Court, plucked from the Sandiganbayan anti-graft court, where he had served since 2005.

His voting record in the Supreme Court shows he has consistently voted in favor of the president’s interests. He was the ponente or writer of the decision junking a petition against the constitutionality of the Bayanihan to Heal as One Act, which gave Duterte expanded powers to respond to the coronavirus pandemic.

He concurred in decisions allowing the extension of martial law in Mindanao, dismissing a petition for the disclosure of Duterte’s health condition, declaring Senator Leila de Lima’s arrest as valid, and junking a petition to declare the 2018 temporary closure of Boracay Island as unconstitutional.

He also concurred in the ouster of former chief justice Maria Lourdes Sereno by way of an unprecedented quo warranto ruling, in which the chief magistrate's appointment was deemed void over her failure to file a complete set of Statement of Assets, Liabilities, and Net Worth (SALNs).

Sereno’s removal allowed Duterte to appoint four chief justices before he steps down in 2022. Sereno was supposed to serve until 2030. 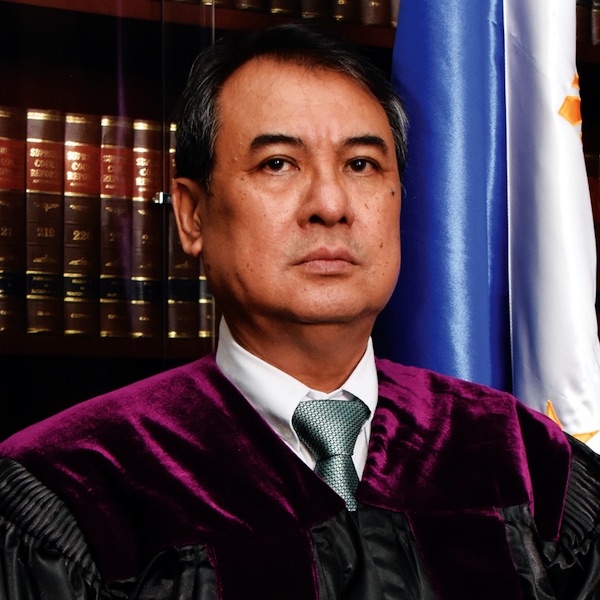 NEW CHIEF. Alexander Gesmundo is the fourth chief justice under the Duterte administration. Photo from the Supreme Court website.

Gesmundo was asked during his public interview on March 12 by the Judicial and Bar Council (JBC) about the perception that Supreme Court justices were "just followers of the present administration." The JBC is the constitutional body that vets nonimees to the judiciary.

Q: How will you address the public’s perception that members of the high court are just followers of the present administration as had been the impression under the previous administrations?

Gesmundo: That is a public perception, your honor, but you can [address] that perception by showing that the courts decide [based] on what is proper under the circumstances. People may have different perceptions but what mattered is that the court is doing its job properly. I think that is the more important thing to consider.

Gesmundo was described by court observers as “very collegial” and “respectful of his colleagues” – characteristics that will help him lead the 15-member Supreme Court.

His biggest strengths are his administrative skills and his dedication to instituting reforms to address the judiciary’s biggest headache – addressing the backlog of cases.

He was grilled extensively on administrative matters during his public interview, where he impressed many court observers with his vision to address the judiciary’s challenges. Peralta sought his commitment to pursue reforms they had started in the committee on revision of rules, where they looked at solutions to "unburden" the courts.

They discussed "filtering mechanisms" for cases that reach the court such as adjusting the threshold amount for small claims, elevating requirements for cases from probable cause to prima facie evidence, and imposing sanctions to discourage "frivolous cases."

Gesmundo spoke of fast-tracking the digitization of the judiciary and improving public access to justice. He also batted for more transparency, supporting the release of the justices' SALNs.

Killings and the anti-terrorism law

Gesmundo assumed leadership of the Supreme Court as it faces pressure to act decisively on the rampant killings and attacks against members of the legal profession and on criticisms that some courts have become “search warrant factories,” which were blamed for the March 7 “Bloody Sunday” police and military operations that killed activists in Southern Luzon.

The High Court is also set to finish oral arguments and decide on the constitutionality of the widely criticized Anti-Terrorism Act of 2020.

The law was the subject of 37 petitions before the high court, filed by various groups and individuals from different segments of society, who raised concerns against provisions that they said would trample upon fundamental freedoms and curtail dissent.

Gesmundo was asked about these pressing issues during his public interview.

Gesmundo said the most that the high court could do about killings and attacks against members of the legal profession was to “immediately talk with law enforcement authorities and perhaps require [them] to give specifics on the extent of the investigations conducted as regards the killings.”

He also pushed for a dialogue with the Integrated Bar of the Philippines to discuss “how we can possibly address these issues of killings of lawyers and even judicial officers,” he said.

The Supreme Court later issued a rare statement condemning killings of lawyers. The statement followed a call to action by the Free Legal Assistance Group, which noted that 61 lawyers were killed under the Duterte administration.

On criticisms against the judges who issued search and arrest warrants against activists who were killed in police operations, Gesmundo reminded judges that they could not totally rely on the affidavits submitted by complainants and their witnesses in deciding whether or not to issue warrants.

“The rules are clear. The judge must conduct a personal searching inquiry and therefore if he decides to issue a search warrant, his primary basis should be his own determination [of probable cause], based on his examination of the application as well as his witnesses,” Gesmundo said.

Gesmundo posed “no objections” to releasing his SALNs as long as the request was “legitimate.”

“Personally, I would have no objection. But at the moment there is an existing administrative issuance of the court regarding the release of SALN,” Gesmundo told the JBC.

The Supreme Court has been criticized for requiring people who ask for the SALNs of the members of the judiciary, including judges, to justify to the en banc or full court the basis of their requests. Republic Act No. 6713 provides for the public’s “right to know” about officials' “assets, liabilities, net worth and financial and business interests including those of their spouses and of unmarried children under 18 years of age living in their households.”

“Transparency is the rule.... I don’t think there should be any objection on that aspect. They can possibly get the entire copy of the SALN… [if the purpose is] legitimate." Gesmundo said.

Gesmundo said  justices of the Supreme Court are facing certain risks in the performance of their duty, but he was open to releasing the entire copy of his SALN if the “intention of getting details of the SALN is laudable and legitimate.”

He finished BS Economics at the Lyceum of the Philippines and earned his law degree from the Ateneo Law School in 1984. He passed the bar the following year. He started his career in government in 1985 as trial attorney at the Office of Solicitor General, where he would rise to become Assistant Solicitor General.

He had varied jobs prior to government service. He worked as research analyst, publisher, and marketing officer.