IN A move that bewildered political analysts, 66 party-list groups went the way of mainstream political organizations during the three-month campaign period for the recently concluded polls and placed tri-media ads worth a total of P597.54 million, based on data from the media monitoring agency Nielsen.

IN A move that bewildered political analysts, 66 party-list groups went the way of mainstream political organizations during the three-month campaign period for the recently concluded polls and placed tri-media ads worth a total of P597.54 million, based on data from the media monitoring agency Nielsen.

But some big ad spenders among the party-list groups may be in for a very rude surprise themselves.

As it is, the 90.22-percent partial unofficial election returns tally of GMANews.TV reveals that at least 10 party-list groups that had a combined P187.77-million worth of TV airtime are unlikely to land seats in Congress.

Yet the same data indicate that 27 of the 43 party-list groups that have high chances of securing at least one seat in the House of Representatives did not even spend a single centavo for a TV ad.

Of all the ads credited to party-list groups, those on TV accounted for 89 percent with P534.57 million. Radio ads made up 10 percent, with P57.31 million, and print ads one percent, with P5.67 million. These sums already reflect the 30-, 20-, and 10-percent discounts broadcast and media entities are legally required to apply for TV, radio and print, respectively. (See Table 1)

Analysts point out that as representatives of marginalized sectors of society, party-list organizations are not expected to incur much campaign expenses since they are assumed to have small budgets – if at all.

Too, they are expected to pull in their resources and effort on the ground, where their constituencies are.

“The very essence of a party-list group is that it has a recognized constituency already,” says campaign analyst Ronald Jabal. “Kilala ka na ng sector (The sector already knows you). Constituency is already built.”

“Normally, a party-list group would have already identified its baluartes, or the areas that will deliver the votes,” political analyst Ramon Casiple also says. This is why, he says, a “genuine” and not “peke” party-list group would find it fairly easy to get the minimum required percentage of total votes for it to have a seat in Congress.

Analysts, though, concede that some party-list groups were pushed to placing numerous ads this time around in a bid to stand out from the other 186 party-list names listed in the ballot.

Jabal also says that some groups may have been aiming to get more than one seat and therefore thought they would have a better chance to do this with ads.

Party-list groups are allowed to get the maximum of three seats in Congress proportional to the percentage of votes that they will get.

But as even mainstream political parties have found out, ads can only do so much. PR professional Jones Campos points this out as well, adding, “(Ads) can create awareness, but you have to know your target market.”

To identify the party-list groups that are likely to win, PCIJ sought help from Ateneo de Manila University mathematics professor Dr. Felix Muga II, who is doing a running computation of the partial and unofficial results of the party-list polls.

Muga applied the so-called “Carpio formula” in which party-list groups that garner a minimum of two percent of the total valid votes cast for the party-list elections are qualified to have a seat in Congress. Parties with less than two percent of the votes may also receive a slot if there is a second round of seat allocation. 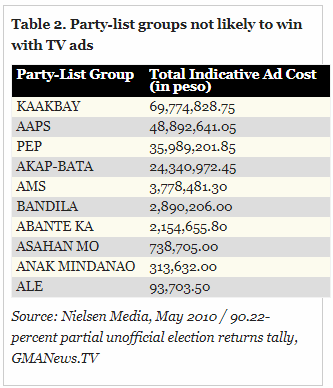 The combined P187.77 million worth of TV ads of these groups represents 31 percent of the total ad expenditure of party-list organizations. Reelectionist AMIN is the only veteran in the group; the rest are new contenders in the party-list elections.

Ads apparently failed to raise awareness about these newcomers, as well as their respective advocacies. Four – Kaakbay, AAPS, Akap-Bata, and PEP — even spent tens of millions of pesos each for TV ads, to no avail.

Casiple offers that paid ads might not be that effective in capturing the market vote because it will be like competing in a costly air war where presidential and other national candidates already dominate. 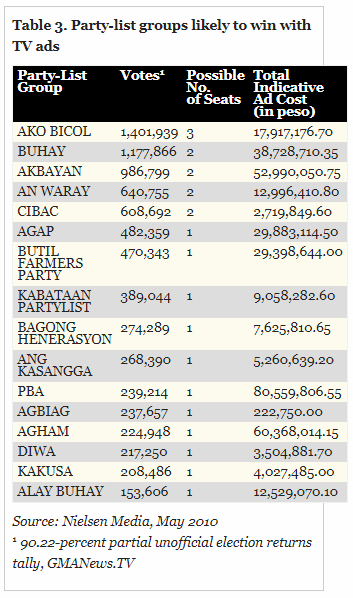 Yet at least 16 party-list organizations proved luckier with their TV ads and now look headed for Congress.

Their tri-media ad expenditure amounts to P367.79 million or 62 percent of the total ad spend of all party-list groups. But the bulk of the ad total of these went to TV commercials, which reached P346.81 million in value.

Newcomer Ako Bicol is even the top vote-getter with 1,401,939 votes and is very likely to get the maximum number of three seats in Congress.

Claiming to advocate progress and development in the Bicol region, Ako Bicol incurred a total of P17.92 million in political ads. Ninety percent of that amount or about P16.14 million went to airing TV ads while P1.78 million was used to buy spots in various radio stations.

Reelectionist Buhay of El Shaddai leader Brother Mike Velarde is at No. 3 with 1,177,866 votes and has chances of getting at least two seats. The group spent P38.73 million in ads, all of them for TV.

Akbayan, another reelectionist, is next with 986,799 votes, with the possibility of getting two seats as well. The party spent P52.99 million on ads.

But the rest of the 43 party-list groups that might win either spent relatively smaller amounts on ads or none at all. Among these is reelectionist Coalition of Associations of Senior Citizens in the Philippines, which is currently second in terms of the number of votes (1,192,875).

Led by incumbent Representative and lawyer Godofredo V. Arquiza, Senior Citizens is very likely to get the three seats even with just P73,299.60 worth of ads. Nielsen data show that these ads were even in print, and came to a grand total of 17 in all.

Groups that may find two seats reserved for them include Gabriela, Cooperative NATCCO Network Party (Coop-NATCCO), Bayan Muna, 1st Consumers Alliance for Rural Energy (1-CARE), and Abono. None of the five aired any TV ad during the campaign period as well.

Party-list 1-UTAK, Aangat Tayo, ABC, Alagad, ALIF, Ang Galing Pinoy, AVE, A TEACHER and YACAP did not spend for any ad at all.

Campaign analyst Jabal says that the success of these groups despite their relatively modest (and sometimes nearly nonexistent) expenditures shows how effective their campaign on the ground was carried out.

Then again, majority or 16 of the 27 groups that did not air TV ads hold current positions in Congress. Incumbents may feel they have less need for ads since they are already established in their respective sectors and have gathered supporters over their years in public office.

PR man Campos also comments, “Naturally, incumbent groups would win because they have the base already. Party-list elections are mass-based and primarily dependent on supporters.”

Jabal himself says that incumbents gain advantage by way of its pork barrel allocation. This allows some “patron politics” to take place, which Jabal refers to as the “anathema of party-list groups.”

“They have little more to spend around,” he says, noting that when election time comes, some voters will vote for a particular candidate because they “received help” from him or her.

As for the 11 newcomers, Campos says, “They have probably been preparing ever since, finding out where they can get the votes they need.”

He also says that the two-percent rule serves as a helpful guide for party-list candidates.

“More or less, groups would have an indication of their chances prior to elections because they would know their numbers,” explains Campos. “So maghahabol ‘yan para makarami pa ng boto (They would thus work on their strategies to get the rest of the numbers they need).”

At least three bills setting standards to protect the country’s natural resources and attain sustainable development are stuck in the Senate committee on environment, natural resources, and climate change. The measures are likely dead in the 18th Congress.

The Makabayan bloc warns that the government’s campaign against dissent won’t stop at members of the progressive coalition.

When ads work and don’t

PR EXPERT Jonas Campos observes that one reason that political ads failed to work for some party-list groups is because they used the wrong “channel.” Campos is not trying to spark yet another network war. Rather, he is referring to party-list group ads that did not carry the organization’s message or advocacy and instead showed the faces of mainstream politicians or carried a major party’s slogan.

THEY are avowed representatives of the poor and the marginalized, but in the May 10, 2010 elections, 12 party-list groups allied with two candidates for president, one for vice president, and one for senator splurged a staggering P426.16 million on television ads that aired in the last two weeks of the campaign period.

THE HORRIBLY costly air war for the presidency has in recent weeks ceased being the exclusive domain of moneyed politicians and political parties. The new players and big buyers of political advertisements on television are seven apparently cash-rich party-list groups accredited by the Commission on Elections as supposed representatives of the “marginalized” and presumably poor sectors of Philippine society.