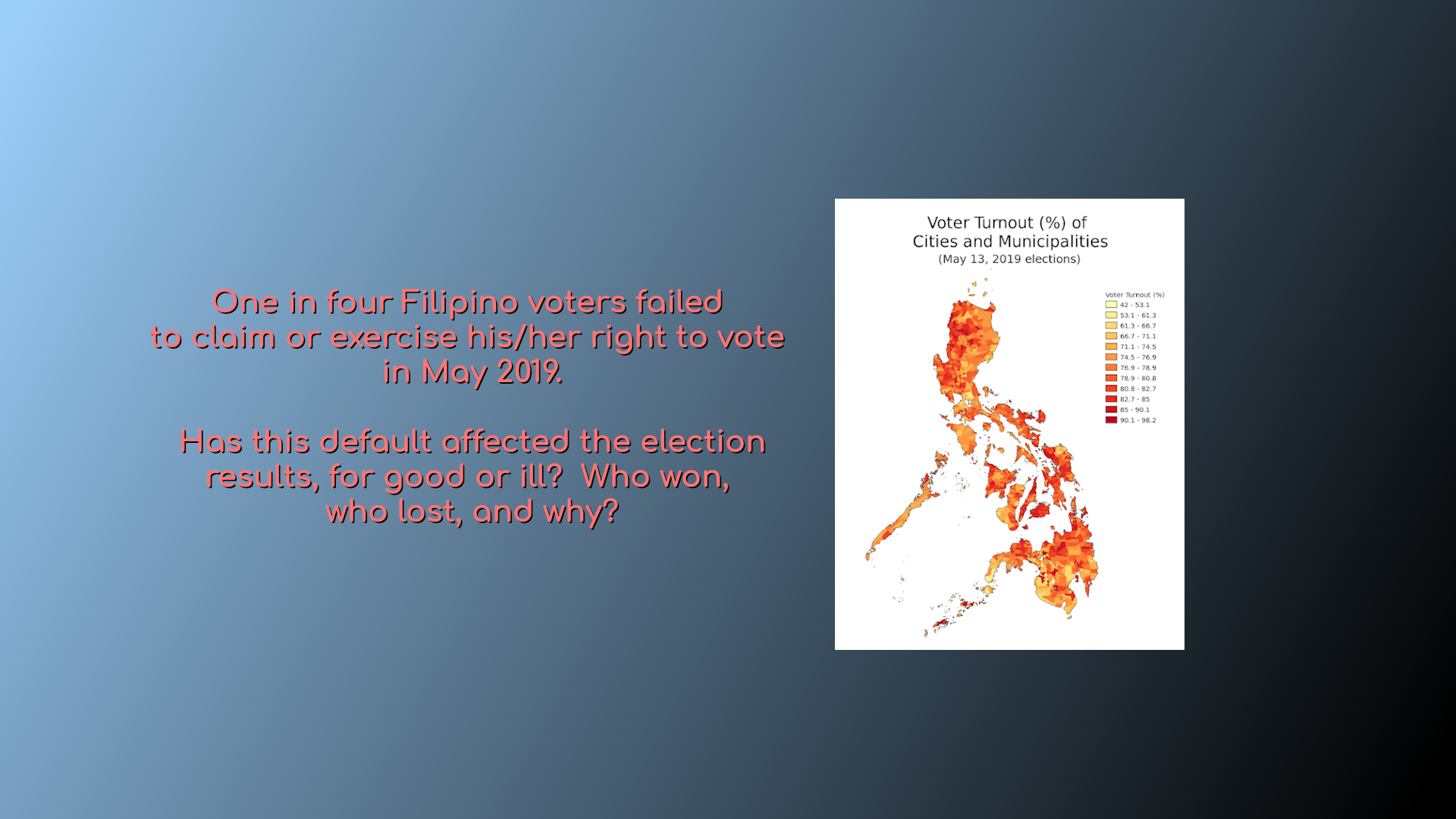 ELECTIONS, like basketball or boxing, are supposedly a favorite sport and pastime of Filipinos.

Yet, unlike basketball and boxing, more than cheers or applause from the bleachers, elections demand more of all voters. Indeed, wrong choices in bad elections will cost voters more than just a game.

Every three years, voters in the Philippines troop to the polls to elect governors, mayors, and legislators, and every six years, a President. But “the worst that could happen,” according to a former US president, would be to have “candidates without platforms, hiring consultants without  principles, for elections without voters.”

Data from the Commission on Elections (Comelec) on voters, voter turnout, and winners in May 2019 and in elections prior suggest that this might be the norm in Philippine-style elections. And it repeats on and on with no clear contrition nor correction from those who vote, and those who court the vote. 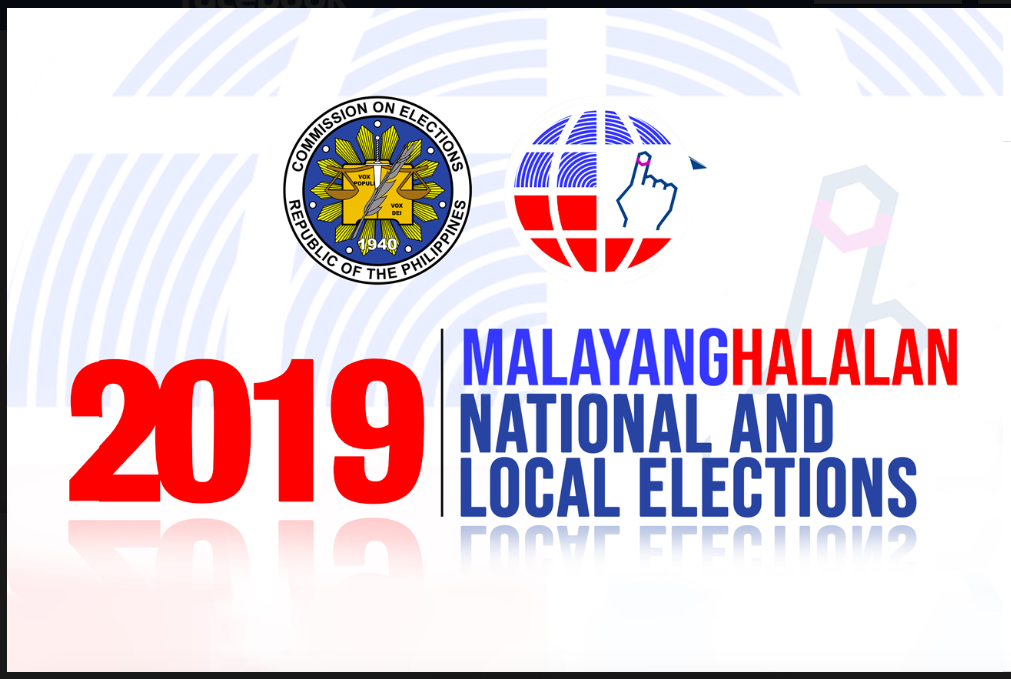 The Comelec had  pegged the national voter turnout at 75.9 percent. This means, however, that nearly a quarter, or one in every four of all registered voters, failed to claim or exercise their right to suffrage – or to vote and be voted to public office – in May 2019.

How has this default affected the results for good or ill of the last elections? And what better things could have happened, if only more voters were more engaged?

The possibilities may inspire and perhaps help reboot the system of the same, same names and families dominating politics and elections in the country.

If only more voters had voted, could more deserving new entrants have a better fighting chance at leadership?

And yes, if  only more voters had voted, could the candidates secure bigger majorities and fuller mandates, and turn Philippine-style elections into more inclusive, more transparent, and more accountable community projects? 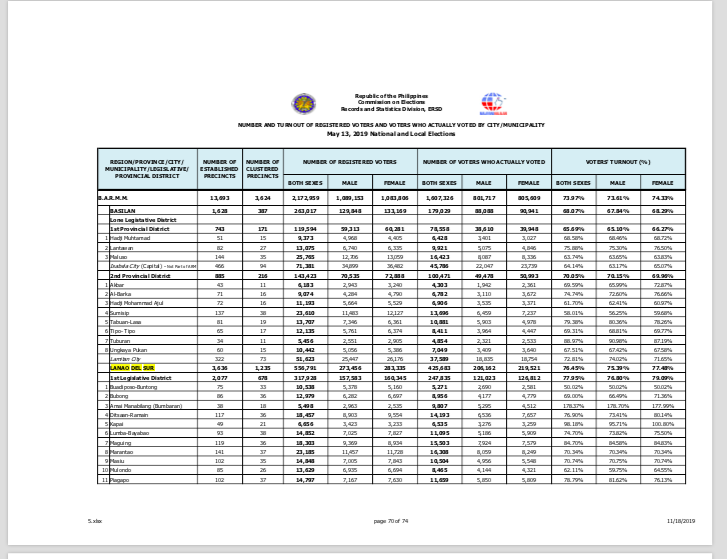 PCIJ’s data analysis of Comelec data and documents on the voters, voter turnout, and winning candidates for governor and mayor in the May 2019 elections points to many disconcerting findings:

Voter turnout rates were far lower or higher than the national average in some areas, and in a few others, seemingly incredible or irregular at nearly 100 to 178 percent. 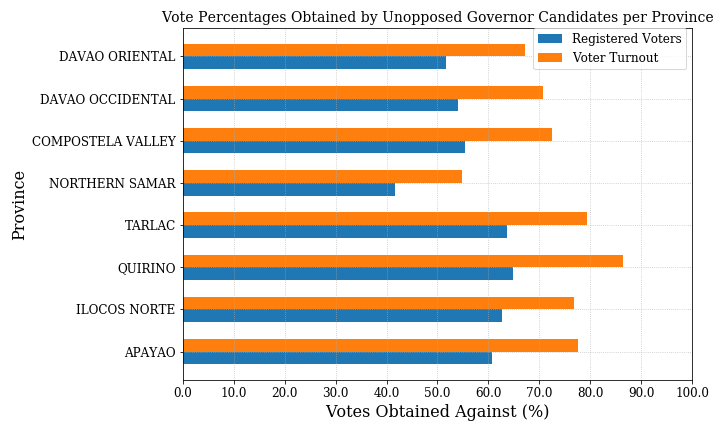 Philippine elections are a captured process by unopposed, or two or three candidates only – mostly from old political families and political parties -- in most towns and cities.

Three in four of the winning candidates for governor and mayor mostly failed to get the absolute majority vote, by voter turnout or by the total registered voters in their respective areas, raising doubts about the fullness and quality of the mandate that they supposedly won in the elections. 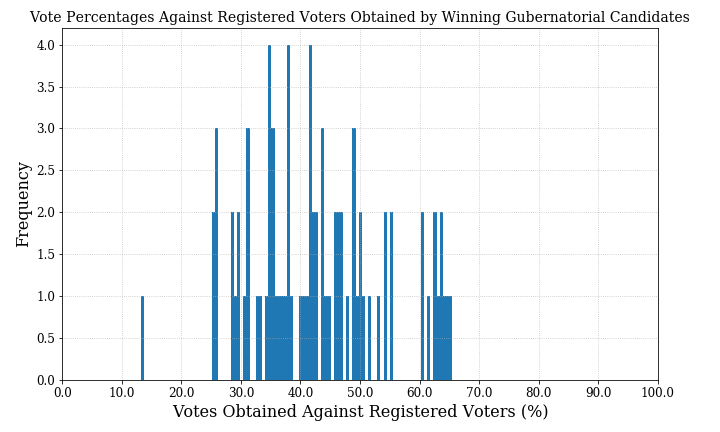 Most of the unopposed candidates for governor were voted into office by only 41.7 to 65 percent of their areas’ registered voters. 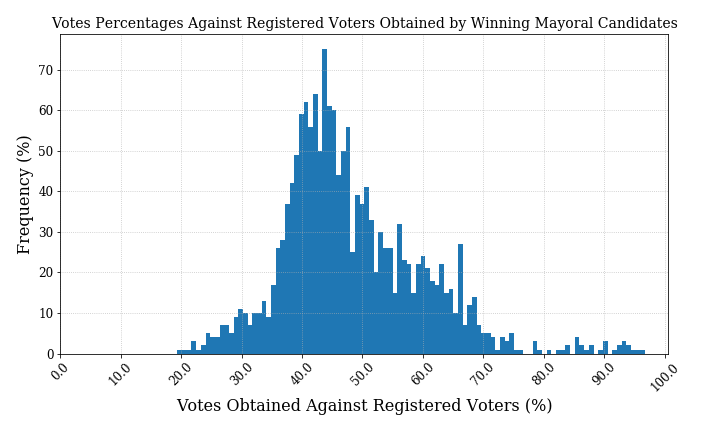 In two other areas, though, Comelec data showed an apparent irregularity with data entries: Two candidates for mayor reportedly obtained votes that far exceeded the total voter turnout or the number of votes actually cast in their areas.

In contrast, only 334 winning candidates for mayor (20.4 percent of total) obtained 50 percent or less of the voter turnout in their respective cities and municipalities. The lowest percentage of votes obtained vs. voter turnout was recorded for the winning mayoralty candidate of Borongan, Eastern Samar at 25.4 percent. 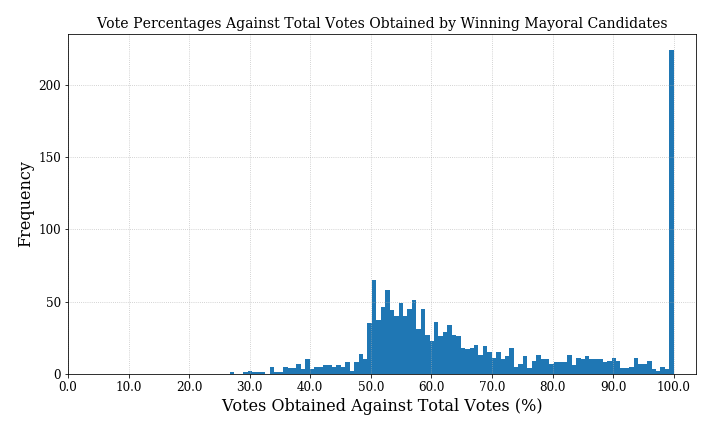 At least 217 of the total 1,634 cities and municipalities in the country had a single or unopposed mayoral candidate. 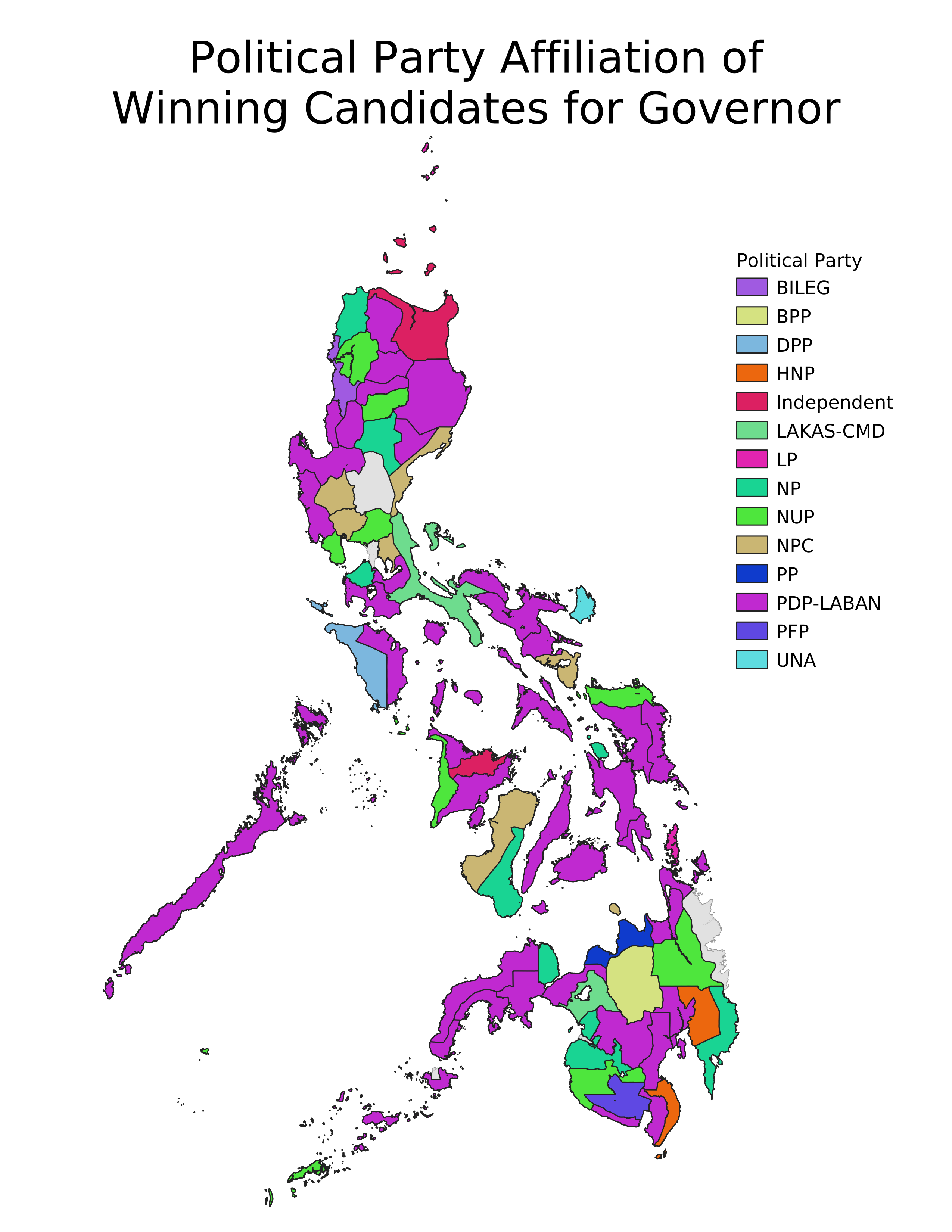 The May 2019 elections established the formidable hold on local power of the Partido Demokratiko Pilipino-Lakas ng Bayan or PDP-Laban party of President Rodrigo R. Duterte. The Nacionalista Party (NP), Nationalist People’s Coalition (NPC), and National Unity Party (NUP) that are also allied with the PDP-Laban also bagged significant numbers of winning candidates for governor and mayor. The opposition Liberal Party and other smaller parties seem to have been shut out or had gone ghosting in May 2019. 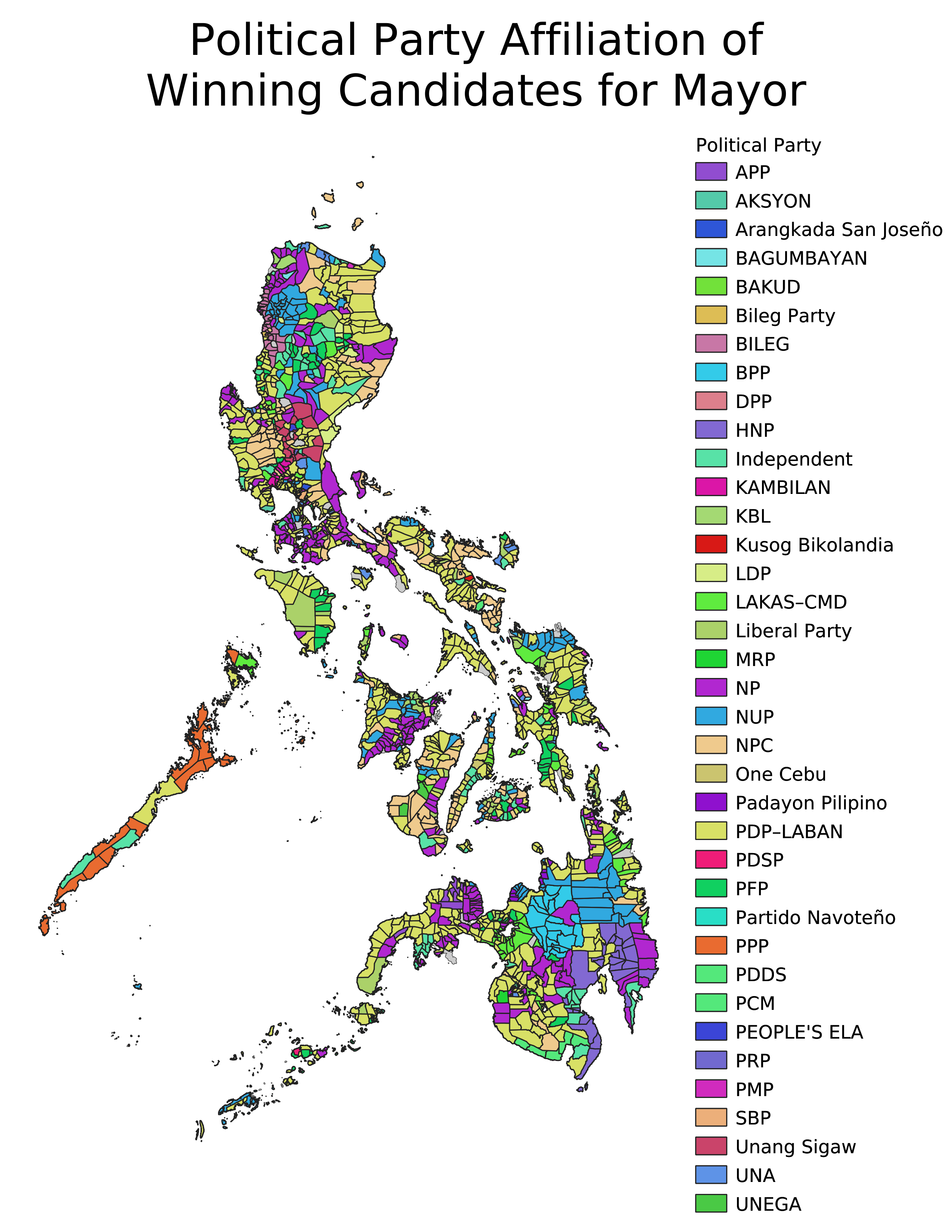 The right to suffrage – to vote and to be voted into public office – is firmly enshrined in Article V of the 1987 Constitution.

Suffrage, says the fundamental law of the land, “may be exercised by all citizens of the Philippines not otherwise disqualified by law, who are at least eighteen years of age, and who shall have resided in the Philippines for at least one year and in the place wherein they propose to vote for at least six months immediately preceding the election.”

This right knows no bounds at all for qualified citizens living and working at home or overseas. “No literacy, property, or other substantive requirement shall be imposed on the exercise of suffrage,” the Constitution states.

The procurement woes of the Comelec in the May 2019 elections had a backstory in an audit report the year prior. It continues to pay monthly rental for warehouse services without a valid contract. It has an overstock of paper clips, bond paper, and spiral notebooks that had been exposed to rain and the elements, and then left to rot and decay.

16M failed to vote for party-list,
missed names on back of ballot

A billion-peso blunder: 6 in 10 machines
to verify voters conked out, not used at all

Avoidable delays in the procurement of goods and services; the election calendar revised four times; wasteful spending on machines that conked out or were not used; massive undervoting for party-list groups. The May 2019 elections: A messy affair, not fault-free at all.

They were supposed to validate the fingerprints and verify the identity of voters. But on poll day itself, the machines malfunctioned in every way possible, leaving election officers and voters shocked, surprised, and exasperated.