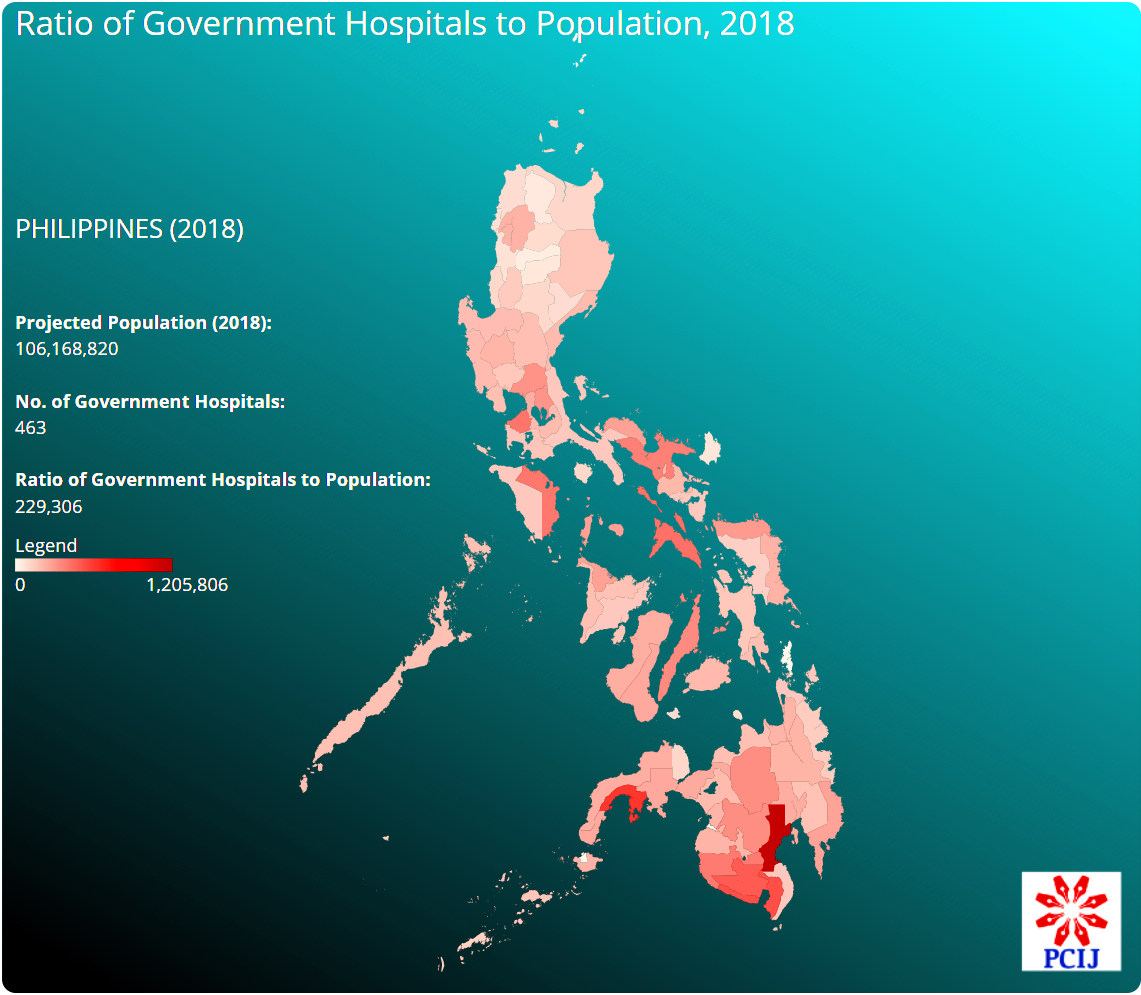 Public Healthcare in the Philippines

By mid-August this year, the government has already recorded about 230,000 cases of dengue, including 958 fatalities, across the nation. By the numbers of doctors and beds in government-owned hospitals, could the Philippines have prepared better to deal with dengue?

A NATIONAL dengue epidemic has been declared last August. In the first six months of this year alone, or from Jan. 1 to July 20, 2019, the Department of Health (DOH) has monitored a total of 146,062 cases and 622 deaths from dengue hemorrhagic fever.

Region VI (Western Visayas) has topped the list of regions by number of dengue cases at 39,892 or 17 percent, followed by Region IV-A (CALABARZON) with 30,889 cases, and Region X (Northern Mindanao) with 17,674 cases.

Even worse, at least 958 patients had died since the start of the year. Region VI (Western Visayas) ranks first in terms of case fatalities with 179 deaths due to dengue, followed by Region IV-A (CALABARZON) with 98 deaths, and Region VII (Central Luzon) with 90 deaths.

In the face of a public-health epidemic that exacts a most tragic toll on lives, should we not ask ourselves now: How prepared are we, or, could we have prepared better, for dengue?

Check out PCIJ's MoneyPolitics Online for all the datasets on the state of the public healthcare system in the Philippines.

Cavite and Cebu, two provinces with high cases of dengue, are also among the highest in terms of government-owned hospitals to population ratio: Cavite ranks sixth, with a ratio of 1: 450,115, while  Cebu ranks 10th, at 1: 377,865.

Filipinos in provinces with smaller ratios of government-owned hospitals to population might be presumed to have better access to public healthcare services.

But this is not the case for Iloilo, the province that has the largest number of dengue cases and deaths this year. Iloilo has a ratio of government-owned hospitals to population that is lower than the national average at 1:164,966. In fact, Iloilo ranks 60th among the 81 provinces in the Philippines with the highest ratio of government-owned hospitals to population.

In truth, responsive healthcare systems are more than just about hospitals.

Other than the facilities, are there enough government physicians in government-run hospitals? How about hospital beds? For citizens who live far away from where hospitals are located, are there any Rural Health Units or Urban Health Centers in the town or city?

PCIJ prepared a visual narrative of the current state of public healthcare services in the Philippines.

Check out other indicators by selecting these from the dropdown list above the choropleth map on PCIJ's MoneyPolitics Online.

Government hospitals singly and together are not at all capable to support the ideal hospital bed to population ratio.

As of 2018, the ratio of government-owned hospital beds to population stands at 1:2,320. This is many numbers away from the hospital bed to population ratio that the Philippine Health Facility Development Plan 2017-2022 of the Department of Health (DOH)has set as target -- one hospital bed for every 800 citizens or 1:800.

Of the country’s 81 provinces, the top five with the highest ratio of government hospital beds to population are all in Mindanao.

There are only two government-owned hospitals -- one in Lamitan City and another in Isabela City – in Basilan. Their combined hospital beds come up to only 50, quite a puny number for a population of more than half a million.

The better ratios are to be found in Luzon island, though.  Three of the five provinces with the lowest ratio of government hospital beds to population are in Luzon: Batanes has the lowest ratio at 1:235; Mountain Province comes in second at 1:688; and Apayao fourth at 1:984. Camiguin, a province in Mindanao, ranks third at 1:912, while Siquijor, a province in the Visayas, ranks fifth.

Almost every city and municipality in the Philippines has at least one Rural Health Unit (RHU) or Urban Health Center (UHC).

According to the 2017 National Demographic and Health Survey of the Philippine Statistics Authority (PSA), these RHUs and UHCs are the second most-utilized public health facilities, next to Barangay Health Stations, in the country.

RHUs and UHCs provide primary care services like health advice and immediate treatment for residents. These facilities are not capable, however, of providing hospital services for more serious medical cases.

Only 12 of the country’s 81 provinces have met the DOH target: seven are in Luzon (Batanes, Abra, Mountain Province, Kalinga, Romblon, Apayao, and Ifugao); two in the Visayas (Siquijor and Eastern Samar); and three are in Mindanao (Dinagat Islands, Camiguin, and Surigao del Norte).

Of the physicians employed with RHUs and UHCs, 3,204 were directly hired by Local Government Units, and 456 were deployed by the Department of Health.

About two-thirds or 9,277 of government physicians are working or have been deployed in Luzon (65 percent), including 4,552 (32 percent) in Metro Manila alone.

Of the Philippines’ 81 provinces in the country, five with the lowest ratio of government physicians to population – or with more doctors serving numbers of citizens --  are in Luzon: Batanes has the lowest government physicians to population ratio, at 1:1,355; Apayao ranks second at 1:2,460; Mountain Province third at 1:2,962; Benguet fourth at 1:3,469; and Ilocos Norte fifth at 1:3,511.

Metro Manila also has one of the lowest ratios of government physician to population, at 1:2,962.

— PCIJ, September 2019
Posted in:
In This Series
Latest Stories