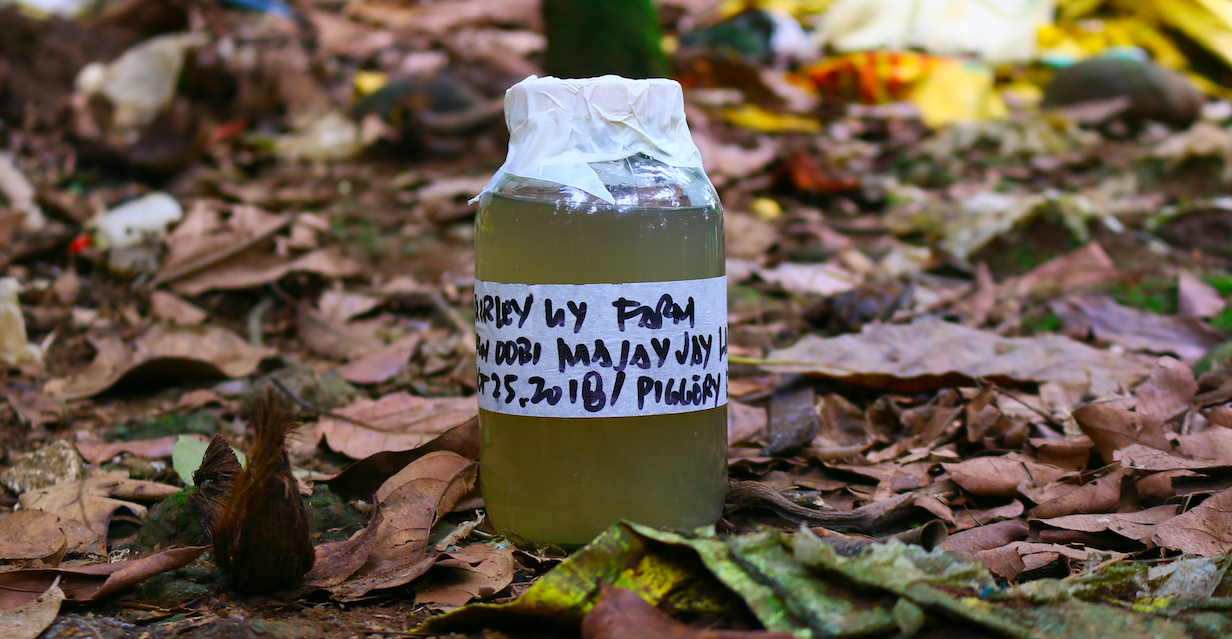 IN APRIL 2018, the Sangguniang Bayan of the small town of Majayjay in Laguna took action against indiscriminate dumping of waste into its rivers. This formed part of its moves to help agencies comply with the Supreme Court’s order in 2008 to continue cleaning up Manila Bay and restoring its waters to Class SB level, or those used for public bathing and swimming or fish spawning.

After all, human and hog waste released into practically all of Majayjay’s water bodies find their way into Manila Bay, although in dissolved and diluted forms, depending on weather and water conditions.

Save for Maimpis River, the Olla, Oobi, and Botocan rivers and the Initian Creek are all linked to Balanac River, which flows into Pagsanjan-Lumban River, which in turn is connected to Laguna de Bay. The Philippines' largest freshwater lake meanwhile flows out into the Pasig River, one of the tributaries of Manila Bay.

Recognizing that the town’s waste goes downstream and further contaminates Manila Bay, Majayjay’s municipal council approved an ordinance requiring households and businesses to install septic tanks in their homes and establishments, including piggeries. Designed to receive wastewater from drains and pipes, these watertight receptacles are also intended to collect, digest, and break down organic matter into sediments. These sediments — also known as septic sludge — are then expected to undergo treatment and disposal every five years, Majayjay's Municipal Ordinance No. 003-2018 said.

A year earlier, the Laguna Lake Development Authority (LLDA) had also adopted the Department of Environment and Natural Resources (DENR)’s Order 08-2016, and now required even backyard farmers to apply for discharge permits from it.

The agency tasked to keep Laguna de Bay’s waters fit for fish propagation and farm irrigation also now required such entities to put up their own wastewater treatment plants, regardless of the amount of water their farms used daily.

But compliance with, and enforcement of, the department order and the Majayjay ordinance might take place later than sooner, at least when it comes to backyard farmers.

The Majayjay ordinance, meanwhile, seems impaired by low fines for violators. It is also likely to be ignored by Majayjay’s backyard hog farmers, since most of them don’t even bother to apply for permits.

A fourth-class town that is more than 100 kms south of Manila, Majayjay has one hog for every three residents, a ratio higher than the national average.

Many of Majayjay’s hog-raisers have not secured business, sanitary, and environmental permits from local and national government agencies, local officials admit.  A few entities have just one or two of the permits needed to legally operate their piggeries, backyard or otherwise, said Teofila T. Solmoro, Majayjay’s Municipal and Environmental Resources Officer.

Under previous regulations, backyard farms had been exempted from securing discharge permits, as long as their daily water consumption was at 12 cubic meters or below. To enjoy the same privilege, those who owned hogs in commercial quantities took to distributing their litter among available backyard farms.

Called ‘pa-iwi’ or ‘pa-alaga,’ the informal pig-raising arrangement is pervasive mostly in Central Luzon and CALABARZON, the top two hog-producing regions of the country. But the system has blurred the lines between backyard farms (those with 20 adult hogs or fewer) and commercial farms (those with 21 or more), as defined by the Philippine Statistics Authority (PSA), and enabling even the latter to skirt local as well as national laws.

Majayjay's Municipal Ordinance No. 003-2018 was supposed to change that, at least within the town. But even the mayor admitted that penalties for violating the septic tank ordinance are so low that they hardly have had any effect at all.

“I’ve asked and begged [members of the municipal council] to increase the fines but no action has been taken,” said Mayor Carlos Invinzor ‘Jojo’ B. Clado in an interview with PCIJ last September.

Whether homeowner or business proprietor, first time offenders get issued a notice of violation, according to the ordinance. Businesses, including piggeries, big and small, face fines of PhP2,000 and get issued a cease-and-desist order if they are found violating the ordinance for the second time. (Residents are fined P1,000 and ordered to render community service for the second offense; PhP1,500 and the non-issuance of a barangay clearance on the third. Penalties for succeeding offenses are the same as the third except that the fines are increased to PhP2,000.)

Clado, who was re-elected in the 2019 polls, also said, though, that imposing hog-raising restrictions will definitely affect many residents. In another interview last November, he said that he was awaiting the approval of Majayjay’s 2017 comprehensive land-use plan before taking action against polluting hog-raisers.

The proposed plan has allotted an area at the town’s outskirts, which has been classified it as an agro-industrial zone. Located away from the town’s rivers, the zone is where the town’s hog and poultry farms can relocate so that that they all can continue operations without harming the environment or, for that matter, bothering neighbors with the foul smell of swine.

Once the plan is approved, hog and poultry farmers will be given “five to ten years to move or you get out of town,” Clado said.

No land use plan

As of March 2019, the town’s 2017 land use plan remained pending at provincial and other agencies’ offices, a Majayjay municipal planning office personnel told PCIJ in an email.

LLDA, meanwhile, has set aside backyard farmers and is instead focusing first on bigger polluters. Said Hernandez: “The LLDA can’t cover all the establishments within the whole region.”

The agency’s jurisdiction includes Laguna, Batangas, and Rizal, parts of Cavite, a town in Quezon, and some portions of Metro Manila.  Waterways in these areas are covered by the LLDA because they flow into Laguna de Bay.

In 2017, LLDA shut down what were reportedly the two largest hog facilities in Majayjay.

The first, shuttered in May that year, was run by Primera Agro Development Corp., an animal feeds company with headquarters in Batangas and partly owned by Rosen Clado-Alcantara, a relative of the mayor. The second, closed in November 2017, was a piggery owned by businesswoman Shirley Uy.

Primera, which operates a wastewater treatment plant in its Majayjay facility, raised anywhere from 2,000 to 5,000 hogs, two local officials told PCIJ. They said that Uy’s piggery had a slightly smaller number of hogs although it still ran into the thousands.

Wastewater from both farms failed five water-quality primary parameters, some of whose limits were exceeded as much as 60 times.

The biochemical oxygen demand (BOD) of the wastewater from Primera, which already faced a P5.36 million fine for a similar violation, was at 2,118 milligrams per liter, more than 40 times the allowed limit of 50 milligrams or below, based on effluent standards for Class C waters (or those for fish propagation, recreation such as boating, and manufacturing after treatment). The parameter measures the amount of oxygen needed by organisms and bacteria to break down organic matter (such as hog waste) in the water.

The chemical oxygen demand (COD) of the company’s wastewater was at 5,945 milligrams per liter, almost 60 times the allowed limit of 100 milligrams per liter based on the same effluent standards. COD measures the amount of oxygen needed to break down chemicals, industrial waste, and other pollutants in the water.

Moreover, besides being farm owners, both Alcantara and Uy are also ‘financiers,’ and are active in pa-iwi, paying people with backyard piggeries to raise their hogs, local officials interviewed separately by the PCIJ said.

“Ninety-five percent of all the hogs in barangays Oobi and Botocan are owned by Shirley Uy,” Arnel S. Rosas, Majayjay’s development and planning coordinator and one of the mayor’s trusted aides, told PCIJ in a September 2018 interview.

For his part, Mayor Clado said that he took a hands-off approach in the closure of Primera, a move that caused a rift in the relationship with his family. “I was just protecting my name and the environment as well,” he told PCIJ in a September 2018 interview.

Alcantara refused to be interviewed or to speak on record about the whole matter, citing illness. Uy met PCIJ several times at her residence but also refused to go on record.

In any case, although LLDA has yet to go full throttle in enforcing the DENR order, these two cease-and-desist orders may have helped curb river pollution in Majayjay. The agency’s apparent message to all hog farmers, both backyard and commercial: shape up or face closure.

The question, though, is: How many hog farmers are paying attention?