2 worlds, 2 realities? They rank high
in surveys, but not on social media

Most of the candidates are from the administration-backed Hugpong ng Pagbabago (HNP) and the Liberal Party’s Otso Diretso. The number of candidates covered by the overview/scan reached 29 because the Pulse Asia Top 24 list had some slots occupied by more than one candidate. As a result, 13 from HNP, eight from Otso Diretso/LP, and eight from other groups or independent candidates are included in this report.

IT’S  ALREADY a given how Filipinos are such big users of social media, especially Facebook. Last February, PCIJ conducted a social-media audit of what some senatorial candidates in the May 13, 2019 midterm polls were doing online during the pre-campaign period and found that they regarded these as a ‘promotional touchpoint”.

This hasn’t changed much, based on the follow-up scan PCIJ conducted during much of the official campaign period, but what is interesting is that those with the biggest Facebook fanpage sizes aren’t really seeing similar numbers in the surveys conducted by companies like Pulse Asia, nor even in the ongoing count of the votes cast last Monday.

In any case, this social-media overview and Facebook content scan aim to provide the audience a grasp of how the senatorial candidates that emerged as the top 24 in Pulse Asia’s February 2019 nationwide survey made use of social-media between February 12 and April 30. Specifically, who among the candidates included in the set could possibly have more investment and allocation on the digital channel, in terms of monies, time, and effort?

Most of the candidates are from the administration-backed Hugpong ng Pagbabago (HNP) and the Liberal Party’s Otso Diretso. The number of candidates covered by the overview/scan reached 29 because the Pulse Asia Top 24 list had some slots occupied by more than one candidate. As a result, 13 from HNP, eight from Otso Diretso/LP, and eight from other groups or independent candidates are included in this report. 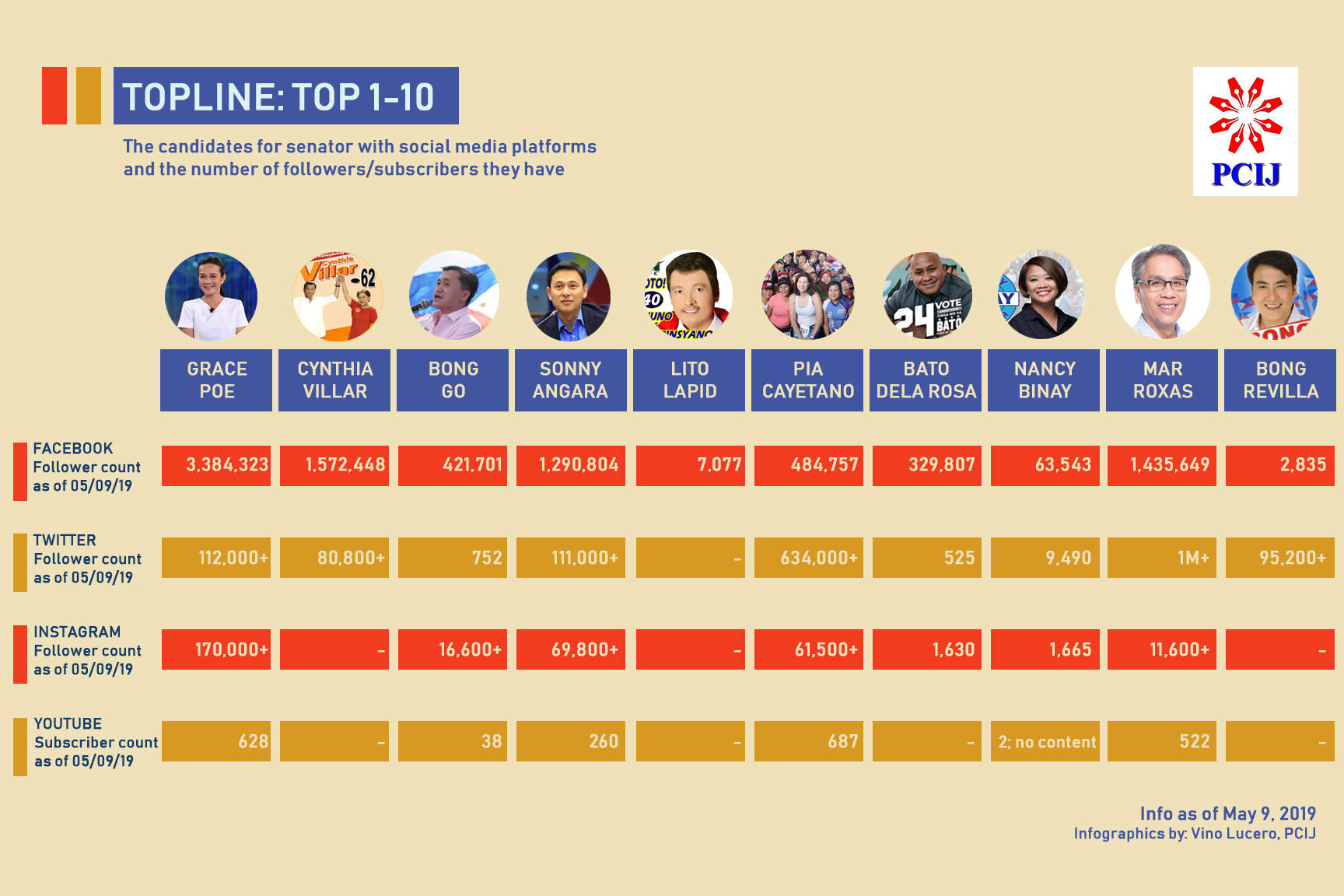 The main questions that guided the overview and scan were: Given that the use of social media is practically free yet could help one reach a significant number of potential voters, are these candidates using it responsibly? Who is saying what, and publishing what type of content online, especially on the country’s most browsed social media platform, Facebook?

The team’s takeaways are merely observations based on identified trends, and neither assume nor conclude that the candidates are actually doing such efforts such as, but not limited to, having ‘paid’ supporters/trolls and boosting using advertising monies… unless stated otherwise with supporting data/documents. 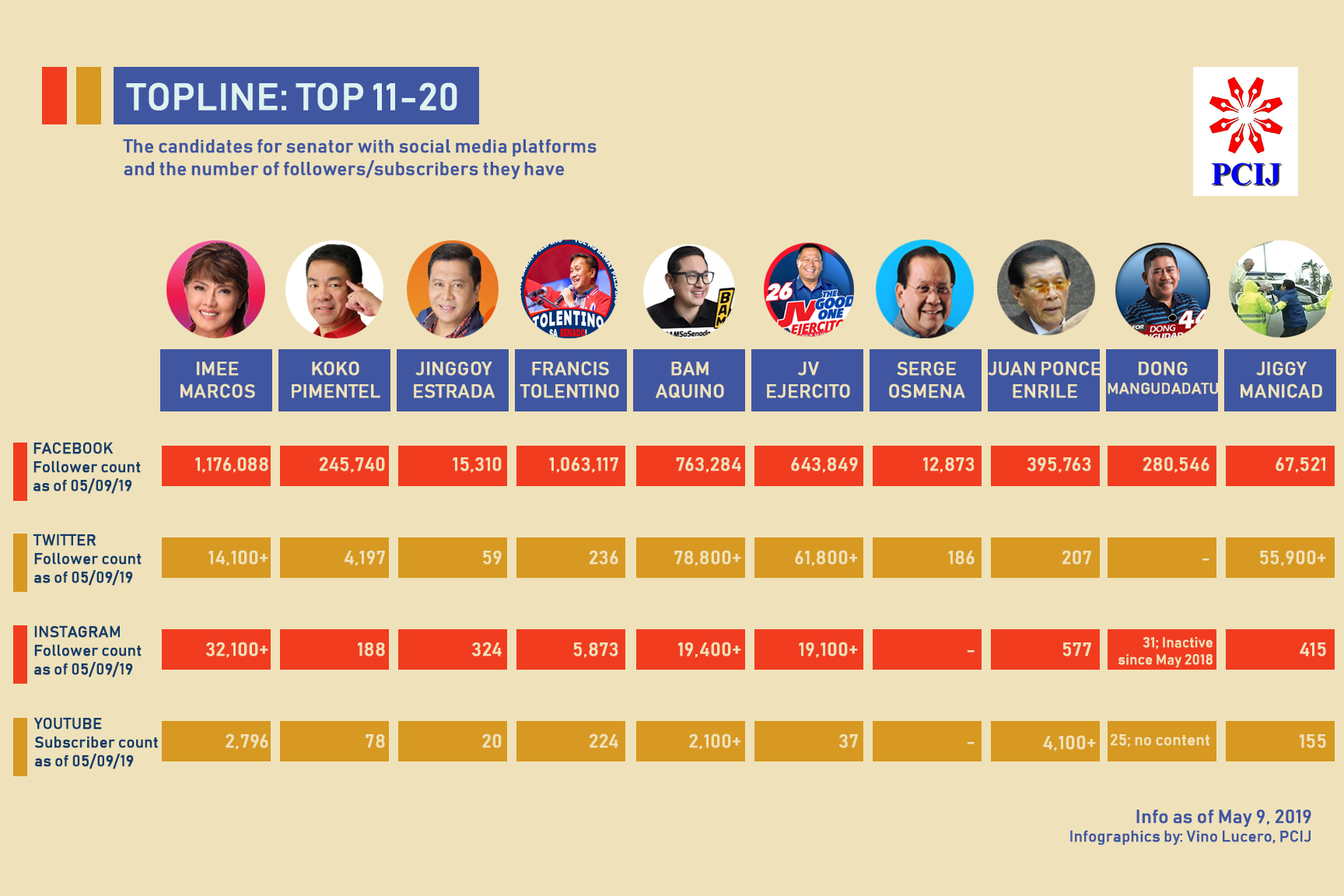 The key figures –follower/subscriber base and number of FB posts published –used by the team are the actual data at the time of writing, May 10, 2019. Should there be discrepancies in the key figures after May 10, it is because the pages’ follower/subscriber base have already increased or decreased, and certain FB posts may have been deleted or hidden from the candidate’s timeline.

Part 1 of this report provides the social-media landscape overview and asks who is on which social media platform, and how big are their follower base. It also provides a rundown of the social media assets where 29 midterm election senatorial candidates are active.

Part 2 focuses more on how the candidates used social media for their campaigns. 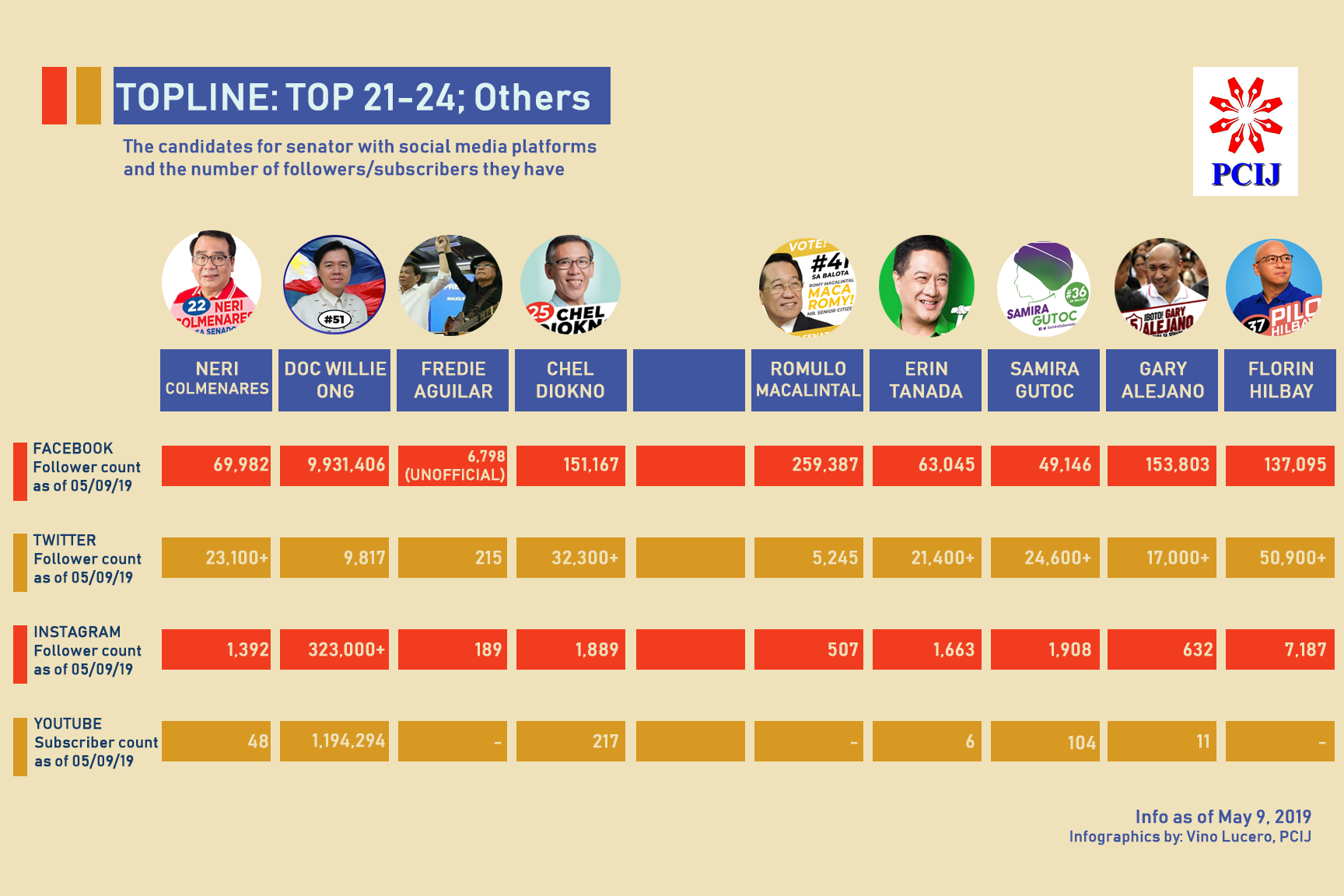 While efforts, strategy, and tactics vary, consistent across all 29 candidates scanned would be their use of Facebook to 1) update constituents and other stakeholders about their on-ground activities and happenings, and 2) to further promote their above-the-line (ATL) materials such as, but not limited to, flyer/poster key visuals and TVCs.

Compared to the pre-campaign period where the candidates were generally more playful in terms of content types and messaging, the candidates during the campaign period appeared to be primarily active on-ground and to be using social media, specifically Facebook, as a medium to inform the publics about their activities and whereabouts (prior to the said engagements) and as a diary or log of sorts (after the events and happenings have taken place), whether in the form of FB Live coverage videos or post-mortem photo albums and video highlights.

Instagram appeared to be a platform where most of the 29 candidates just post for presence and minimal engagement, while YouTube appeared to serve as a repository platform of all their videos that aired on TV, online, and/or those AVP kind of materials that they play during events. Some candidates, like Bam Aquino, started boosting pre-roll YouTube ads during the latter part of the campaign period.

When ranked according to the candidates’ follower count on the perceived official Facebook fan pages used to campaign, however, the survey-leading candidates did not necessarily come out on top.

Meanwhile, websites appeared to serve merely as a landing page of posts that have a drive-to-site call-to-action, especially when encouraging the audience to “learn more” about the candidate’s advocacy or platform.

(See Table: Candidates: Rank by Survey and By Size of Facebook Fan Page Base) 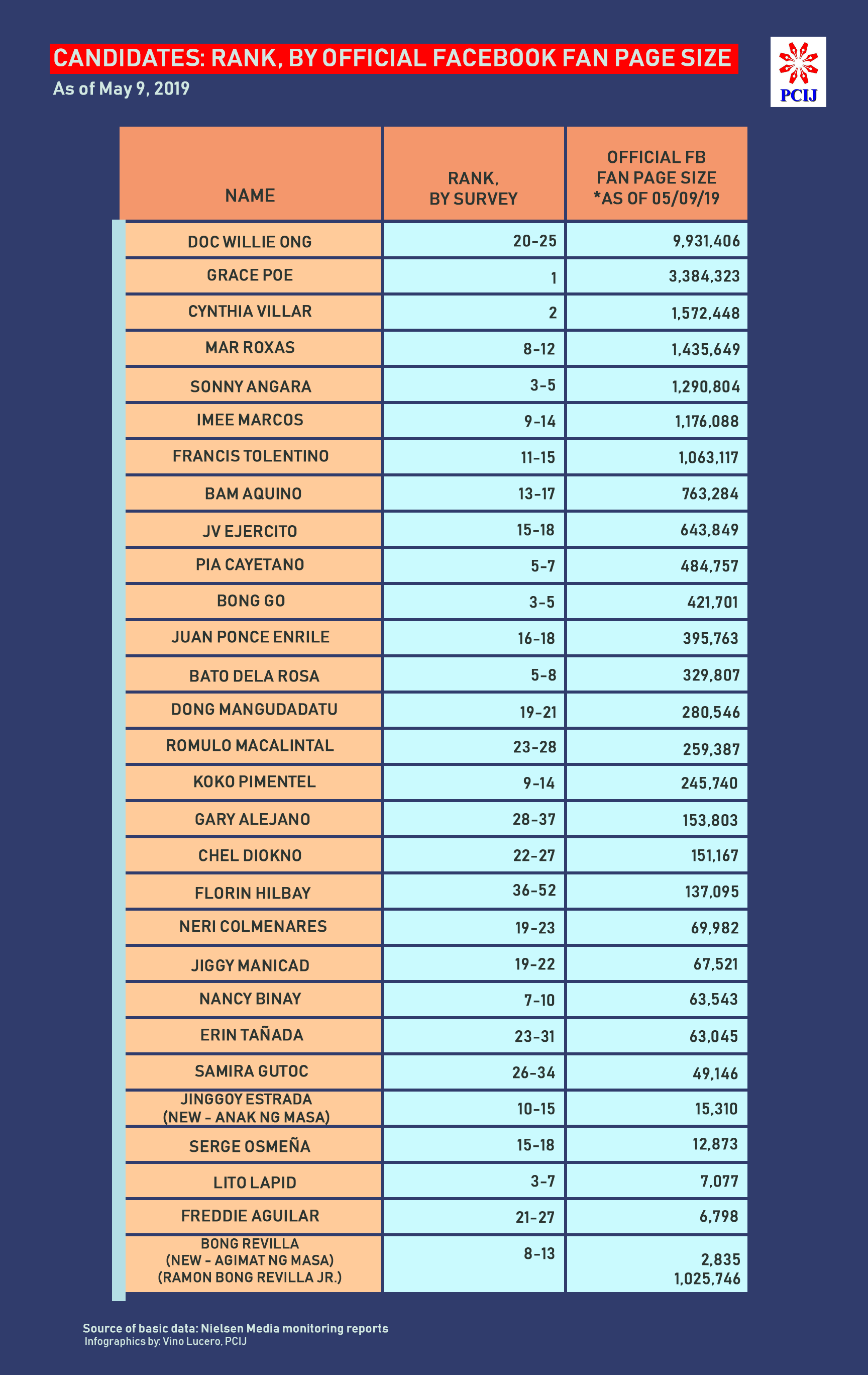 Then again, because some candidates used their existing Facebook pages for their campaigns, they already had a high follower count prior as compared to the likes of Jose ‘Jinggoy’ Estrada and Ramon ‘Bong’ Revilla Jr. who decided to make use of new FB pages, both prioritizing their campaign branding ‘Anak ng Masa’ and ‘Agimat ng Masa,’ respectively, over the follower base.

In terms of posting frequency during the campaign period covered, three candidates who are neither HNP nor LP posted much more often. Overall, the 29 candidates scanned published an average of 224 FB posts during February 12 to April 30. 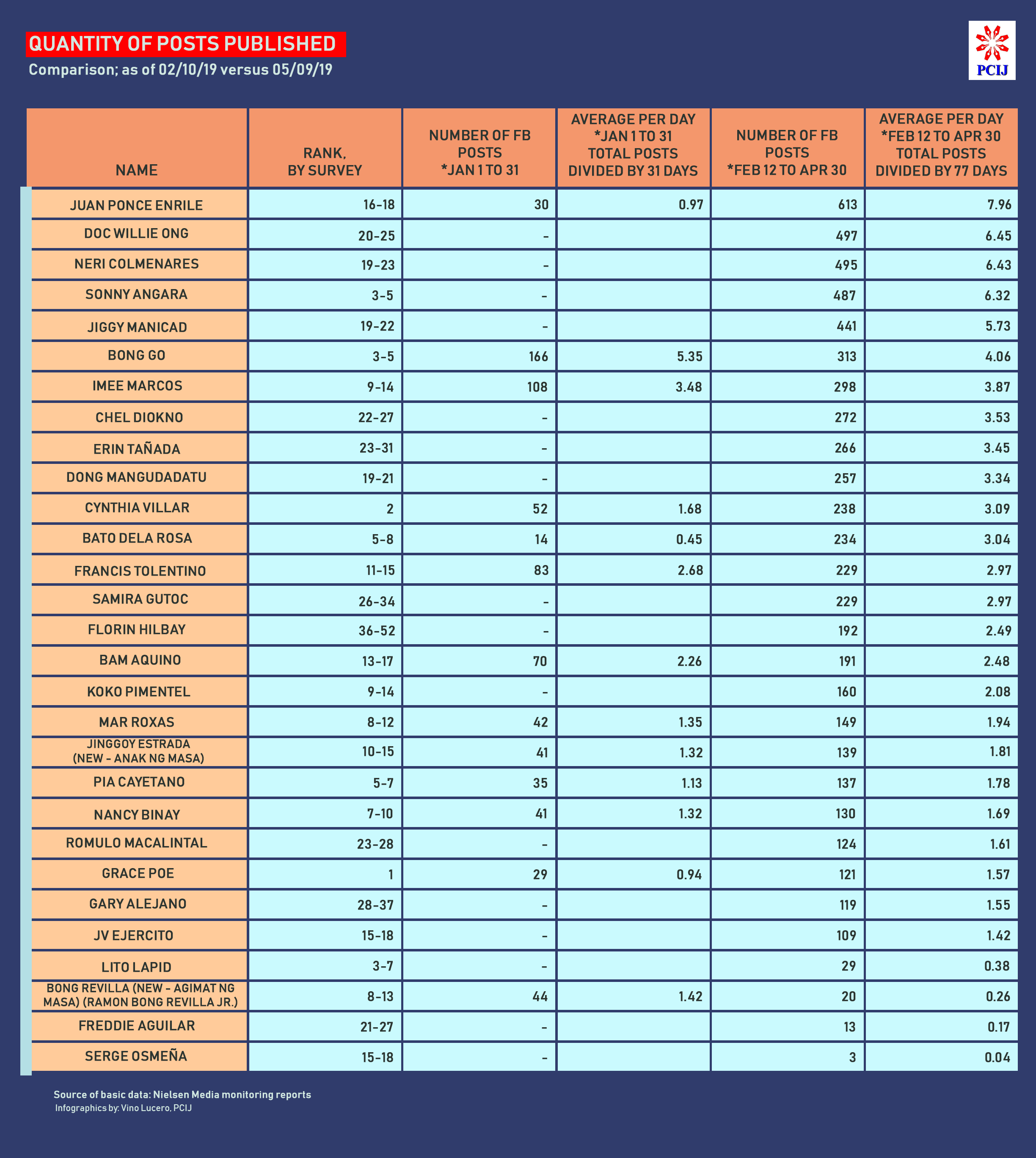 From February 12 to April 30, 2019, the 29 candidates included in this scan published an average of 224 posts. Common across all 29 candidates are these types of content:

Another interesting use of Facebook during the campaign period was to clarify alleged black ops. LP’s Jose Manuel ‘Chel’ Diokno and Samira Gutoc actively made use of Facebook to release statements regarding allegations and other matters that they deemed worth challenging or countering.

As mentioned in Part 1, it appears that Facebook has generally taken a backseat for most of the candidates, as it served merely as a supplementary platform for candidates to ‘sustain’ their presence after being highly active on-ground and offline. Twitter appeared to be a more frequently used platform, with candidates ‘trend jacking’ (or riding on trending topics) and jumping in conversations of potential voters, as if they, together with their social media teams and volunteers, were closely listening to Twitter conversations that mention them, or their respective groups.

Not included in the scan are detailed notes on the efforts of the candidates and groups’ teams and volunteers. HNP, Otso Diretso, and the other groups and individual candidates have supporters who actively promote their respective bets by way of posting on their own online, whether through their personal social media accounts or fan-made Pages.

Notable efforts from the ‘CHELdren’ of the ‘Youth for ChelDiokno’ Facebook page, supporters of Bong Go, and the other senatorial bets can be found not just on Facebook, but also on Twitter and websites in the form of long-form blog posts.

Now more than ever, intense arguments between citizens who are vocal pro- and anti-Duterte administration can be found especially on Twitter. Hateful — to some extent misleading — memes that are borderline bashing of certain candidates by citizens or netizens are also spreading on social media, and intrusion from a particular candidate has been observed.

(See Table: Candidates: Rank Based on Growth of Official Facebook Fan Page Size (as of 05/09/19)) 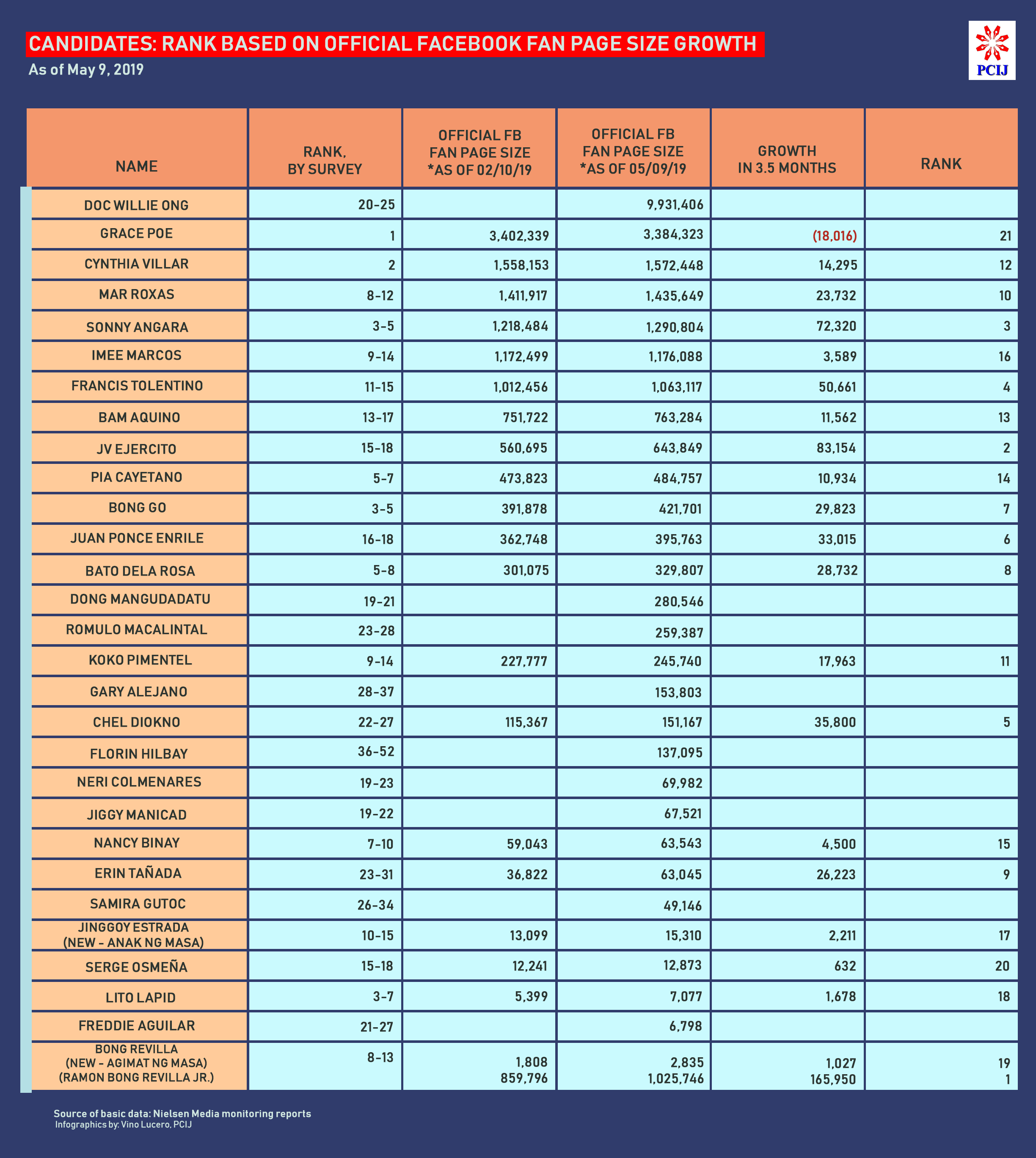 From a scan of their social-media accounts, here are the perceived influencers of the candidates: 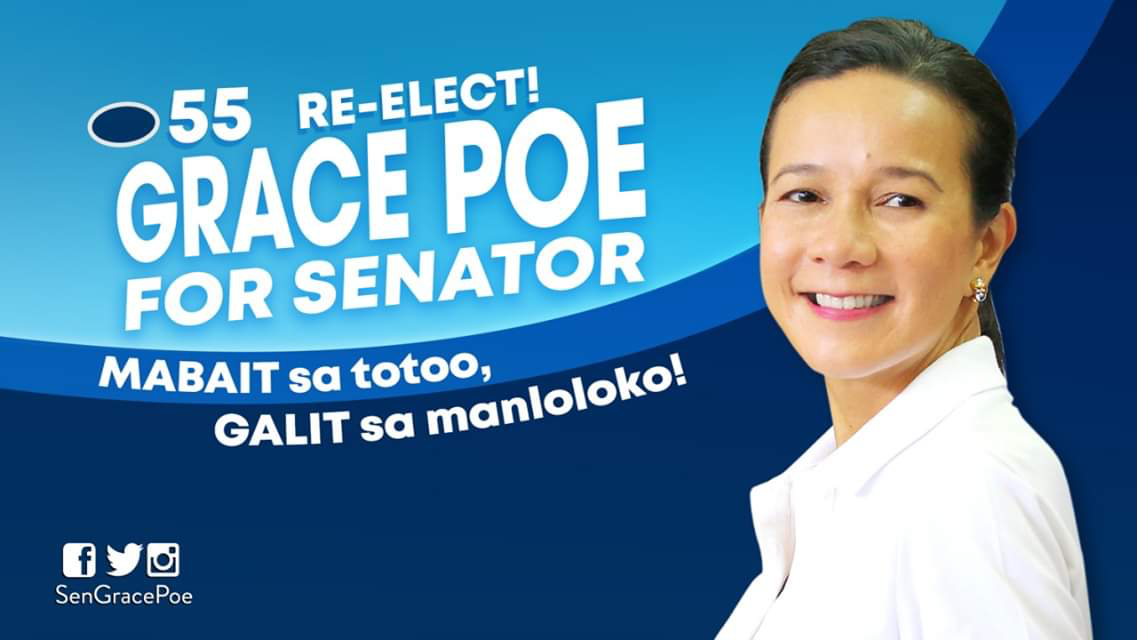 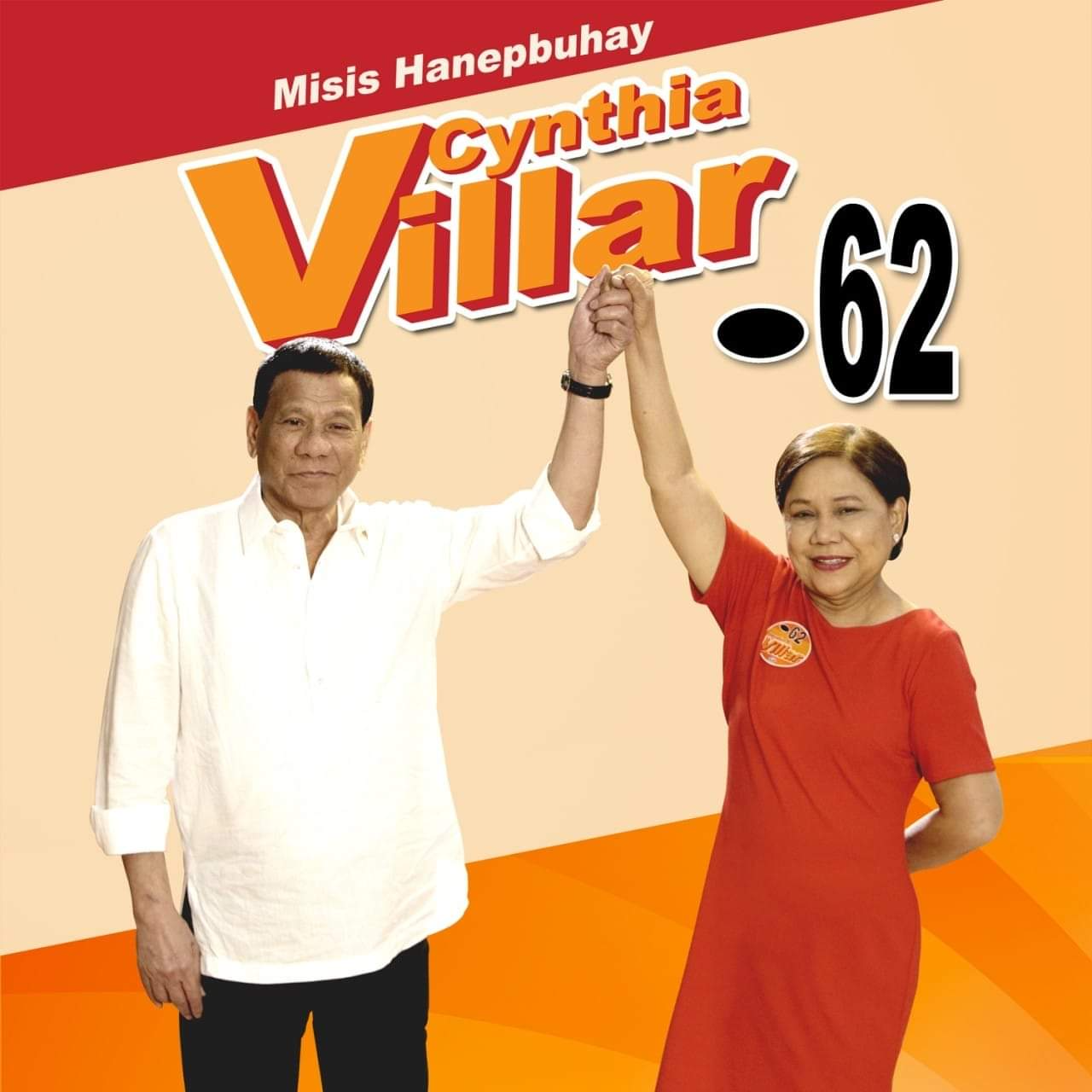 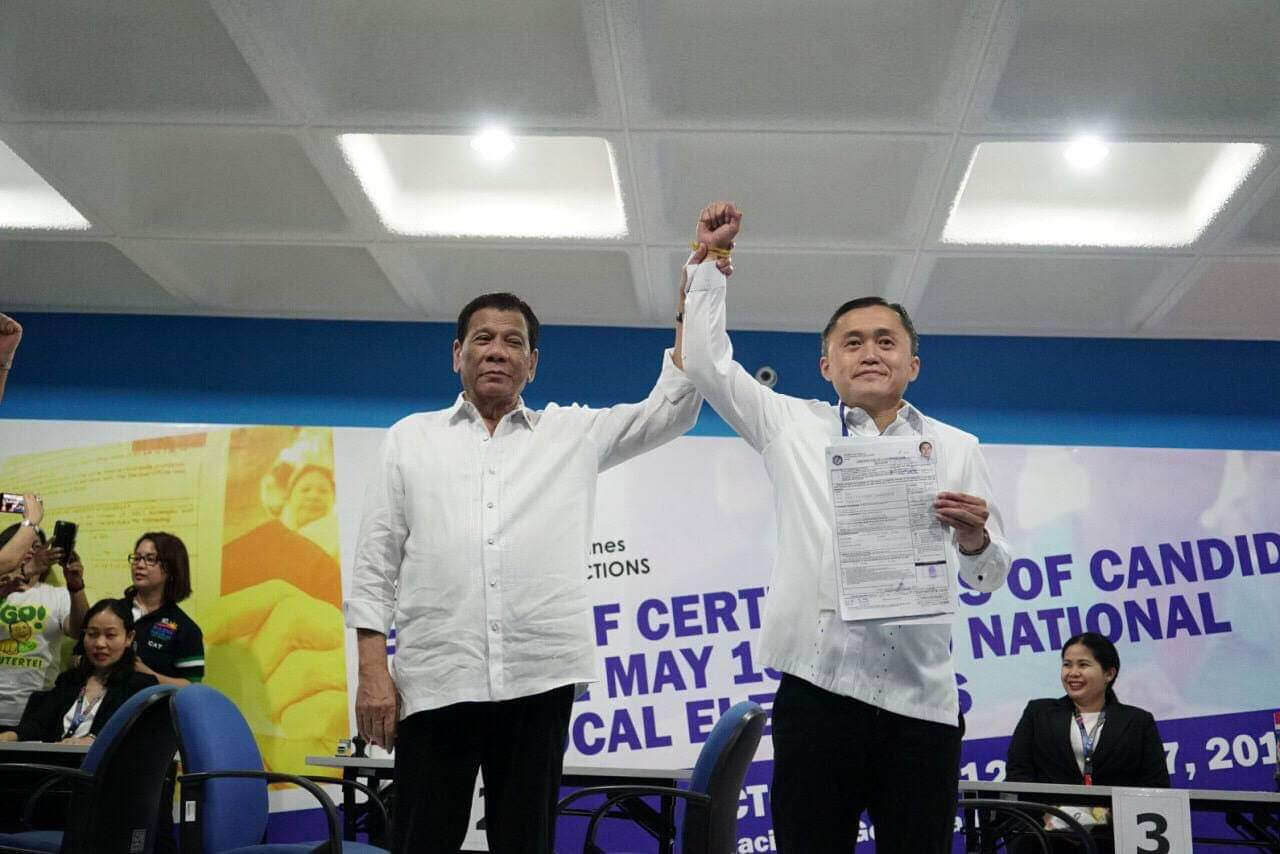 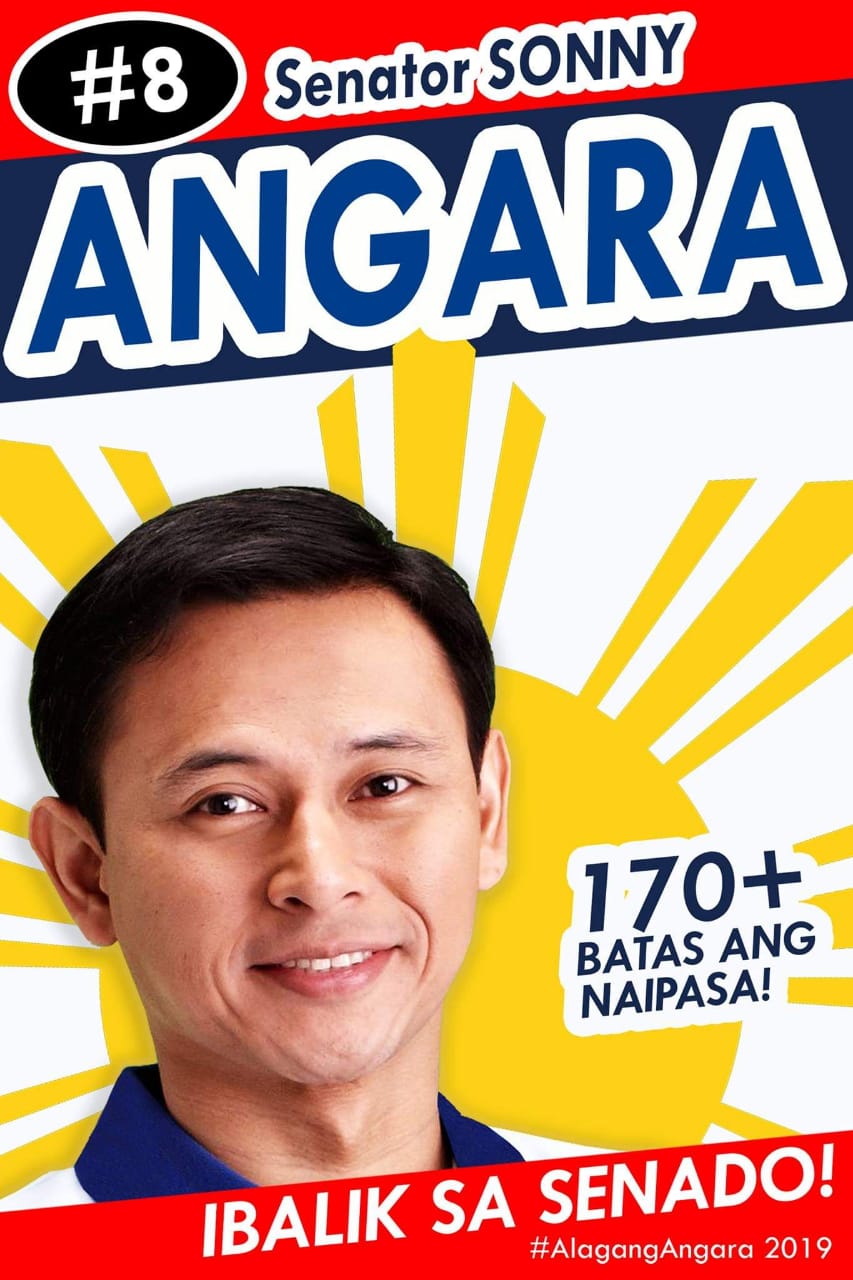 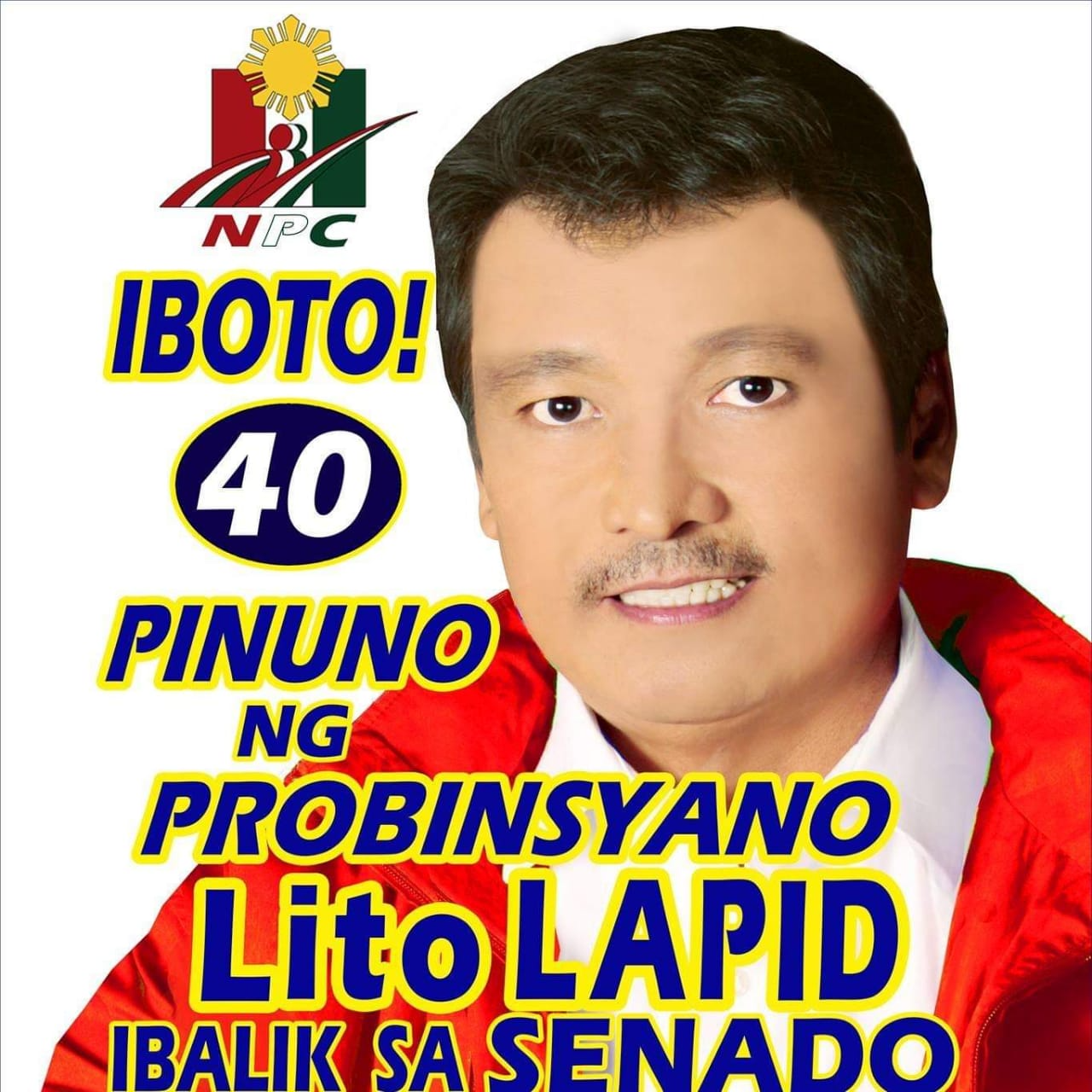 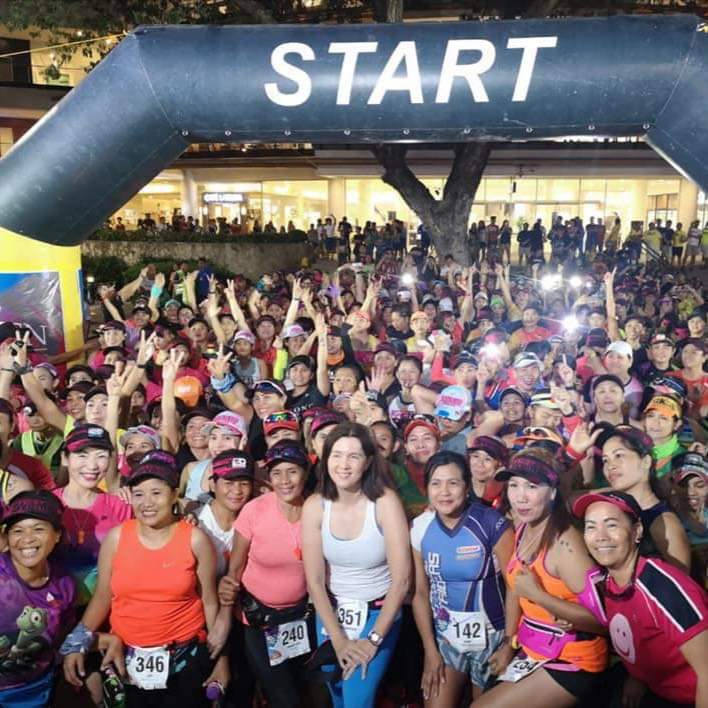 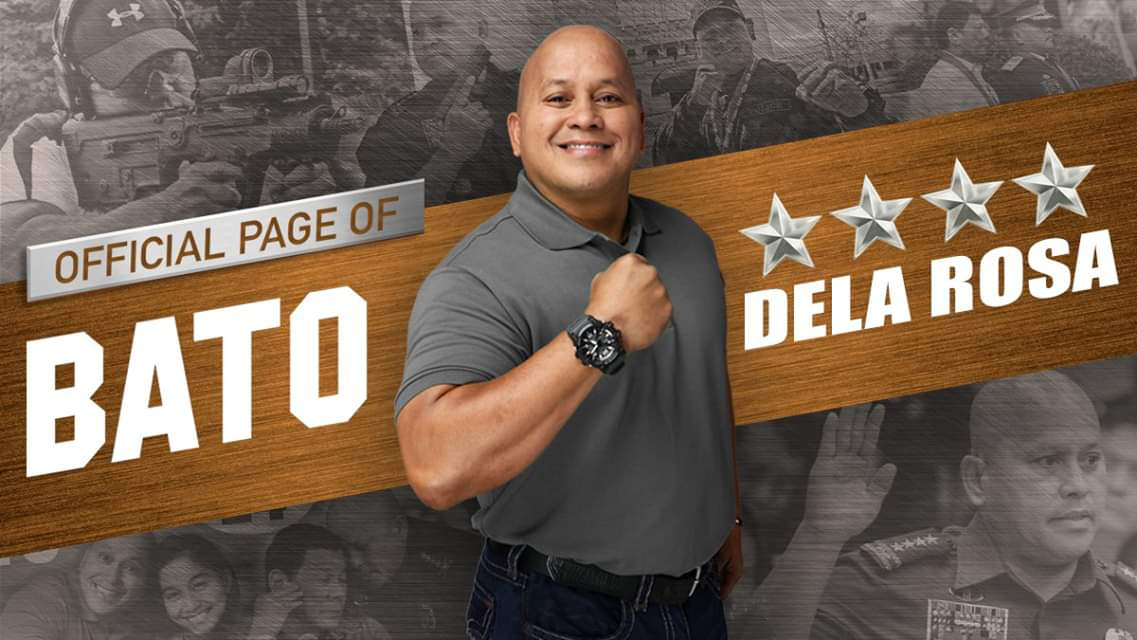 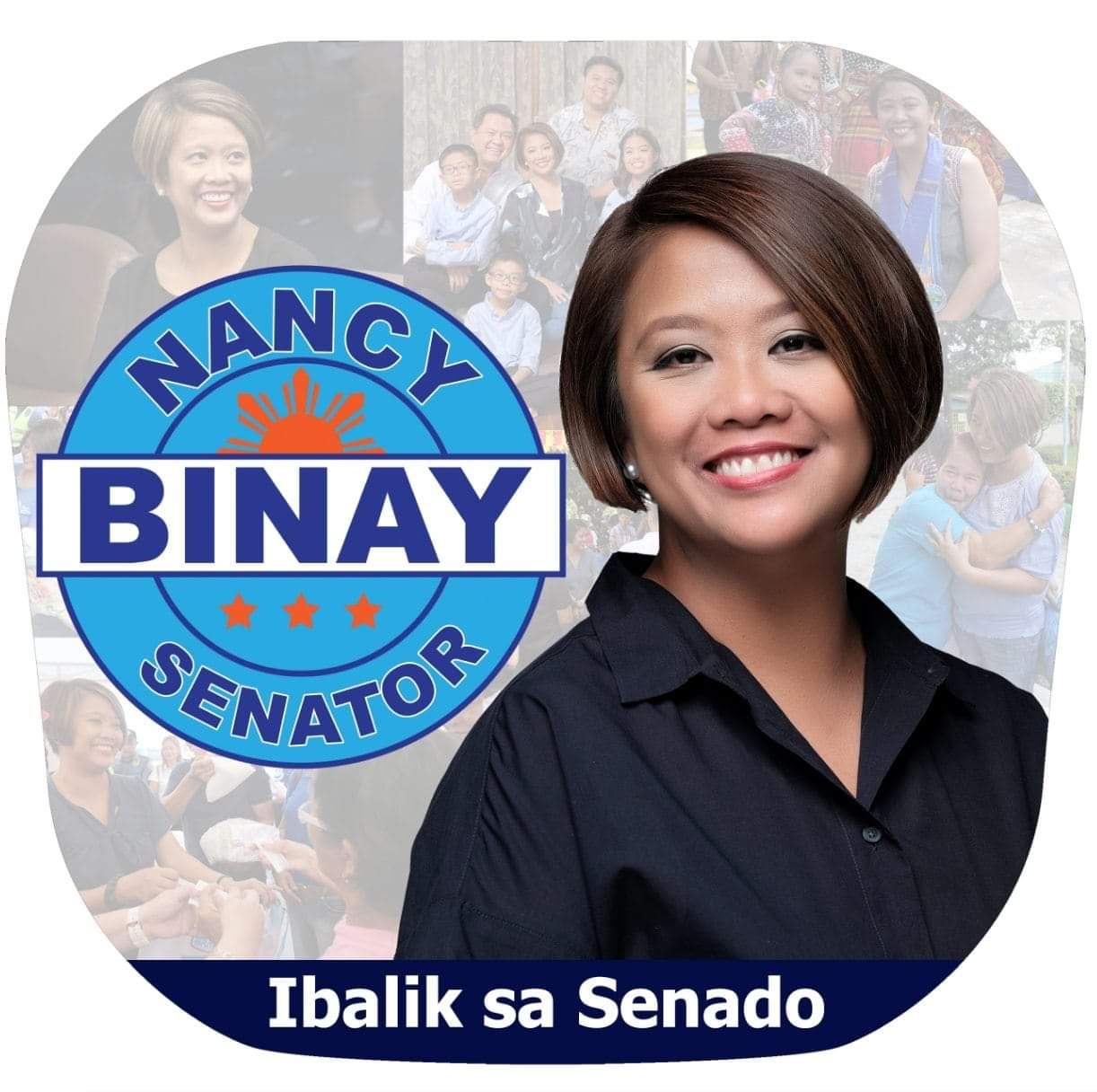 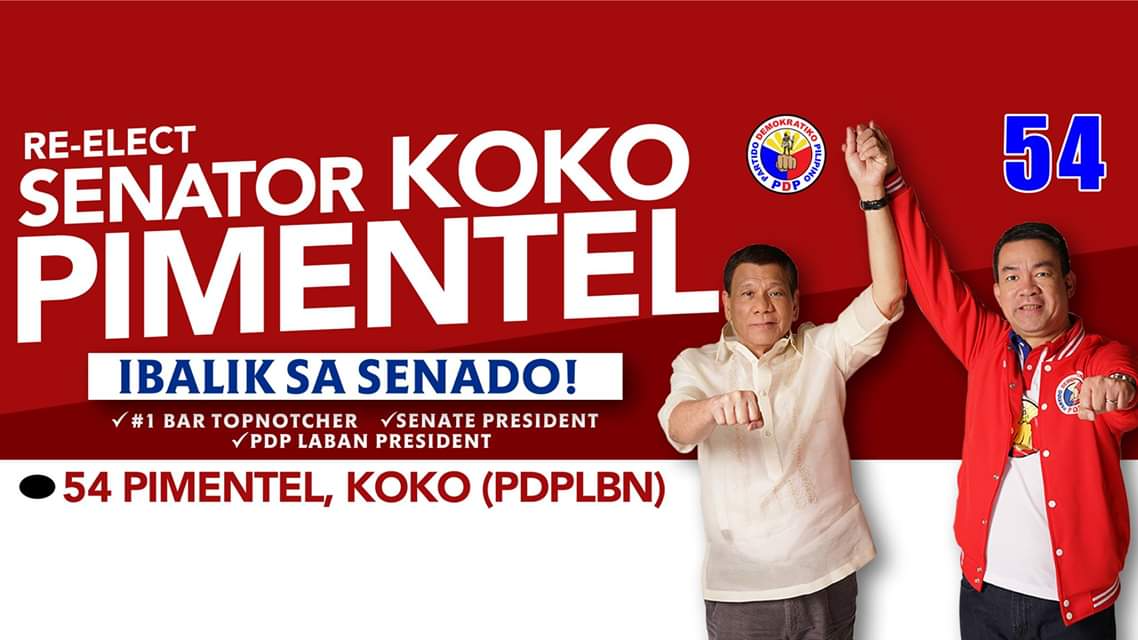 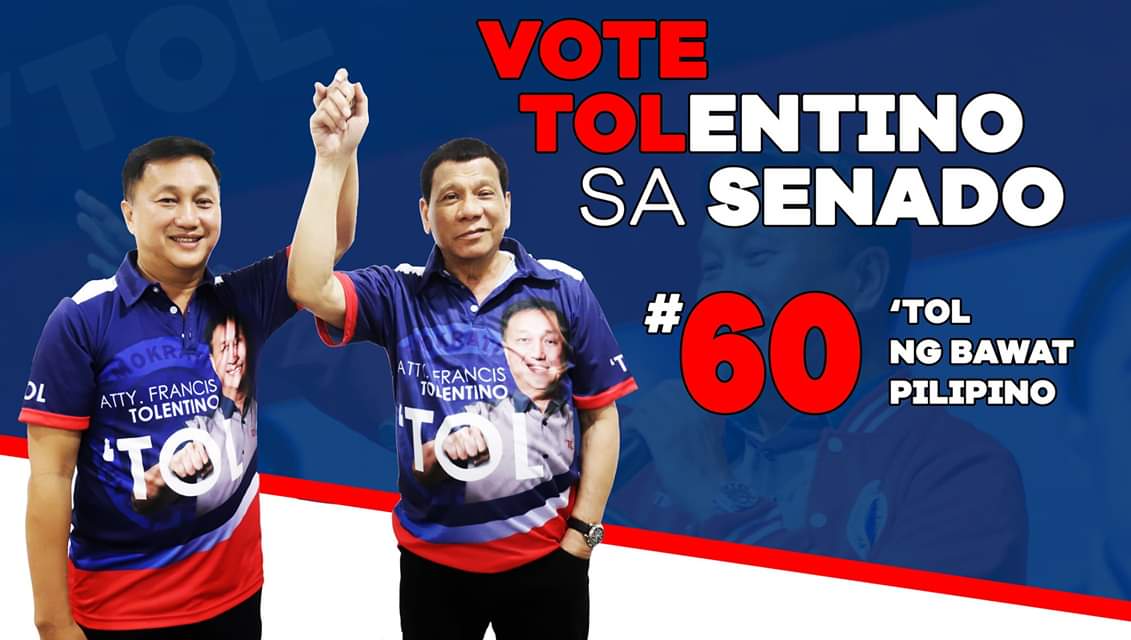 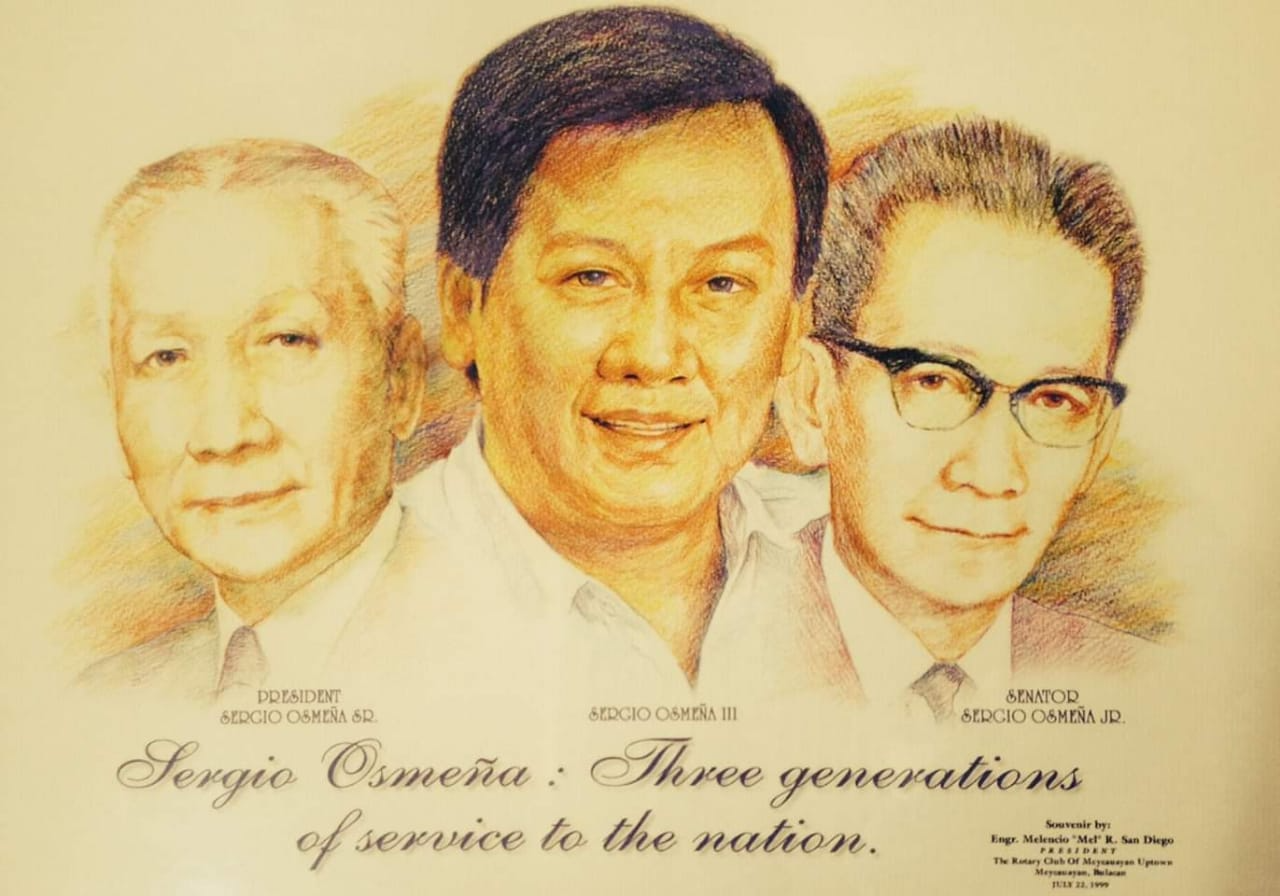 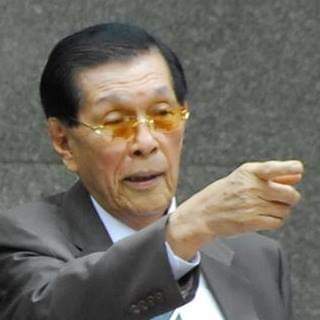 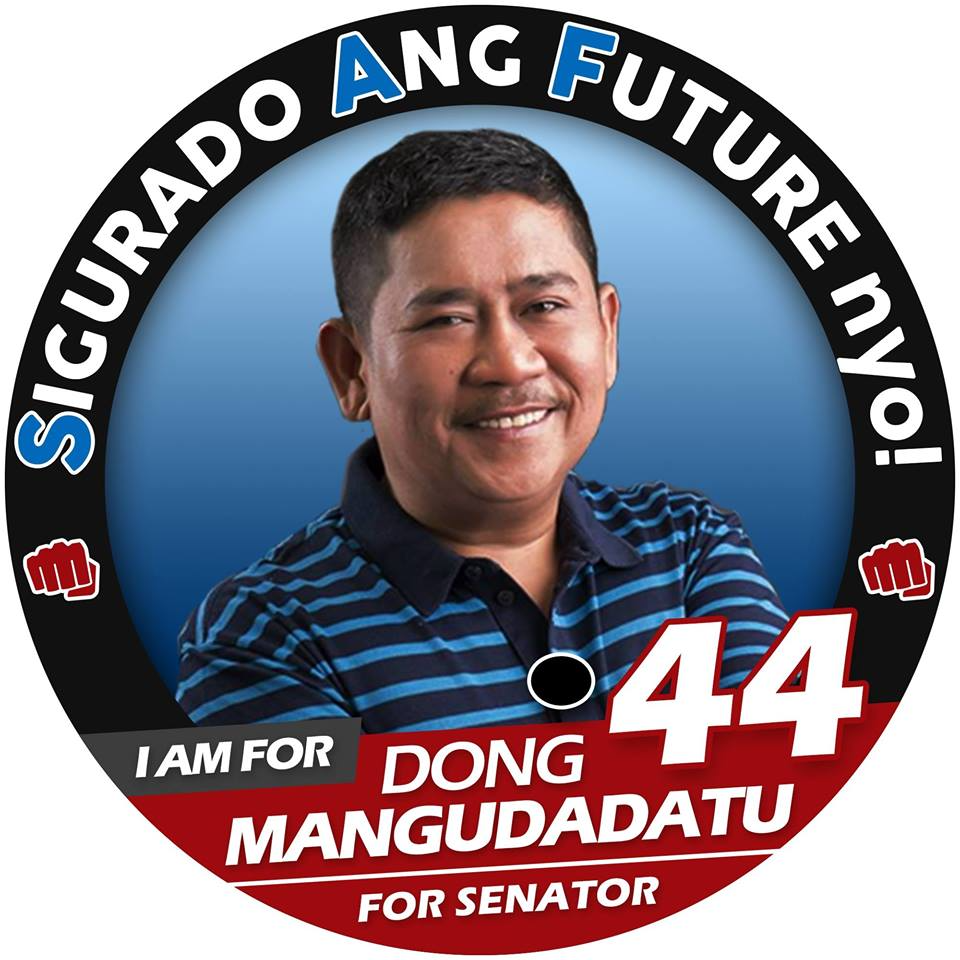 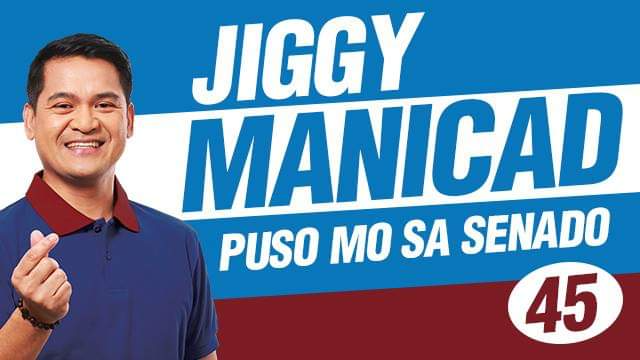 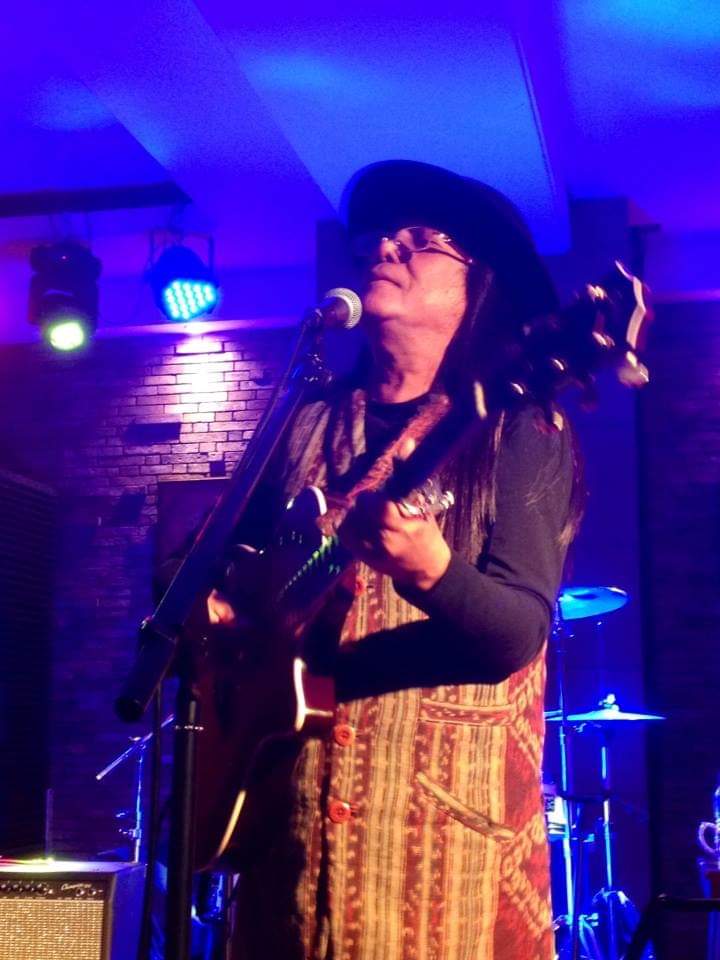 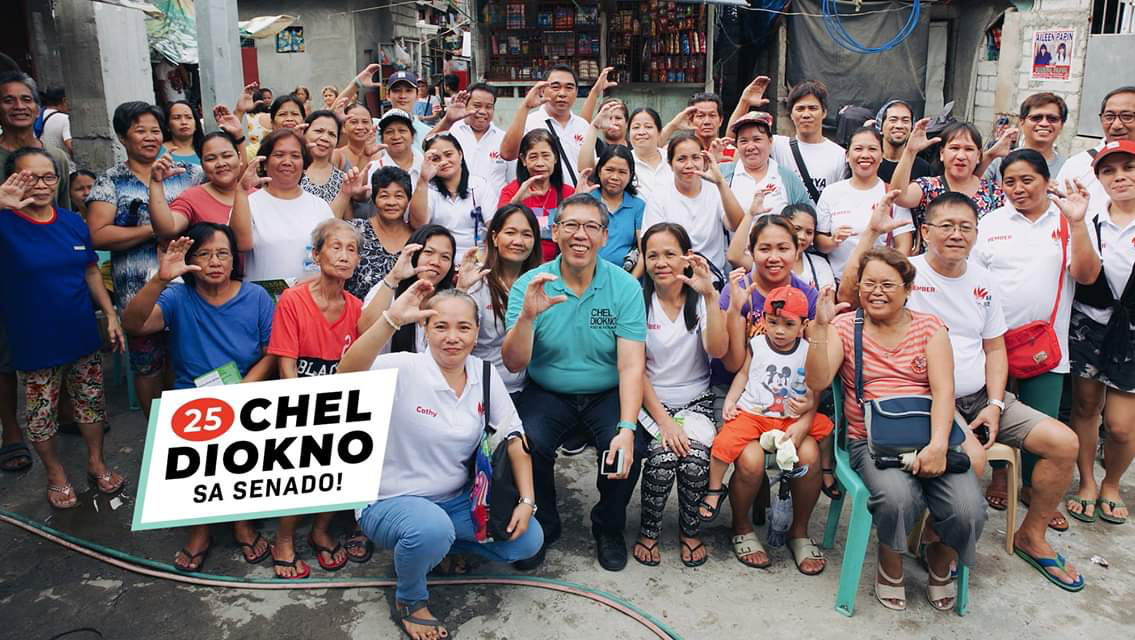 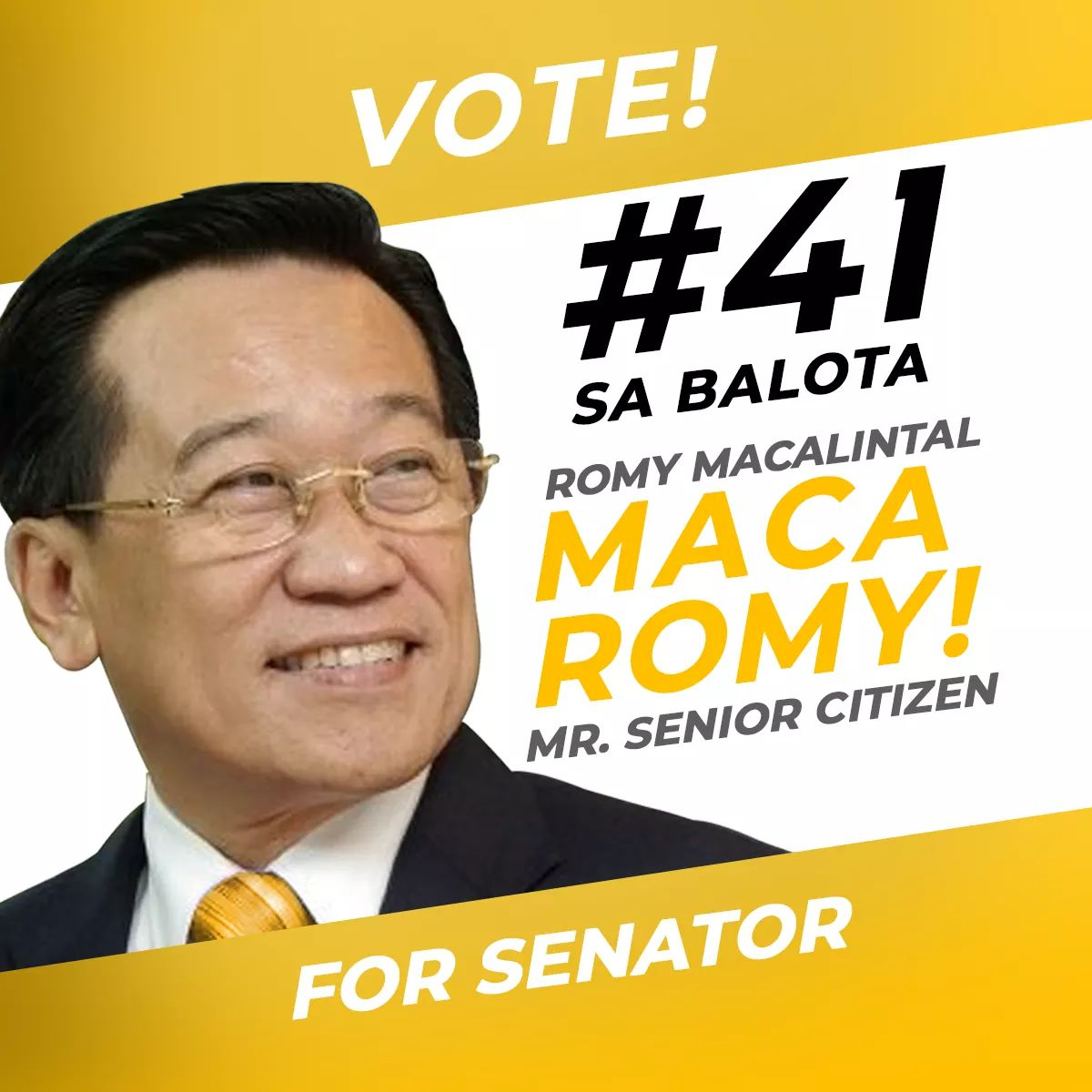 A material published on someone’s Facebook page, whether in the form of a static post, GIF/slideshow, video, long-form note, or text status.

The sum of all the Likes/Reactions, Comments, and Shares or Retweets a post receives.

The average number of engagement a particular set of posts receives.

Notes: Our primary assumption should always be that the posts are ‘organic’ and not boosted.   There is no way for us to be able to prove, with data and facts — not even with a social listening tool — that these candidates are boosting their Facebook posts,  unless we become administrators of their pages. We are playing safe with words/fillers such as “possibly as a result,” “may be,” and stating that the candidates’ content may simply be as relatable to the audience it is reaching, thus getting traction in the form of not only mere Likes or Video Views, but also Comments and Shares.

Press Freedom: The Slide Backwards
Across 11 Nations of Southeast Asia

POLITICAL FREEDOM and civil liberties are in a downward spiral globally. Democracy is not only in retreat, but is under assault in Southeast Asia.