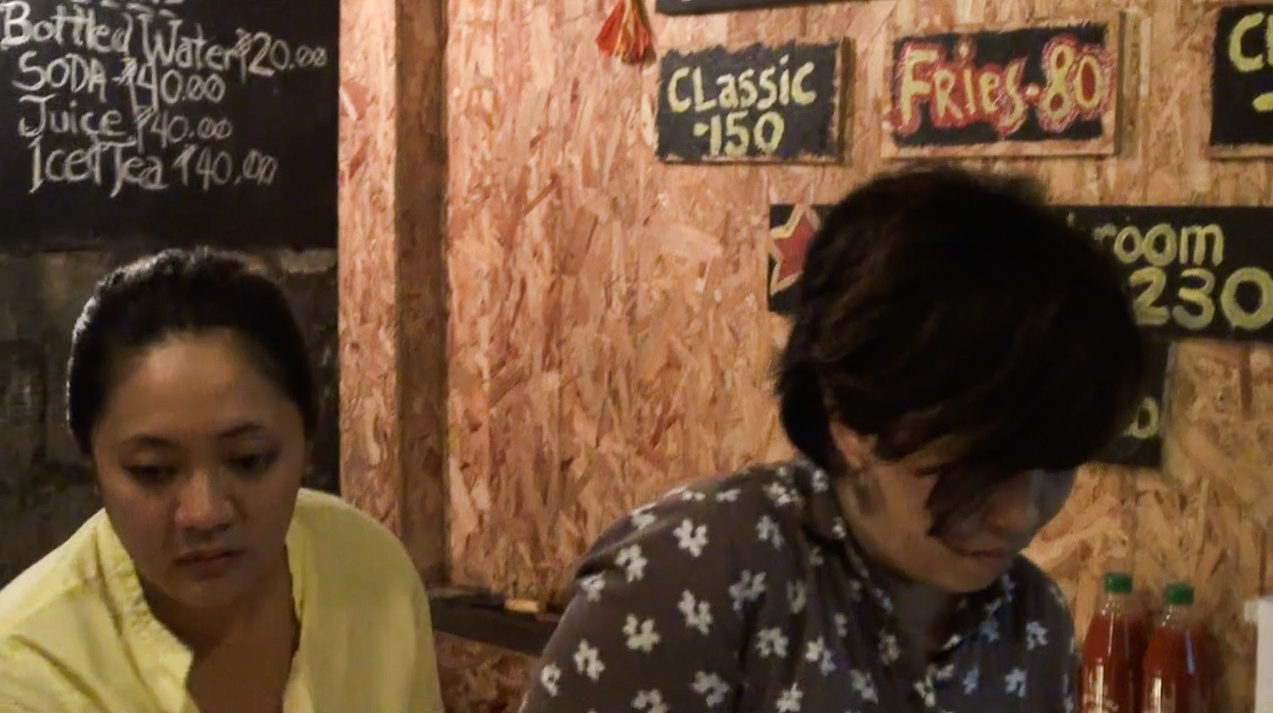 In large part, this is because mobilizing the aid funds has been grossly inefficient, if also severely impaired by the massive devastation, leaving efforts stuck at the recovery stage instead of progressing toward rehabilitation.From seven to midnight each evening, Torres and Salazar can be found at Pop-up Kitchen, flipping burgers for locals and foreigners, many of whom are aid workers doing relief and rehabilitation projects in Tacloban and nearby towns. Opened just this July, Pop-up Kitchen is among the 103 new eatery establishments in Tacloban post-Yolanda.

The city government relaxed its rules following the disaster by extending the deadline for payment of business taxes, and for application and renewal of permits and licenses until last June. This gave the likes of Torres and Salazar an easier time to start small businesses, including those that are now benefitting from the presence of transients with high spending capacity: the aid workers.

But relief operations have not only given businesses here new customers. Innovative entrepreneurs have also saved on costs by reusing the discarded tools and structures from relief activities. Torres and Salazar, for instance, made chairs and tables out of pallets left behind by an international nongovernmental organization after its emergency response. A nearby establishment turned an old trailer truck to a mobile bar.

Pop-up Kitchen. “Vanessa Salazar, left, and Trish Torres, flip burgers every night. They run Pop-Up Kitchen that has been serving comfort food for aid workers from other countries who are helping in relief efforts in Tacloban City. Photo by Julius D. Mariveles

Private sector recovery appears to be relatively faster than that of the public sector in the city. While many government buildings are still needing repair – forcing their occupants to hold office elsewhere in the meantime — many private businesses have already resumed their operations in their original locations.

Nonetheless, Tacloban’s rate of increase in the number of businesses this year remains lower compared to previous years.

As of October 2014, data from the Business License and Permits Division of the City of Tacloban show that the number of new and renewed businesses increased by six percent this year. With just two more months left in the year, there is a very slim chance that the figure may still reach the rate recorded in 2013: eight percent. But even that would be starkly below the rate in the pre-Yolanda years, when Tacloban was recording two-digit rises annually in the number of businesses starting up or renewing their permits. (In 2011, the increase was even 25 percent.) 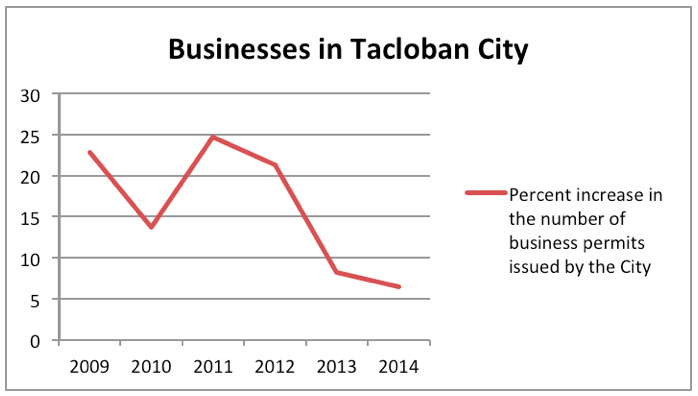 Source of Basic Data: Business License and Permits Division of the City of Tacloban

Businesses engaged in manufacturing of non-essential commodities, as well as hotels and lodging houses, made up many of the enterprises that applied for or renewed their permits in 2014. Those offering vehicles for hire, including jeepneys and motorcabs, were also among the top seekers of new business permits.

Just as in the case of eatery establishments, the presence of foreigners or members of international organizations may have contributed to the rise in the number of those involved in hotel and transportation businesses.

Pop-up Kitchen’s Torres and Salazar admit that the end of Yolanda-related operations may affect their business since foreign aid workers make up the bulk of their clientele. But they remain optimistic that by improving their products and advertising through social media, their burger business will be able to attract more locals as well. – PCIJ, January 2015

“Christian Aid funded this project/report as our contribution to the interest of the public’s right to know how the Yolanda funds are managed and used, and that the findings and recommendations are meant to feed into the policy discourse on Republic Act No. 10121 (The Philippine Risk Reduction and Management Plan of 2010) review and the Yolanda budget process.”

— PCIJ
Posted in:
In This Series

A lot of money, impact too little too late

AS DONATIONS continue to pour in from both local and foreign individuals and institutions for post-Yolanda recovery and rehabilitation efforts, the Philippine government has also loosened its purse strings and released funds to aid the typhoon-struck communities.

A throng of typhoons

RIGHT AFTER calamities have ravaged homes and communities, the government mounts relief and rescue work with speed and vigor – and still has energy left to provide photo-op events for the media. But when it comes to the more difficult tasks of rehabilitation and recovery, or even preparing communities for when the next disaster comes – the downtime between calamities – the government takes on the character of a drunken turtle, rolling out projects and releasing funds in slow and scattered fashion.

AMONG THE scores of projects launched in the wake of super typhoon Yolanda, one assisted the victims in a direct, meaningful way: the reconstitution of the civil registry records of a targeted 100,000 persons.

EXACTLY THREE months after Yolanda struck central Philippines, the government launched a worldwide campaign to thank everyone who had rushed to the country’s aid in the supertyphoon’s aftermath. Aside from print and TV ads, the government also paid for billboards in nine famous cities across the globe – New York, London, Paris, Berlin, Toronto, Tokyo, Seoul, Singapore, and Sydney — expressing the Filipinos’ gratitude for the hand extended to them by people all over the world. Indeed, while Filipinos themselves rushed to help their countrymen in need, the global response to the tragedy was overwhelming.

A FEW weeks after Super Typhoon Yolanda rampaged through Eastern Visayas in early November 2013, the Department of Social Welfare and Development (DSWD) found itself caught in a swirl of controversies regarding the repacking and delivery of relief goods.

DISASTERS USUALLY bring people together, but a few weeks after Yolanda, a video that seemed to highlight a political divide amid tragedy went viral.

Yolanda: The disaster that lingers still

WHEN IT became evident that Typhoon Ruby was going to slam through central Philippines in December last year, many began wondering what would happen to the thousands who were still homeless more than a year after Super Typhoon Yolanda rampaged through communities in the Visayas and robbed many families of their loved ones as well as their homes.

No time to grieve for kin

FOR SOMEONE just hearing the stories, they sound like episode after episode of the “Walking Dead” TV series. But what Jermaine Bayas and other aid workers witnessed in Tacloban in the Yolanda aftermath was stark reality.