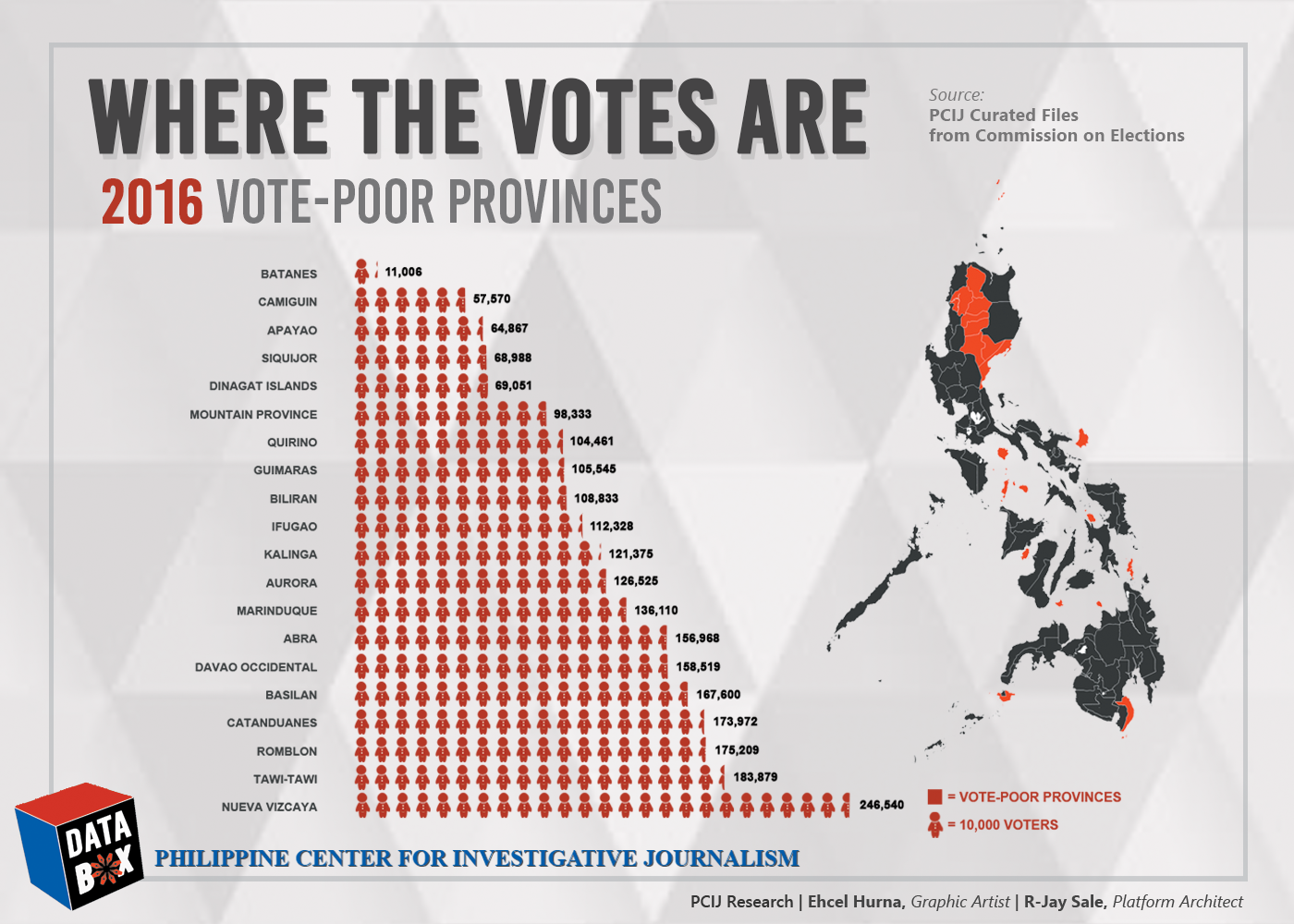 VOTES BY THE PINT

But that momentary attention may not mean a boost to the province’s revenues after the polls. In fact, among the consistent placers in the list of 20 provinces with the least number of registered voters from 2004 to 2016, only one has been classified as second-class in terms of income. The rest ranked third-class and below.

PCIJ curated the Commission on Elections’ voter-statistics data to come up with a list of 20 provinces with the least number of registered voters from 2004 to 2016.

Of these, three provinces were fifth-class in income: Batanes, Camiguin, and Siquijor.
Four – Mountain Province, Guimaras, Biliran, and Marinduque – apparently made just enough to make it to fourth-class level.

The rest were classified under the third income class, except for Nueva Vizcaya, which was considered second-class in the 2015 listing of Bureau of Local Government Finance.

Unsurprisingly, Batanes has been on top of the list of provinces with the least number of registered voters since 2004. During that year, it had only around 8,800.

For the upcoming elections, 12 provinces in the vote-poor roster are from Luzon (Batanes, Apayao, Quirino, Mountain Province, Ifugao, Aurora, Kalinga, Marinduque, Catanduanes, Abra, Romblon, and Nueva Vizcaya); three are from the Visayas (Siquijor, Guimaras, and Biliran), and five are from Mindanao (Camiguin, Dinagat Islands, Tawi-Tawi, Davao Occidental, and Basilan).

The list has had more provinces from Luzon through the years. In 2004, 13 of the provinces in the vote-poor tally were also from Luzon (Batanes, Apayao, Quirino, Mountain Province, Ifugao, Aurora, Kalinga, Marinduque, Catanduanes, Abra, Romblon, Occidental Mindoro, and Nueva Vizcaya), while four were from the Visayas (Siquijor, Guimaras, Biliran, and Southern Leyte), and three from Mindanao (Camiguin, Tawi-Tawi, and Basilan). 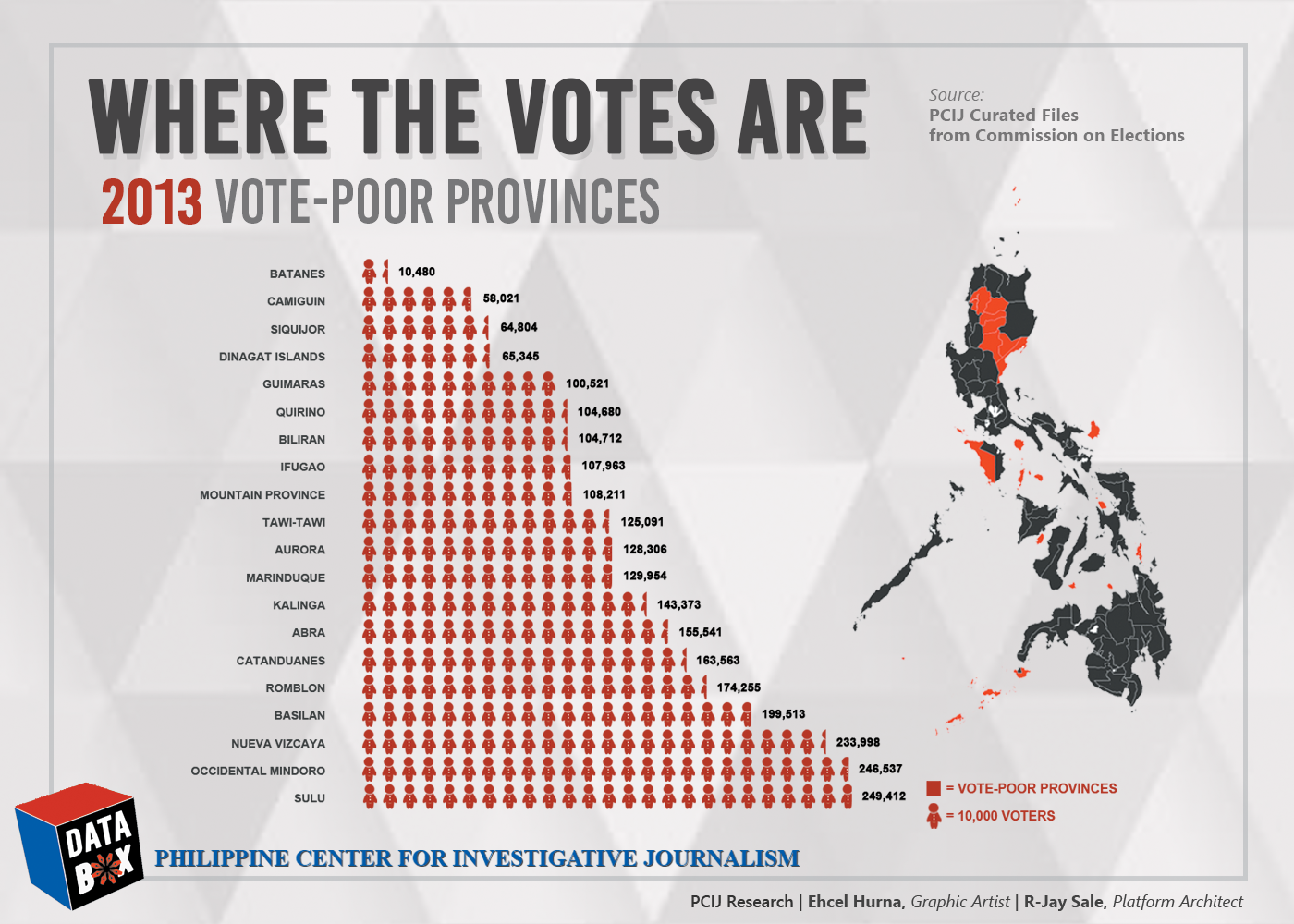 Little movement can be seen in the roster, with even the same provinces appearing on it in 2007 and 2010.

In 2007, though, Dinagat Islands debuted on the list at fifth place, edging out Southern Leyte. But then Dinagat was declared a province only in 2006, by virtue of Republic Act No. 9355.

Camiguin also jumped from fourth place during the previous election to second place in 2007.

Apayao, meanwhile, has consistently made it to the magic five except in 2013 due to unavailability of data for the province in that election year. With the absence of Apayao on the list, Sulu managed to snatch the last spot on the bottom 20 in 2013.

Occidental Mindoro, Davao Occidental, and Southern Leyte have also been part of the list in non-consecutive instances. 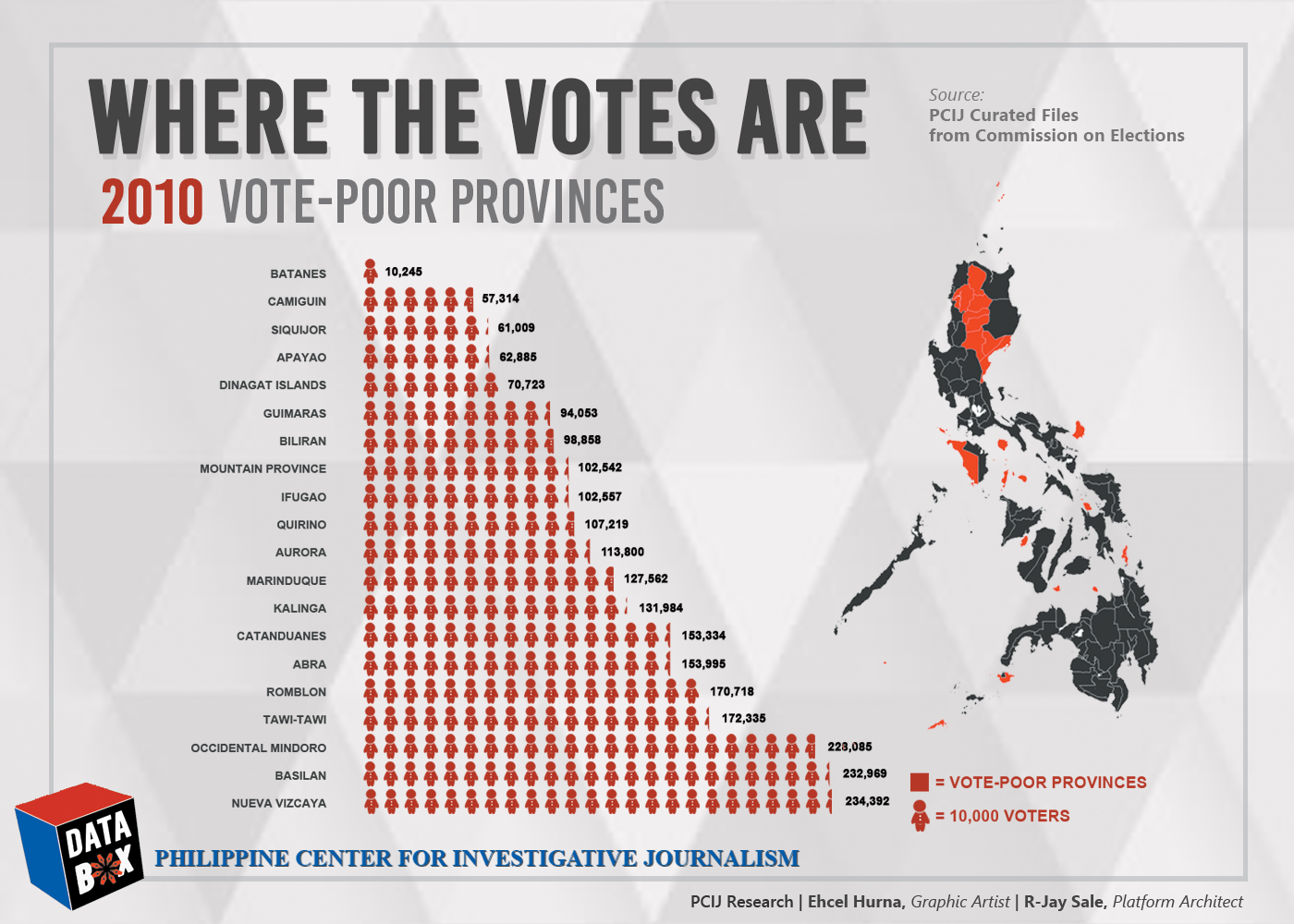 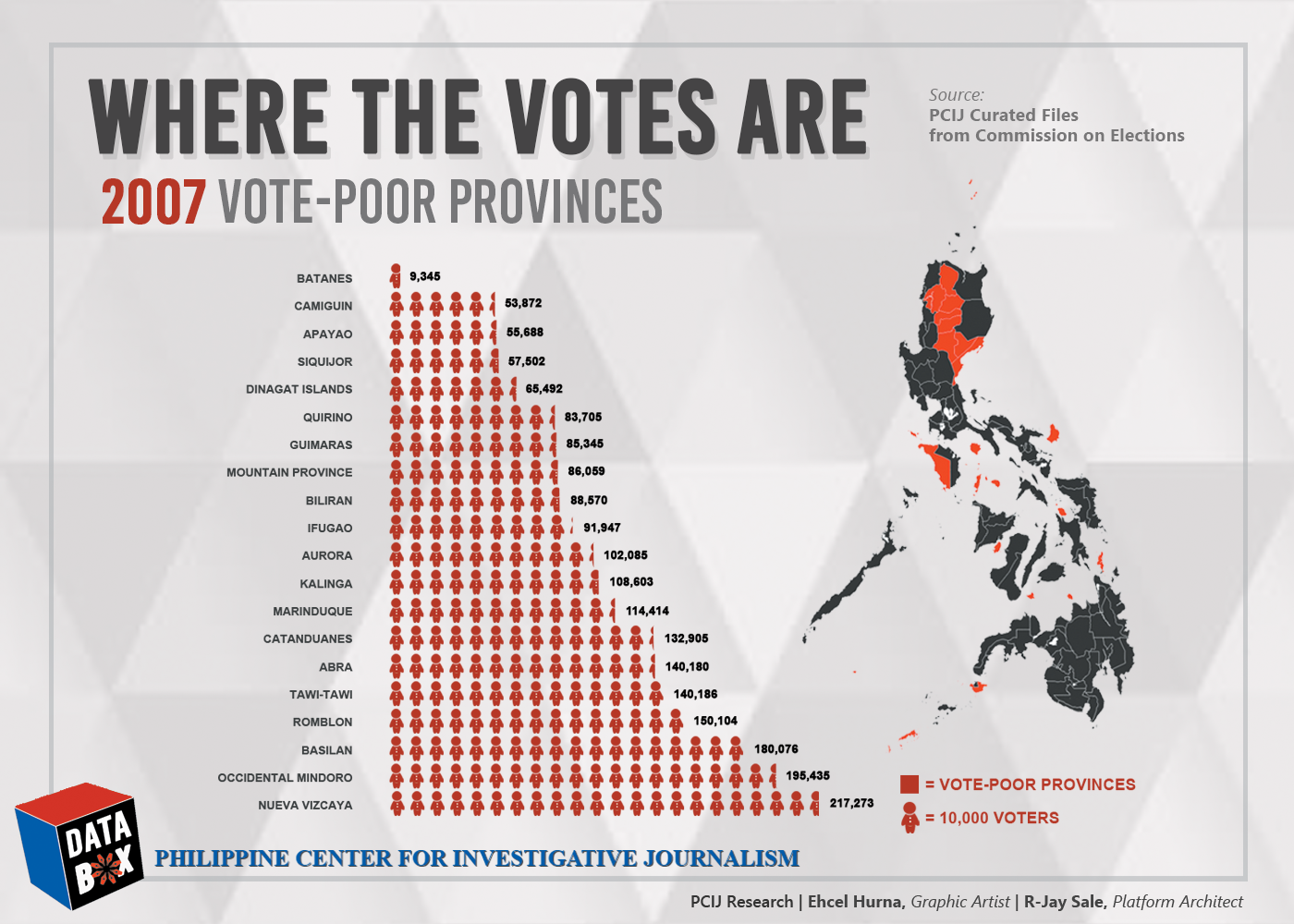 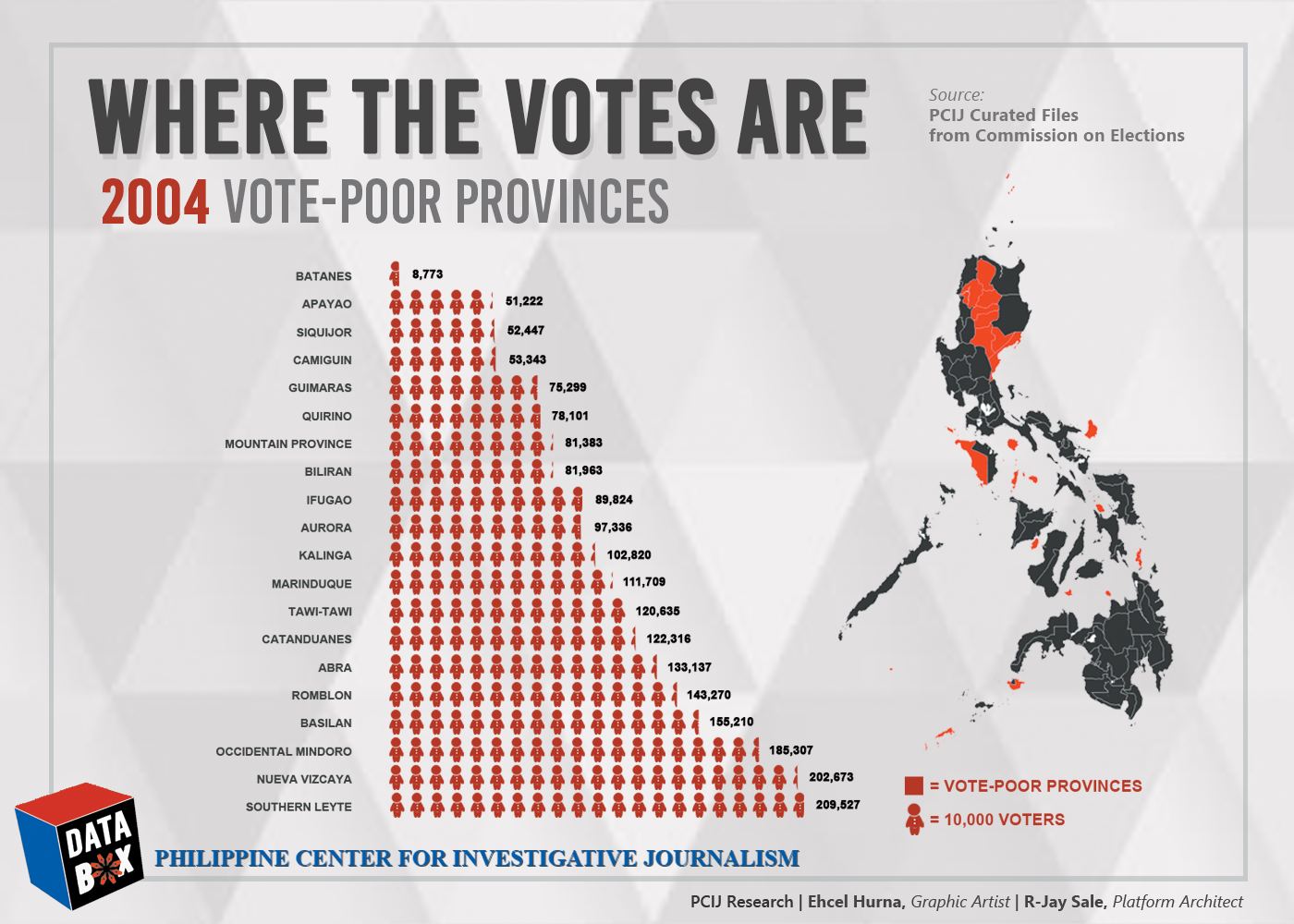