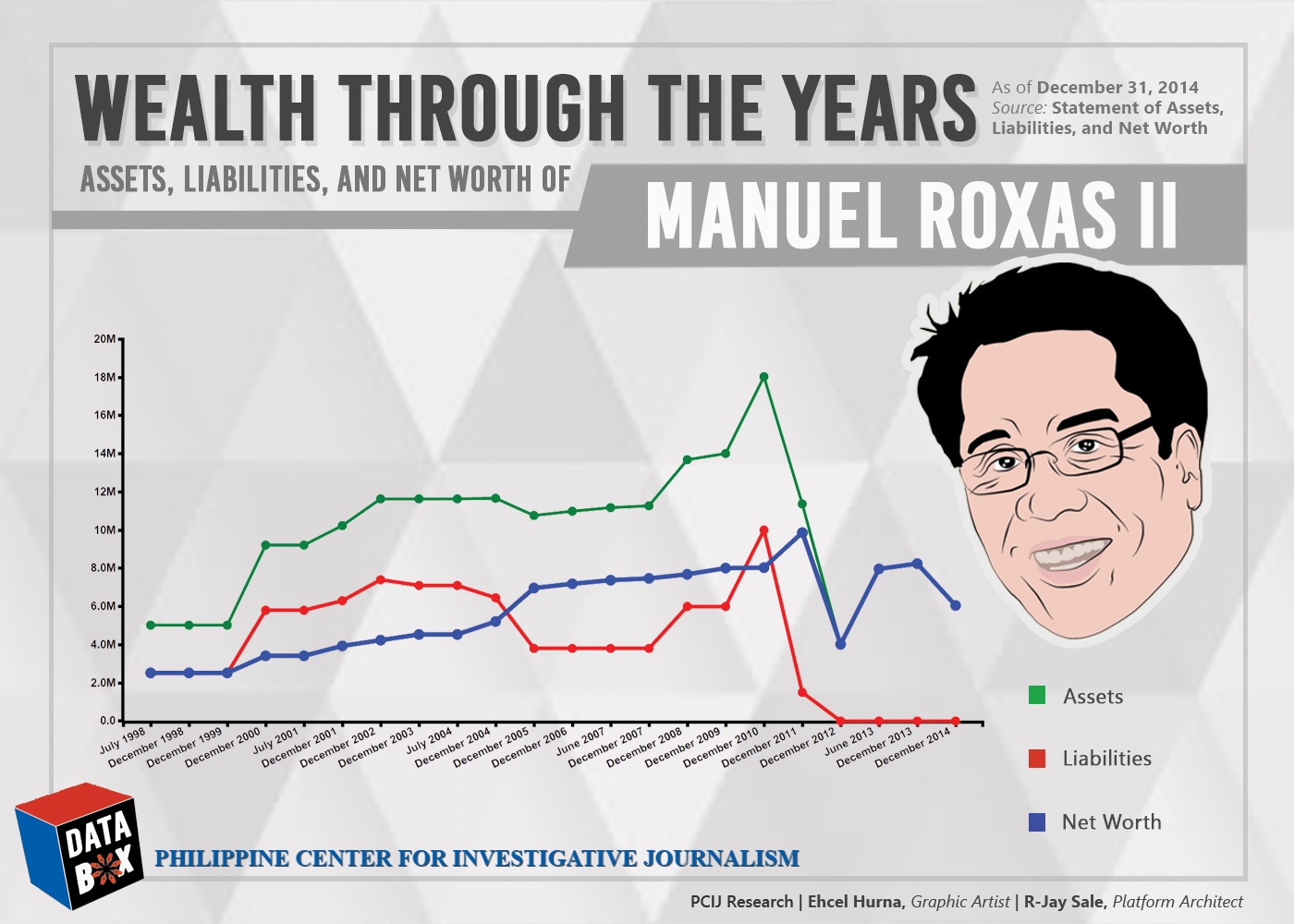 A latecomer in politics, Roxas used to work as a fund manager in New York and travelled between Manila and the United States from 1986 to 1992. He finally decided to settle in the country after his younger brother Gerardo ‘Dinggoy’Roxas Jr., then Capiz’s 1st District Representative in Congress, died of colon cancer in 1993 at age 33.

Dinggoy’s death got Mar started in politics. Mar ran and won in the special election conducted to choose Dinggoy’s replacement, was voted congressman again from 1995 to 1998, and senator from 2004 to 2009.

Between periods, he served as Cabinet secretary to three Presidents: as Trade and Industry Secretary to Joseph Estrada and Gloria Macapagal Arroyo (1998-2002), and as Transportation and Communications and later Interior and Local Government Secretary to Benigno S. Aquino III (2011-October 2015).

Roxas’s SALN for 1995 showed his effective net worth to be P23.4 million (none indicated in real properties, P25.9 million in personal and other properties, and P2.4 million in liabilities). He did not add the amounts in his 1995 filing.

In 1996, however, Roxas enrolled P24.67 million in liabilities, the same value for his real properties, and slightly more or P35.91 million in personal and other properties. The net worth that results is a much lower P35.02 million a year later.

His net worth reached its peak in 2011, a year after he lost the vice presidential race to Jejomar Binay in 2010. This was when Roxas declared a net worth of P183.1 million consisting of P86.44 million in real properties, P174.14 million in personal and other properties, and also P77.48 million in liabilities.

Roxas’s latest SALN for 2014 reflected a lower value of P81.24 million for real properties, but bigger values for personal and other properties (P202.71 million), and a bigger loans portfolio of P81.22 million.

Of the six candidates for president, Roxas is the most connected to a web of business and financial interests inherited and acquired from as far back as the ’80s. The Araneta and Roxas families have vast land and properties, as well as investments in agriculture, real estate, property leasing and development, and mining.

In 2014 SALN, Roxas declared that he has stocks or membership shares in, or has been a shareholder or incorporator of 32 various business entities. These are:

In his first available SALN for the year 1993, Roxas had declared business interest in only five entities, all family-owned. These are:

For 2009, the year before he ran and lost the race for the vice presidency to Binay, Roxas’s declared net worth was P62.93 million — assets of P124.63 million (including real properties of P25.96 million and personal properties of P98.66 million), minus liabilities of P61.70 million.

He took a year-long leave of absence from public office but when he returned in 2011 to serve as President Aquino’s Transportation and Communication secretary, Roxas’s wealth also made a virtual comeback. For the year 2011, Roxas declared a net worth of P183.10 million — assets of P260.58 million (including P86.44 million in real properties and P174.14 million in personal properties) and liabilities of P77.47 million.

But the year his wealth shone the brightest was in 2013, even as Roxas, by then the Interior and Local Government secretary, was swamped with work assisting typhoon, earthquake, and other victims of calamities, man-made and natural.