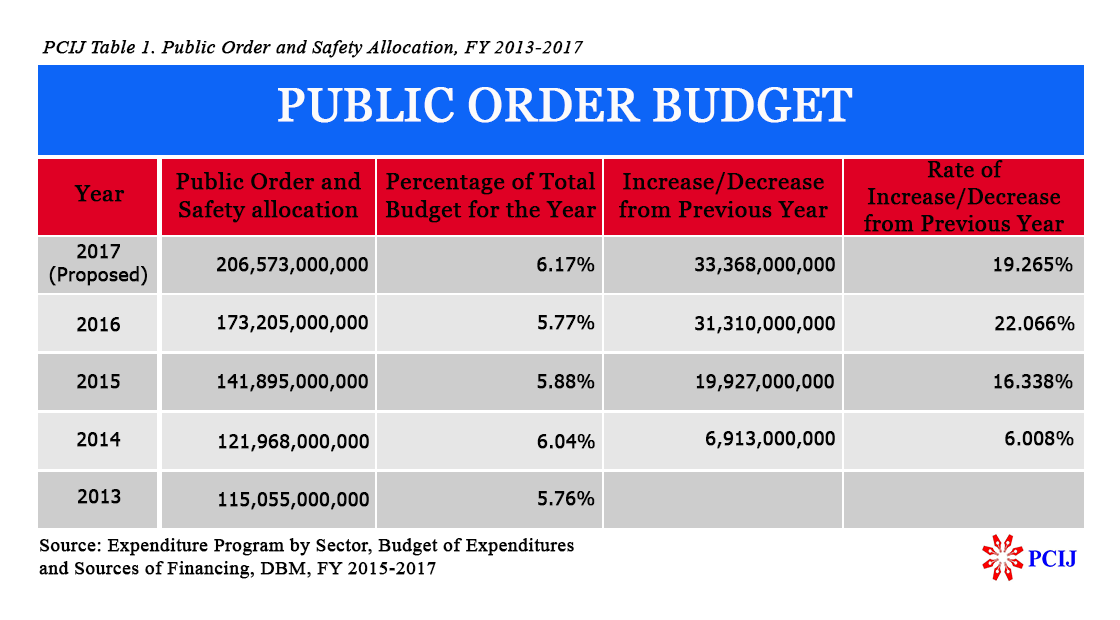 As in previous years, social services and economic services will get the biggest slices, at 40.14 percent and 27.58 percent, respectively. Only debt-service interest shows a substantial reduction, from 13.09 percent of the total budget in 2016 to 10 percent of the proposed 2017 budget.

But with President Rodrigo R. Duterte saying in his budget message that “real development cannot be achieved if our people do not feel safe and secure,” it could only be expected for agencies entrusted of the country’s public order and safety to have beefed-up proposed budgets. These include the Department of Justice, Department of the Interior and Local Government, Department of National Defense, the Judiciary, and the Office of the Ombudsman, all of which have projected increases for next year.

At least three agencies directly involved in the Duterte administration’s current war on drugs – the Philippine National Police (PNP), the Philippine Drug Enforcement Agency (PDEA), and the Dangerous Drugs Board (DDB) – also have proposed budget hikes in 2017. But these have not exactly been drastic and have only been consistent with the increases they obtained in previous years. Too, each agency’s performance targets have almost remained the same, with some bearing similar goals as in 2016 and 2015.

The 2017 budget proposal uses performance information to guide fund allocation. This means each program, activity, and project that the government will fund is linked to major final outputs that departments and agencies must deliver according to their mandates. Begun in 2014, this “performance-informed budgeting” approach aims to ensure that each peso in the budget corresponds to results that agencies must achieve.

A lot more for PNP

For instance, the 2017 National Expenditure Program shows that PNP’s key strategy is to improve safety in the community. To measure the police’s performance in achieving this goal, the PNP has set targets for three performance indicators. For 2017, it aims to reach 66-percent feeling of safety in the National Safety Index, a five-percent reduction in the National Index Crime Rate, and a five-percent increase in Crime Solution Efficiency.

Except for an increase in the number of crime investigations taken, PNP’s goals for 2017 mirror the targets it set in 2015 and 2016.

The difference is PNP gets more funding next year. From P88.6 billion in 2016, President Duterte proposed P110.4 billion for the police in 2017. Nearly 25 percent higher than its budget this year, the additional funding for PNP will be used “to hire more policemen, buy more guns and patrol vehicles, and finance other activities for more effective crime suppression.”

PDEA, the lead agency in the fight against illegal drugs, will also get more funds in 2017 after experiencing a budget cut this year. Higher by 20 percent, PDEA’s proposed budget next year is P1.22 billion.

PDEA’s key strategy is to “eliminate the supply and demand of illegal drugs through effective and efficient drug law enforcement.” To achieve this, PDEA’s main output is to reduce and suppress the supply of dangerous drugs.

While PDEA does aim for a slightly higher percentage of high-impact operations successfully conducted, as well as an increase in the average percentage of drug-related information and reports acted within one hour, its number of “high-value targets arrested and charged” vis-a-vis number of “arrested drug personalities” per semester stayed at 50 percent.

DDB meanwhile has been aiming to reduce the number of drug users in the country by a modest two percent annually for a few years now. Based on its own estimates, it seems to have been meeting that challenge, resulting in a decrease in the number of “dangerous drug users” in the last three years.

By comparison, DDB’s targets for its major final outputs have increased — but only slightly in most respects. In 2016, the board planned to formulate 459 regulations, issuances, and policies. The number is now up to 584 for 2017.

But what about President Duterte’s oft-repeated promise to raise the salaries or “base pay” of military and uniformed personnel? Because the budget is already set for 2016, the government is constrained to spend only on items identified in the General Appropriations Act. In other words, military and uniformed personnel cannot expect an increase in their paychecks this year. What they could look forward to are possible increases in allowances, a matter studied and submitted for approval by the Department of Budget and Management (DBM) to the President.

Once approved, the President will issue an executive order granting increase in the “collateral allowances” of military and uniformed personnel. These are allowances attached to their activity like combat and hazard pay.

The money to be used for the allowance increase, if approved, will come from the balance of the Miscellaneous Personnel Benefits Fund (MPBF) in the 2016 budget. A total of P96 billion is allotted for personal services under MPBF this year.

The MPBF is one of three sources of money paid to government personnel. The other two are the budgets lodged under each agency and the Pension and Gratuity Fund. Under Special Provision No. 1, the MPBF may be used for “deficiencies in authorized salaries, bonuses, allowances, associated premiums and other similar personnel benefits of national government personnel.

For 2017 and the two years following it, a draft joint resolution increasing the base pay and allowances of military and uniformed personnel is pending approval from the Office of the President. Once given the go, the joint resolution will trigger a three-tranche implementation of increases in the salaries and allowances of the military and uniformed personnel. For 2017, the proposed amount that will also be taken from the MPBF is P39.5 billion, P41 billion for 2018, and P42 billion for 2019.

From BUB to pay hike

A DBM official says the allocation for MPBF will likely increase although the money for the pay hikes will also be taken from the funds that would have been used on projects that are now discontinued, like the bottom-up budgeting program or BUB. BUB is an approach to formulating the budget proposal of agencies, taking into account the needs of poor cities and municipalities.

DBM has also proposed “rightsizing” or the reorganization of the bureaucracy, which means doing away with redundant positions to streamline organizational structures.

This year, the pension budget amounts to P71 billion. DBM says pension requirements for military personnel have already surpassed the amount allotted for active personnel. The same is about to happen for police personnel.

War on drugs: No EO signed
by DU30, a chaos of numbers

MORE THAN 20 years ago, Davao City was turned into the laboratory for its then Mayor Rodrigo R. Duterte’s war against illegal drugs. Now that he is President, Duterte has mounted a reprise of that war across the nation, saying that he is ready to put his honor, life, and presidency on the line for it.

HE RANTS and rails against the drug menace nearly every day, and sometimes, morning, noon, and night time, but always only in press conferences of public events.

The making of Rodrigo Duterte

IN THE PHILIPPINES, the end of Ferdinand Marcos’s 20-year dictatorship in 1986 was a tumultuous time. The new government of Corazon Aquino was being challenged on all fronts: from the Right, by ambitious military factions plotting coups; from the Left, by peasant guerrillas and angry protesters demanding radical reforms. In those days, I was working as a journalist in Manila, finally able to cover the country’s problems with corruption, crime, economic stagnation, and insurgency without fear of censors.