THEIR TASKS have never really been easy, but President Rodrigo R. Duterte’s war on drugs has most probably made their life much more toxic.

THEIR TASKS have never really been easy, but President Rodrigo R. Duterte’s war on drugs has most probably made their life much more toxic.

Aside from their regular duties, they are now expected to run after “ninja cops” or coddlers of drug syndicates, as well as investigate the cases of violent deaths that keep on multiplying each day as a result of the government’s current anti-drugs campaign.

The first task belongs to the Philippine National Police’s Internal Affairs Service or IAS that calls itself “the watchdog to the PNP” in its official Facebook page. The IAS is a unit directly under the command of the PNP chief, Director General Ronald ‘Bato’ de la Rosa.

The second task belongs to the PNP Crime Laboratory Office’s Scene of Crime Operatives (SOCO). The SOCO is just one of 12 “operational support units” of the PNP.

In IAS’s case, the focus of investigation includes several hundred police officers who have supposedly been linked to the illegal-drug trade.

For SOCO, its tasks now include about 2,400 so-called “deaths under investigation” or DUI on account of drugs and other crimes, but by police protocol, all cases of violent deaths.

In the 150,000-strong police force, there are only 680 SOCO personnel and 664 IAS personnel. Between them thus, IAS and SOCO have only 1,344 personnel across the nation’s 18 administrative regions.

What bad cops do

To be sure, under the so-called “Internal Cleansing” program of the PNP, the IAS and SOCO should not lack for supporters among the top brass of the force. That seems to be the case, at least by the text of the latest PNP advisory on the ongoing war on drugs.

The circular sought the “creation of the PNP Internal Cleansing (sic) at the national level… headed by the Director for Intelligence Group” with support from IAS and nine other PNP headquarter units. That body will supposedly be replicated at the regional, district, and provincial commands of the PNP.

According to the circular, “Internal Cleansing is the arrest and prosecution of PNP personnel through the conduct of counter-intelligence operations, who are engaged in unlawful activities such as but not limited to illegal arrest, illegal detention, hulidap, bangketa/areglo or case-fixing, recycling of confiscated drugs and planting of evidence, bungling of drug cases, or acting as protectors, coddlers, financiers of drug personalities.”

“It also includes,” said the circular, “the continous (sic) drug testing of all PNP personnel and filing of appropriate charges against those who will be found positive in order to ensure drug-free workplaces in all PNP Offices and further improve the image and credibility of the police in the anti-drug campaign.”

As of the latest news reports, various PNP officers have said that only 141 officers have tested positive for drugs while up to 300 officers have been tagged as coddlers of drug syndicates.

But the PNP has been mostly mum about the more important details, including the actual number of “ninja cops,” how many exist in the force, how many cases have been filed, and what actions or sanctions have been taken against them by the PNP command.

Meanwhile, not a few families of those who had been killed in the drug war have blamed unnamed police officers as the main operators of the illegal-drug trade in their communities. These “ninja cops” are supposedly going after their runners and assets who might blow the whistle on their operations.

PCIJ asked de la Rosa about this in an interview last July. His remark: “You cannot take that away from us, a suspecting public. ‘Pag ang public ay nag-suspetya sa kanyang pulis, hindi mo maiwasan ‘yan (When it’s the public who becomes suspicious of the police, you can’t avoid that).”

Then again, “negligible” is relative; even a small number may become troublesome if one has just a few hands on deck and limited time and resources.

From receipt of case folders, IAS is supposed to resolve within 90 days the complaint or complaints filed against law enforcers.

Cases handled by SOCO teams meanwhile have no aging or deadlines, even as they must preserve the evidence in their custody for as long as these are required in court or by other investigating bodies.

The standard SOCO team, for instance, consists of at least seven persons, each assigned to a specific task:

This is the ideal set-up. In reality, or at least based on data from the PNP National Headquarters, there are far too few SOCO personnel than what is needed to organize a full-fledged team for each of the regions of the country.

At the PNP National Headquarters, there are only 40 multi-skilled SOCO personnel performing multiple tasks under the PNP’s Crime Laboratory Office. They include:

The National Capital Region Police Office (NCRPO) has just a handful of skeletal SOCO teams, even as the largest number of drug deaths has been recorded in Metro Manila.

The Northern Police District-Crime Laboratory Office has two five-person SOCO Teams at its Caloocan City headquarters. Too, there are two three-person teams and two more two-person teams assigned to its satellite offices in Caloocan City and Valenzuela City.

The Manila Police District-Crime Laboratory Office has three SOCO teams with four members each, and three officers working for all the three teams.

The Southern Police District-Crime Laboratory Office has three four-person SOCO teams, one other with three members, and a “Reserved Team” with five members.

The Eastern Police District-Crime Laboratory office has only two SOCO teams —
one with five members, and the other with six.

The IAS, for its part, is no better than SOCO when it comes to its available pairs of hands. 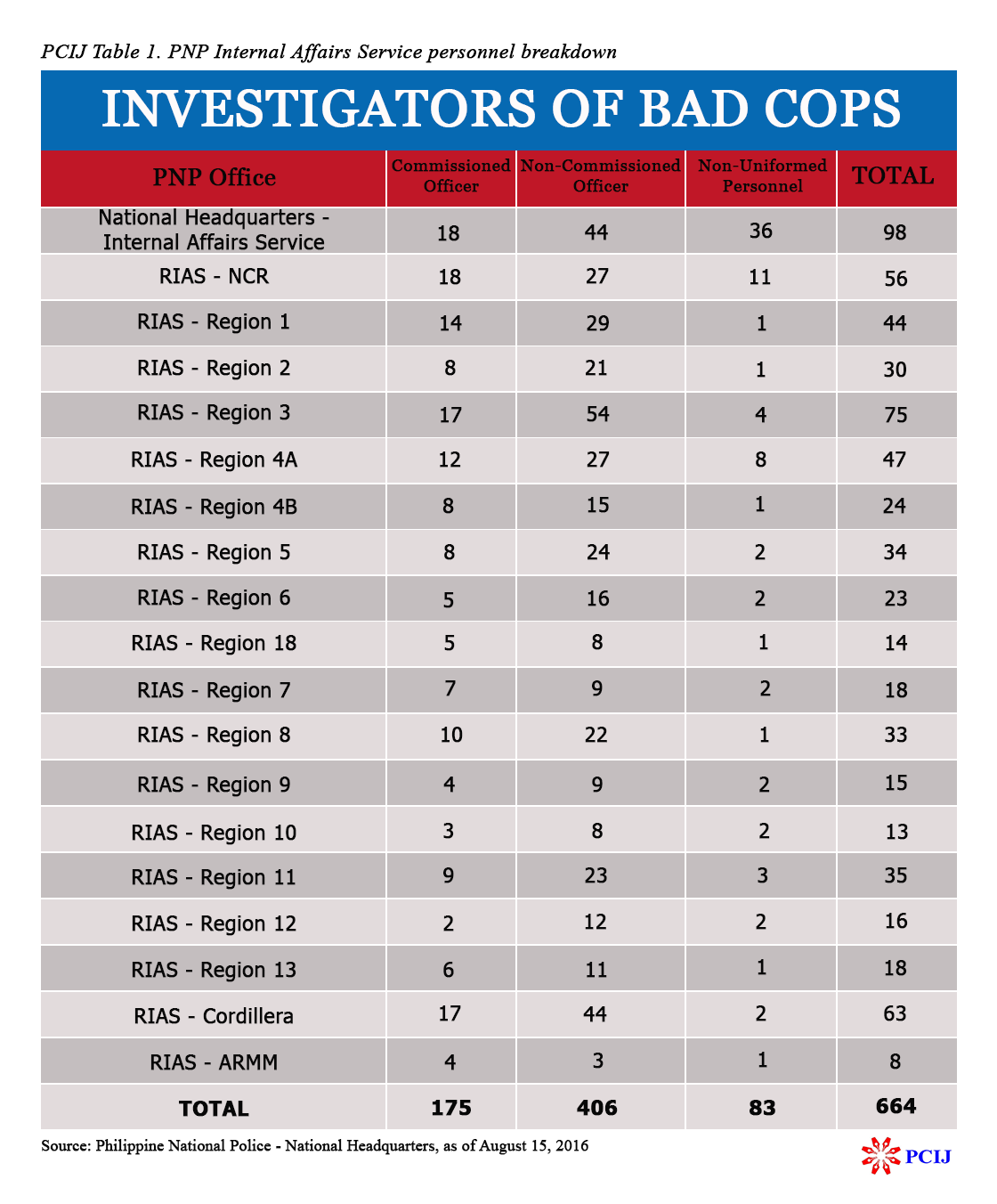 Just how capable the IAS and SOCO are in regard to their tasks of investigating erring cops and erroneous deeds of cops is a concern that lingers, partly because of their slim teams. Yet another concern, however, is how independent they are – especially the IAS – of the very agency whose members they are scrutinizing.

Republic Act No. 8551 or “The PNP Reform and Reorganization Act of 1998″ created the Internal Affairs Service to serve “a truly independent and impartial body, manned by God-centered and professional officers.” Its mandate in law is “to instill police discipline, enhance the delivery of police service, and dispense service.”

But that has yet to happen. Even today, a PNP officer, Chief Supt. Leo Angelo Leuterio, heads IAS.

Pressed by Poe at a recent Senate hearing why the PNP has not designated a civilian head at IAS, PNP chief de la Rosa replied: “As of now, I find it necessary to maintain a police officer as the head of the IAS because a lot of police officers and senior police officers are involved in illegal drug trade. If I put a civilian head in the IAS, madaling i-threaten ang civilian, baka hindi makalaban sa pulis na scalawag.”

He added that in his mind, “I find it necessary to maintain that a police officer as head of IAS, he is capable to thwart any threat offered by these scalawag police officers.”

Presidents before Duterte had not complied as well with the law, de la Rosa noted. “’Yung nakaraang administrasyon hindi nila pinalitan ng sibilyan ang IAS head,” he said. “Kaya umaasa kami, we remain hopeful that in this new administration, it will be [as] such.”

Beyond the IAS’s domain, however, many more police officers remain respondents in graft and other criminal complaints pending before the Sandiganbayan.

The PNP in fact accounts for the second highest number of cases before the Ombudsman during each of the same three years, next only to local government units.

HAVING HAILED Executive Order No. 2 (s. 2016), operationalizing for the Executive branch the people’s constitutional right to information, as a major step forward, the Right to Know, Right Now! Coalition (R2RKN) committed to engage processes related to it, and launched a new round of FOI practice centered on its implementation. This report covers the review of agency compliance with the EO’s mandate for a People’s FOI Manual, and an assessment of agency action on requests filed after EO No. 2 took effect.

TWO YEARS AGO, the existence of the “Davao Death Squad” or DDS was enrolled and confirmed in the dockets of the Supreme Court of the Philippines.