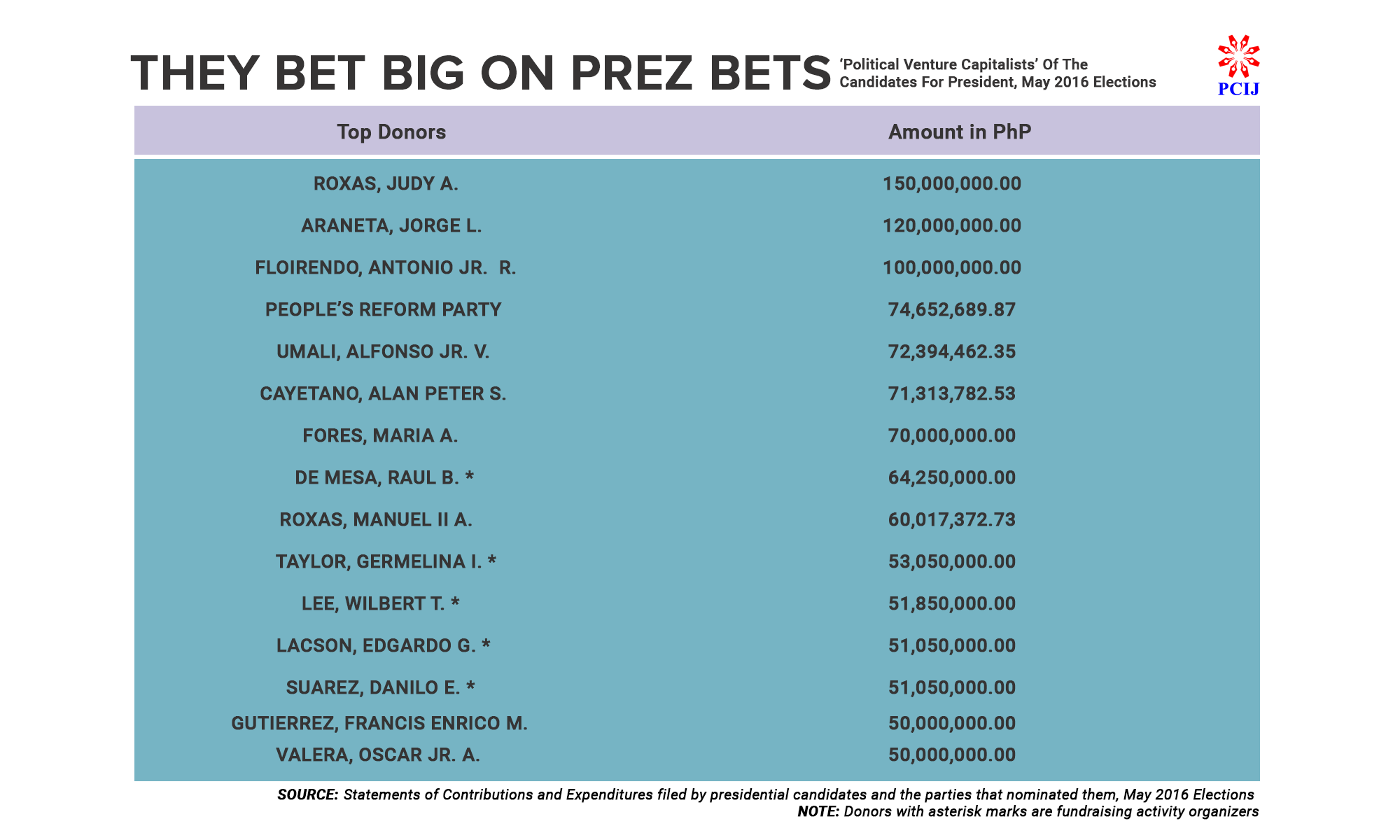 CAMPAIGN FINANCE AND THE 2016 ELECTIONS

IN 2010, PCIJ reported that only 308 donors contributed in the presidential race that Benigno Aquino III won. In the last presidential elections, where Rodrigo R. Duterte emerged as victor, that number has shot up to 830.

IN 2010, PCIJ reported that only 308 donors contributed in the presidential race that Benigno Aquino III won. In the last presidential elections, where Rodrigo R. Duterte emerged as victor, that number has shot up to 830.

Then again, there were nearly 56 million registered voters when the May 2016 elections took place, which makes that figure for total donors to the candidates for president minute in comparison.

Too, 80 percent of the total amount raised for the presidential race came from Metro Manila, making the National Capital Region the fundraising heart of the polls.

If all those numbers haven’t made your head spin yet, here are more:

• Of the total P2.44 billion raised for the presidential candidates and their parties, 83 percent or P2.02 billion came from just 105 people who each gave P5 million and above.

All these boil down to a couple of facts: While more people donated in this year’s presidential elections, a significant portion of the contributions, just like in 2010, still came from far too few individuals. Nearly seven out of 10 of those donors were also based in one region, Metro Manila.

* In 2010: Venture capitalists or true believers? Only 308 donors funded campaign for presidency 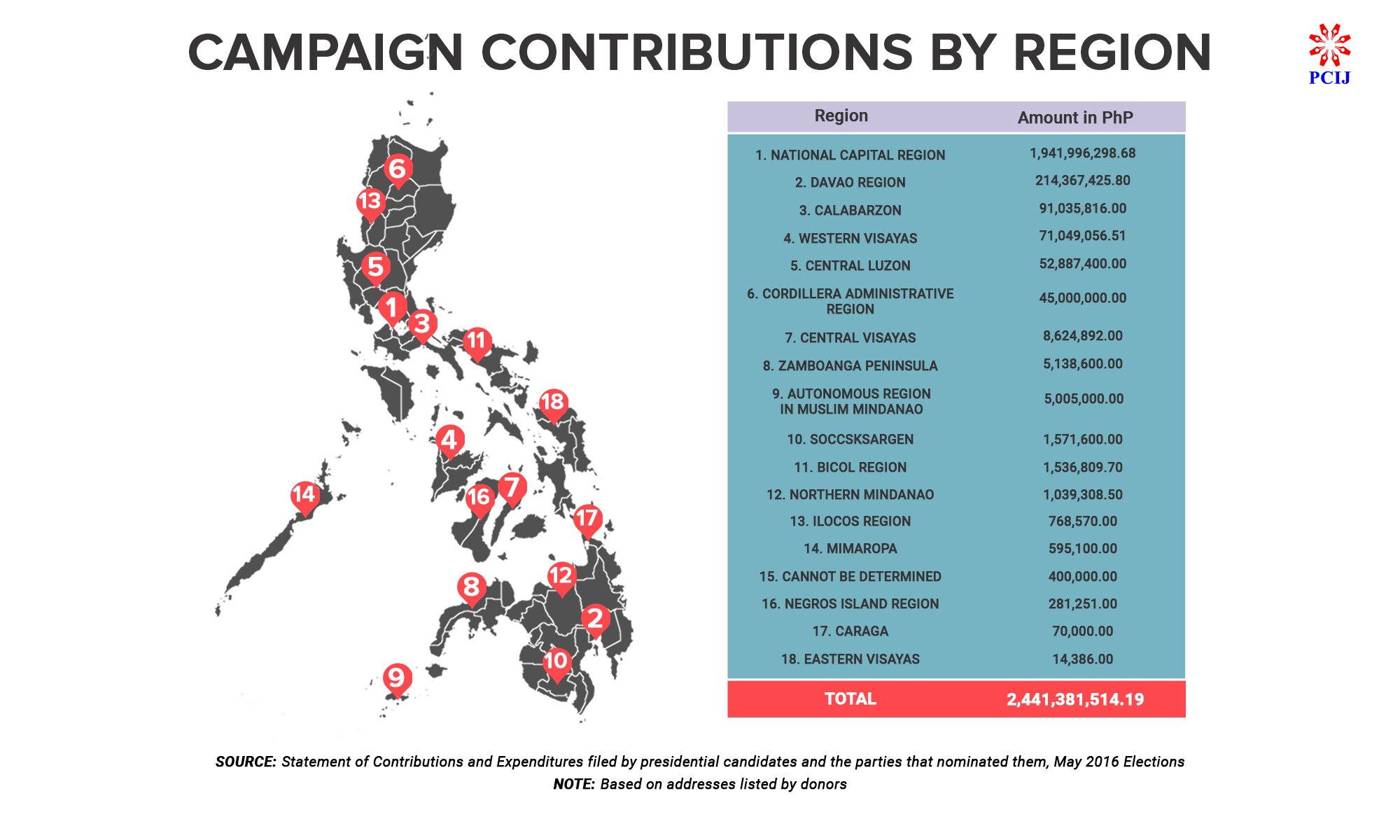 “When we’re talking of elections as a democratic exercise, you want to involve people, you want more voices to be heard,” comments Rona Ann V. Caritos, executive director of the Legal Network for Truthful Elections (LENTE). “But when 10 or 15 individuals determine how much a candidate gets and if that candidate wins, we all know that the candidate will likely listen first to the top 10 or 15 individuals who gave donations to his campaign.”

“The elections are supposed to be a reflection of the will of the people,” Eric Jude O. Alvia, secretary general of election watchdog National Citizens’ Movement for Free Elections (NAMFREL), also says. “But apparently because of the current situation right now. It’s looked at a cynical manner. Elections are a process in harnessing efficiently one’s resources to gain public office.”

According to Alvia, candidates are likely to get big donors because of the current structure of the campaign, where there is no limit on the amount a donor can give.

NAMFREL national council member Damaso Magbual adds that essentially, it’s the candidate who is approaching potential donors. The practice, he says, is unlike the system in the United States where people could go online and contribute.

But Alvia says that there are innovative ways that can be introduced to democratize contributions. He recalls that years ago, to raise funds for the senatorial candidacy of prominent human-rights lawyer Rene Saguisag, he used to help sell Saguisag dolls for P50 to P200 each. The dolls, he says, were a way for the candidate to get donations from voters who did not have deep pockets. 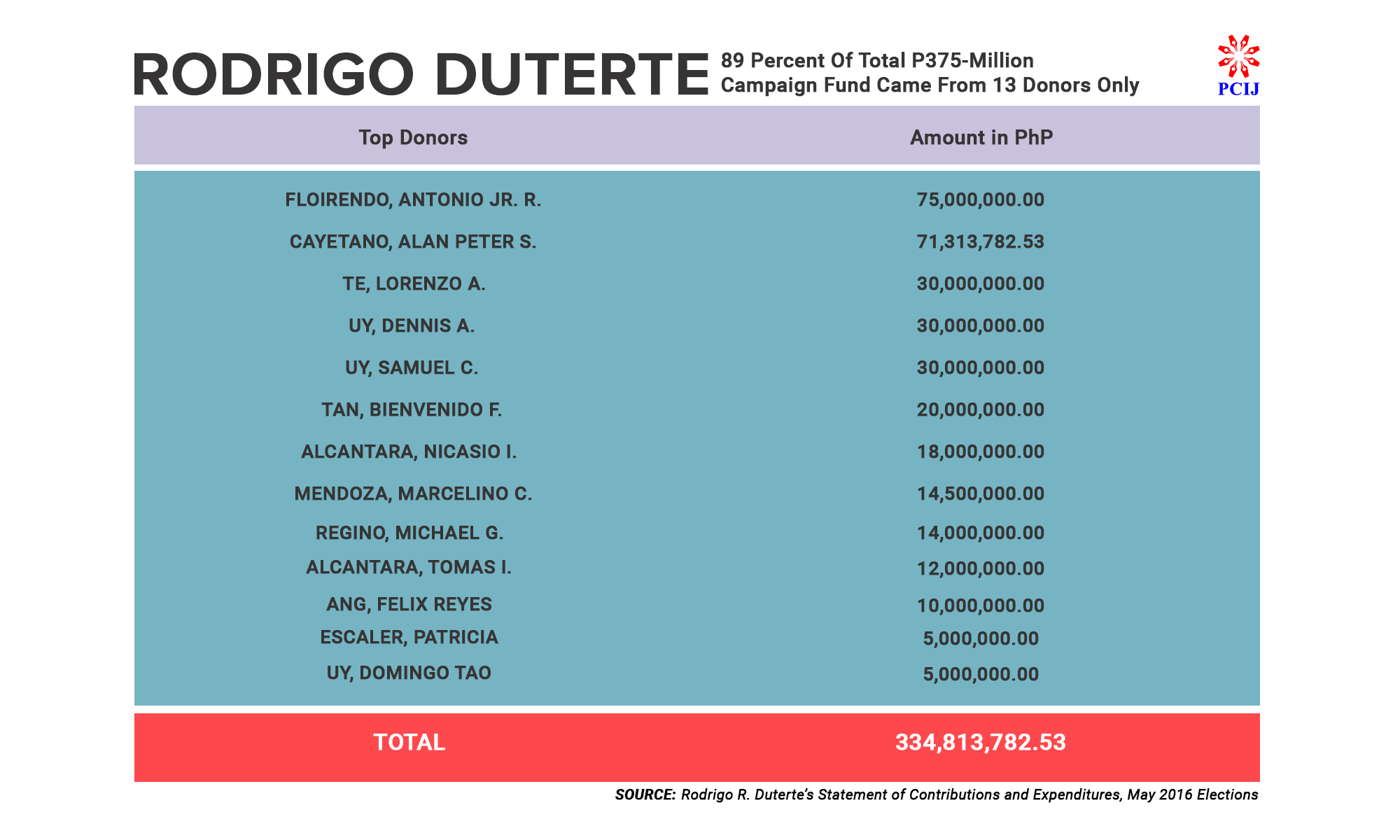 In any case 89 percent of the P375-million campaign kitty of now-President Duterte came from just 13 donors. This is based on Duterte’s Statement of Contributions and Expenditures (SOCE), in which he also reports having 135 donors. The highest single donation he received was P75 million, the lowest P576. But contributions amounting to P10,000 and below reached a total of only P175,313, which is not even half of one percent of his campaign funds.

Too, while Duterte’s donors were mostly from Davao, their contributions made up only half — P189 million — of his total campaign fund. Some P183 million or nearly the same amount came from donors who listed their addresses in Metro Manila. The rest or P2.7 million came in fairly small amounts from various other regions.

Duterte’s party, Partido Demokratiko Pilipino – Lakas ng Bayan (PDP-Laban), also got 77 percent of its money from Metro Manila-based donors. Contributions from just seven of its biggest donors made up 86 percent of its total election fund. 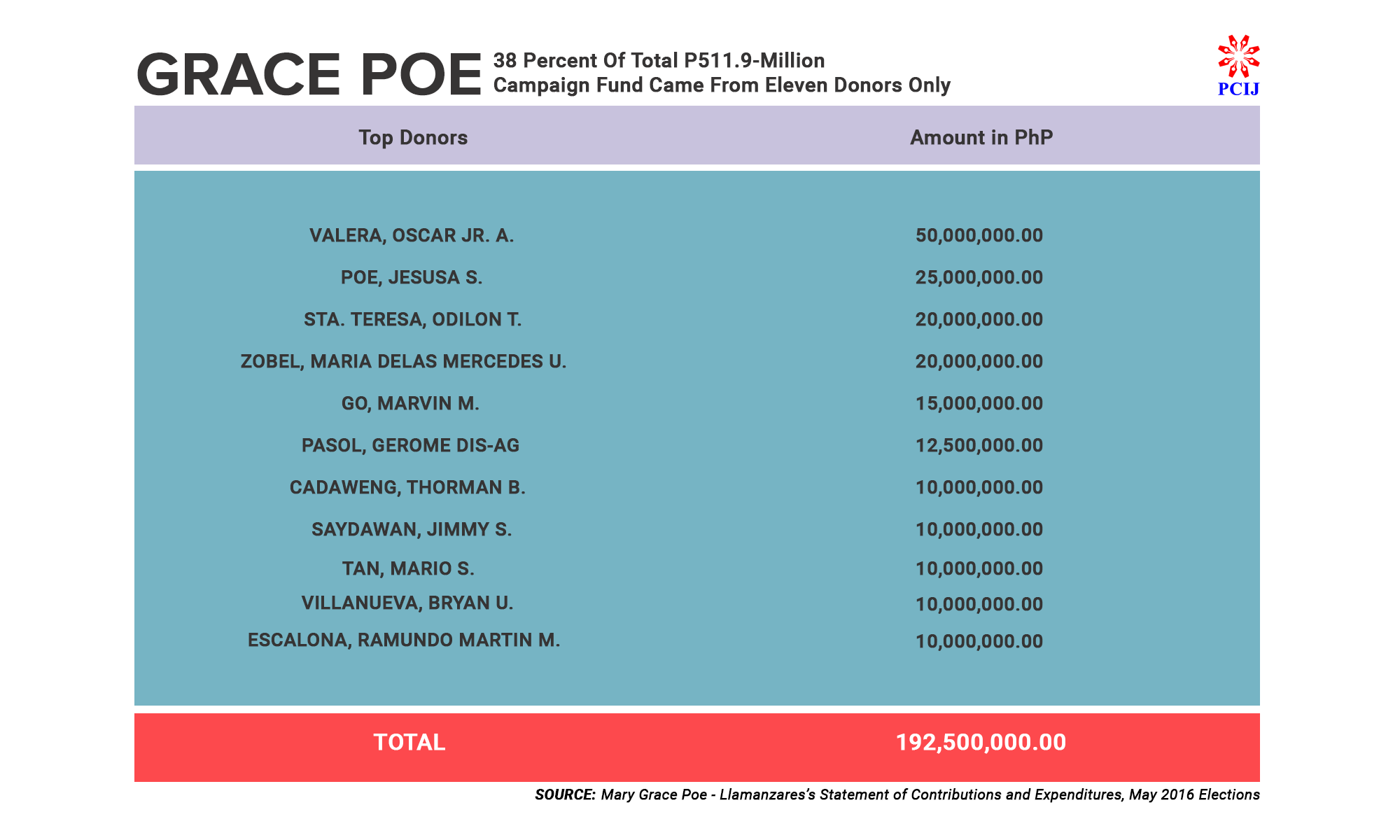 Duterte, however, did not have the fattest campaign coffer among the presidential candidates (at least based on documents they submitted to the Commission on Elections). His was actually the next to the leanest one.

It was Senator Grace Poe who reported to have received the highest total amount, which reached P511.9 million. That sum, though, was spread out across more donors, compared to the other candidates. Running as an independent, Poe had the second most number of donors (235) among the presidentiables. But contributions from her 10 biggest donors made up only 38 percent of her total campaign funds, unlike those of the rest of the candidates.

Still, like three of the other presidentiables, Poe received majority of her campaign donations – P382 million or 74 percent – from individuals living in Metro Manila. 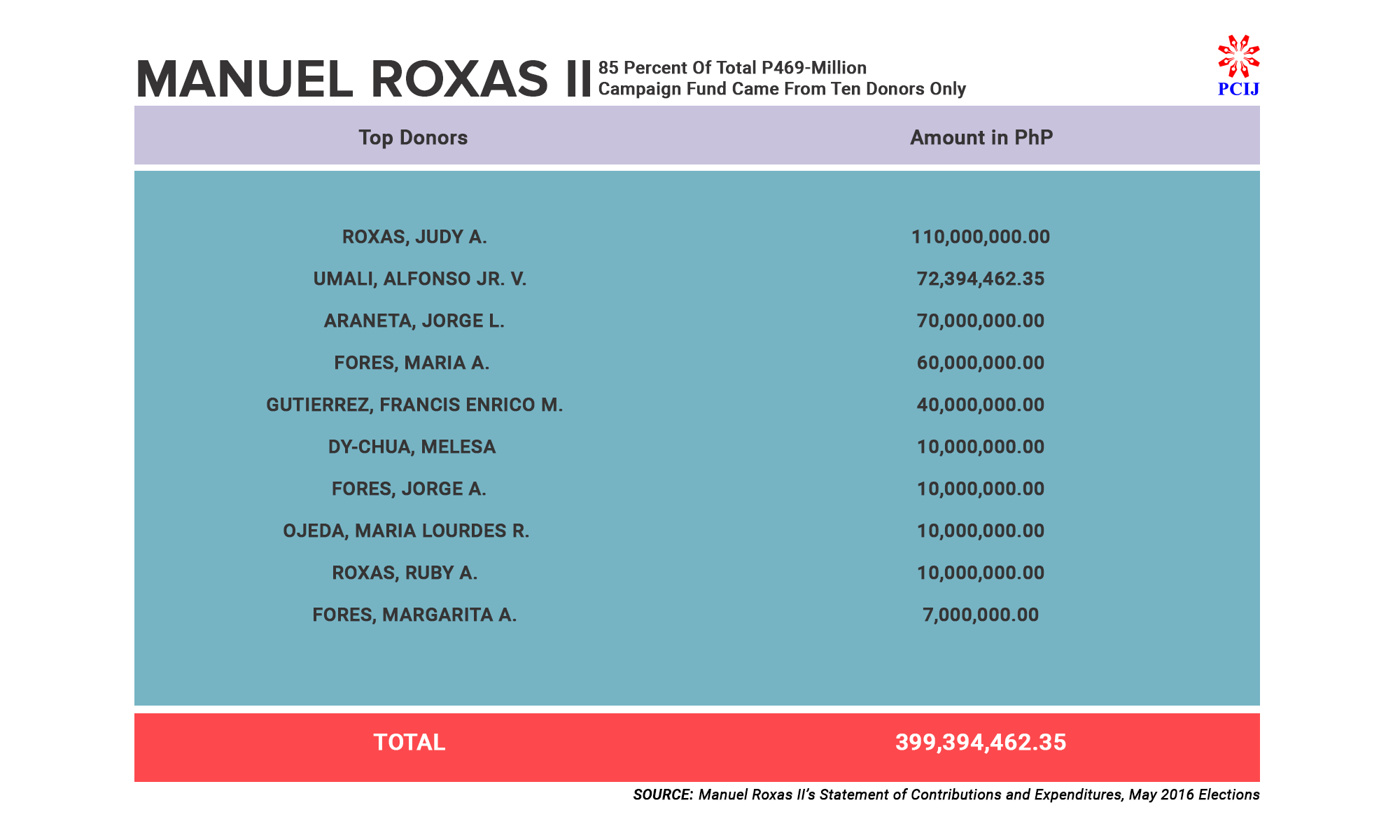 Manuel ‘Mar’ A. Roxas II, whose campaign funds came second to Poe’s in terms of total amount, even had almost all or 99 percent of his campaign donations coming from National Capital Region residents. Only P4 million came from Central Luzon and Central Visayas.

Roxas got P469.3 million and used P18 million of his own money to cover his P487.3 million expense. His mother Judy A. Roxas gave him P110 million while uncle Jorge Araneta gave him P70 million. Contributions from Roxas’s top 10 donors made up 85 percent of his entire campaign funds. Interestingly, the minimum donation to the Roxas campaign was P100,000.

Araneta-Roxas money also flowed into Roxas’s party. Roxas himself contributed P60 million to the Liberal Party, while Judy Roxas gave P40 million, and Jorge Araneta P50 million. Members of the Araneta-Roxas clan were among the Liberal Party’s biggest donors or those who gave at least P5 million. Almost 90 percent of the total money the party collected came from these big donors as well.

About 68 percent or P164.6 million of the party’s P241-million campaign fund total came from donors in Metro Manila. 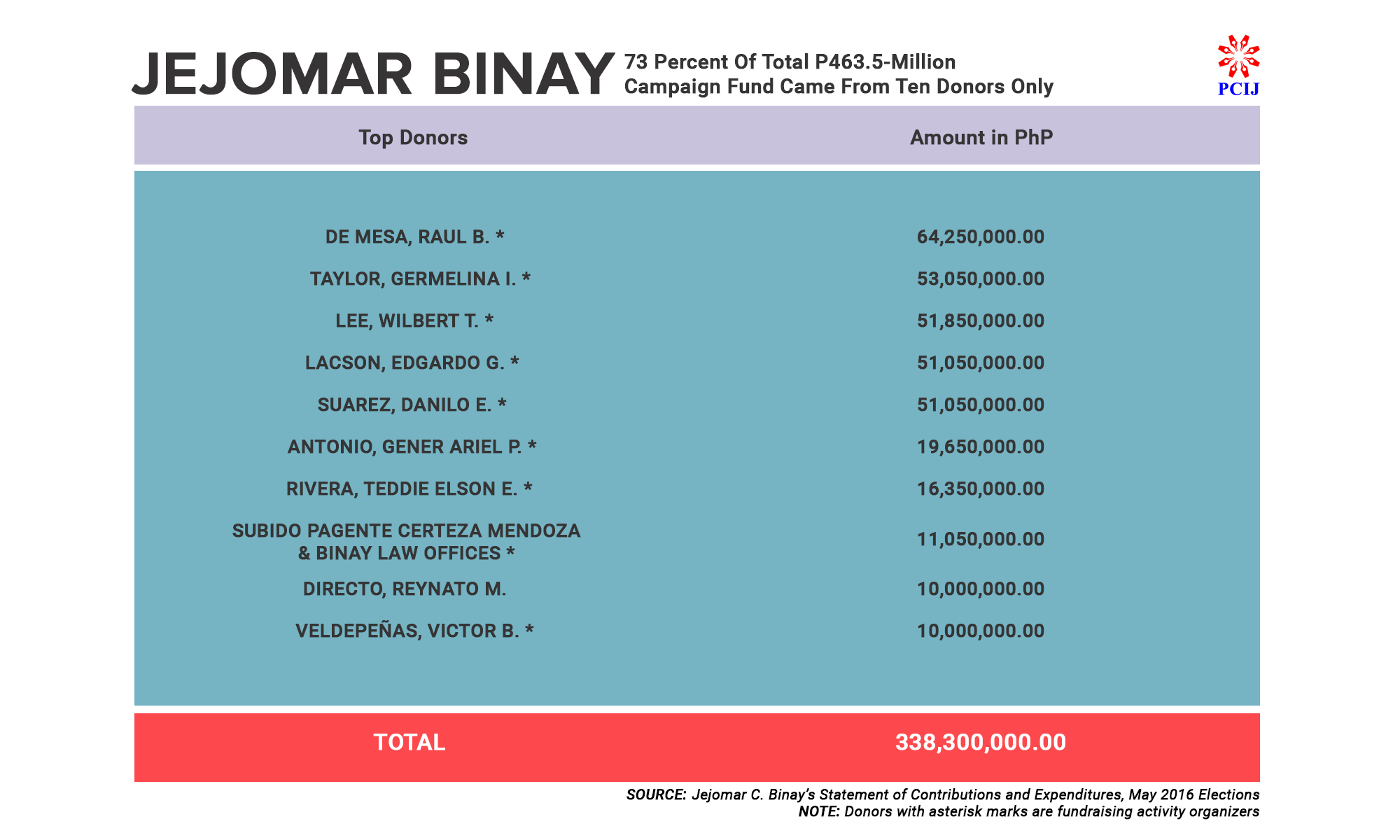 Then Vice President Jejomar Binay ran the third most expensive presidential campaign at P463.4 million. He collected nearly the same amount, of which 73 percent or P338.3 million came from just 10 donors. This is even though Binay had the largest number of contributors:280. The number could even be higher if he had listed all his actual donors, and not the names of his fundraising-activity organizers. 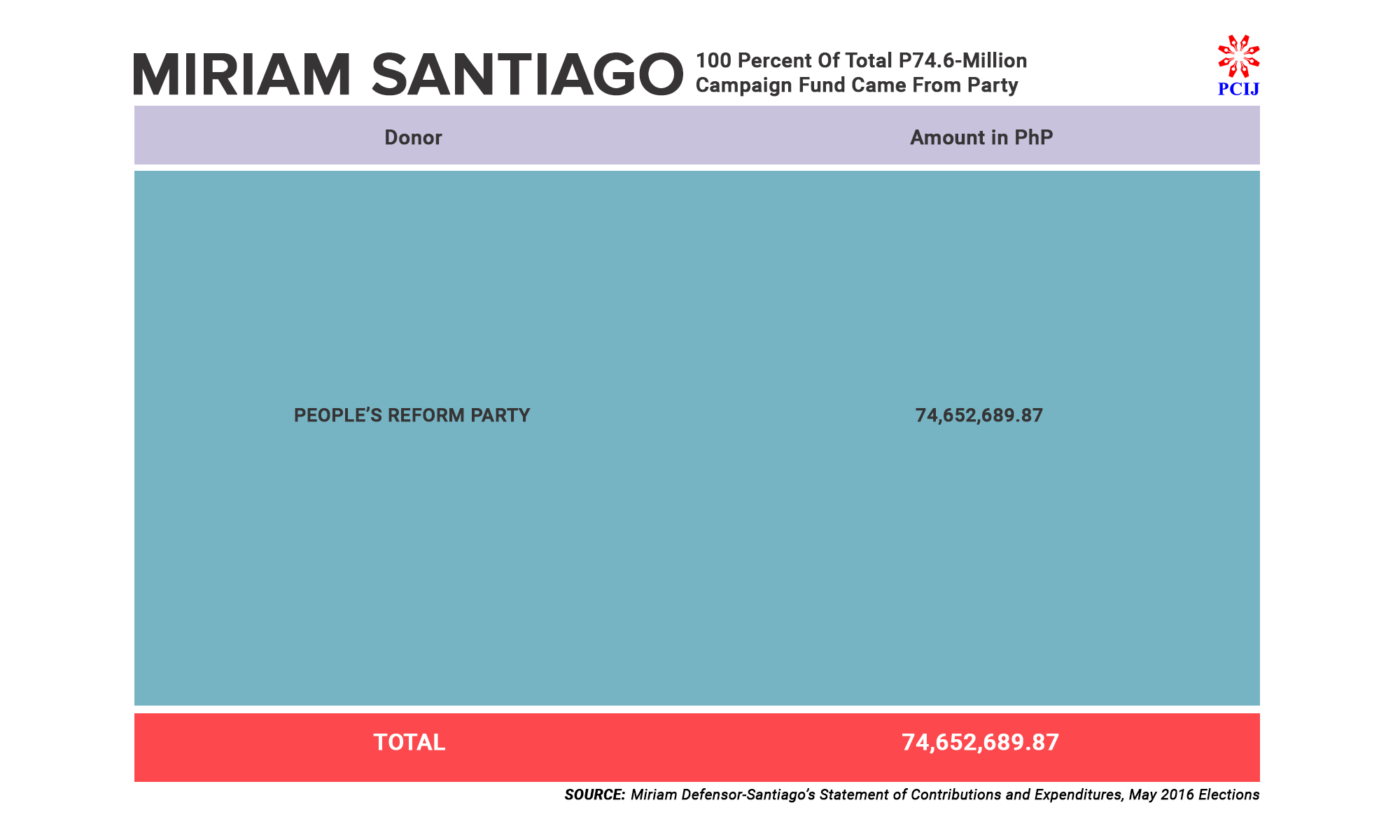 The late Miriam Defensor-Santiago, meanwhile, had the People’s Reform Party spend for all of her expenses. She received a bulk of P74 million from the party, which got the money from just 10 individuals. Eight of these were from Metro Manila.

Comelec computes the expenditure limit by multiplying a rate fixed by law by the number of registered voters. For presidential candidates, the fixed rate is P10 per voter; for parties, P5 per voter.

In theory, a single donor could contribute as much as these amounts. It’s not really that far-fetched from happening. In the 2010 elections, presidential candidate and real-estate magnate Manuel B. Villar Jr. did not receive any donation but instead spent P431 million of his own money to bankroll his campaign.

THE IMAGE Rodrigo R. Duterte projected of his 2016 presidential campaign was that it was one run on a shoestring budget. It supposedly had no donors with vested interests, and that included big businessmen and mining firms.

Thou shall not donate

BY ALL indications, the May 2016 elections are no different from previous polls in which those donating to the campaign coffers of candidates and political parties turn out to be the same business owners and executives yet again. In past elections, the names of the prohibited corporations themselves were listed in the Statement of Contributions and Expenditures (SOCE) that the partisans have filed with the Commission on Elections (Comelec).

Did you donate to a candidate?
Did your candidate report it?

ALL THE CANDIDATES and political parties in the May 2016 elections received sundry donations from an amorphous mass of donors. All, too, are required to report these to the Commission on Elections’s Campaign Finance Office (CFO).