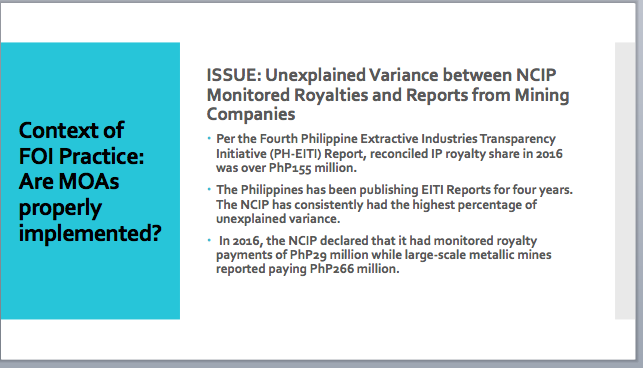 Bantay Kita (BK) is a national coalition with 84 members, and 70 network affiliates. Established in 2009 and formally registered in 2013, the Coalition advocates for transparency and accountability in the extractives industry to ensure that gains derived are maximized, shared fairly, and contribute to sustainable development. BK’s strategy includes research, capacity building, advocacy, and engagement with multi-stakeholder groups. Bantay Kita led the campaign for the adoption of Extractive Industries Transparency Initiative (EITI) in the Philippines. To date, BK remains a member of the PH-EITI Mutistakeholder Group (MSG). EITI is touted as the FOI counterpart for mining, oil, and gas sectors. EITI requires extractive companies to report on payments made to the government and Indigenous Peoples, while demanding the government to report its revenues for the same. The amounts reported are reconciled and validated by an independent administrator. The PH-EITI also demands a report on employment, as well as social and environmental expenditures made by the companies. BK is a Publish What You Pay affiliate.

II. Context for the Information Request

The National Commission on Indigenous Peoples (NCIP) Administrative Order No. (AO) 03, series of 2012, entitled “The Revised Guidelines on Free and Prior Informed Consent (FPIC) and Related Processes of 2012,” provides guidelines on the process of acquiring, implementing, and monitoring a Memorandum of Agreement (MOA) between extractive companies and Indigenous Peoples (IPs) Ancestral Domain owners. The MOA serves as a contract between the IP and the company, with the NCIP as the third party. It states mutual consent and identifies direct and indirect benefits as a result of negotiations. This includes, but is not limited to, royalty payments; detailed use of funds by IPs in accordance with their development framework; and inclusive dates and duration of the MOA.

According to the Implementing Rules and Regulations of the Philippine Mining Act of 1995, IP owners of Ancestral Domains are mandated to receive at least one percent of the gross output of a mine as royalty payment. The royalty is intended to form part of a trust fund for the socioeconomic wellbeing of community.

According to NCIP AO 3 s. 2012, royalties should have allocations for livelihood and social development projects; these must be allocated with not less than 30 percent of each and every release, among others.

The said AO prescribes that royalties cannot be released without the concurrence of the NCIP, secured by the IP Organization. The concurrence is intended to be a check on the use of the funds based on the Community Royalty Development Plan (CRDP). The CRDP is a development plan for the management and use of royalties. It considers the Ancestral Domain Sustainable Development and Protection Plan (ADSDPP)1.

Per the Fourth Philippine Extractive Industries Transparency Initiative (PH-EITI) Report, reconciled IP royalty share in 2016 was over PhP155 million. The Philippines has been publishing EITI Reports for four years. The NCIP has consistently had the highest percentage of unexplained variance. In 2016, the NCIP declared that it had monitored royalty payments of PhP29 million while large-scale metallic mines reported paying PhP266 million .

According to the United Nations Development Programme, the Philippines is home to some 110 ethnolinguistic groups mainly concentrated in Mindanao (61 percent) and Luzon (33 percent). IPs make up about 14 to 17 percent of the country’s total population. Data from the National Statistical Coordination Board show that in Mindanao, poverty incidence during the first semester of 2015 was at 33.8 percent in areas where most IPs were located. This is despite Mindanao’s vast natural resources. In the same year, 11of the 20 poorest provinces were also in Mindanao.

Bantay Kita works with IP communities to build capacities around extractives. One initiative is to guide IP organizations in crafting their CRDP as provided by NCIP AO 3 s. 2012. The CRDP serves as a tool for IPs to ensure socio-economic and cultural sustainability in their respective communities even after mines cease to operate. This requires access and understanding of data and documents so that they can make evidence-based decisions concerning mineral management proceeds.

The NCIP acts as the third party in the MOA between the IP and the company. The Commission monitors MOA implementation and may direct financial and management audits of IP organizations (IPOs) managing royalties and other benefits, or exercise its visitorial powers as provided for by law per NCIP AO 3 s. 2012.

It is assumed that the third party is the record keeper.In order to exercise its monitoring and visitorial powers, it must have a basis for monitoring. The MOA serves as a basis to monitor.

BK requested for copies of MOAs between IPOs and the 13 large-scale metallic mines that participated in the Fourth PH-EITI Report for 2016. We want to validate with IPs if MOAs were implemented, particularly regarding royalty payments. Access to the said documents would serve as reference to facilitate the crafting of CRDPs of the IPOs that BK is currently engaged with. 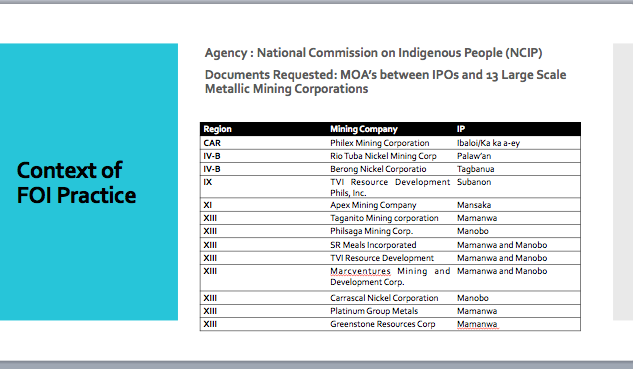 On April 18, 2018, Bantay Kita through the e-FOI portal requested for copies of the Memoranda of Agreement between all large-scale metallic mining companies and IPOs for better understanding and enhanced monitoring.

On April 27, 2018, Luzviminda Donato, FOI Officer accepted the request with Tracking Number #NCIP-177392456461. She communicated that NCIP would respond on or before May 9, 2018 per Executive Order 2 s. 2016. Since BK did not receive at the appointed date, it followed up through the e-FOIportal on May 14, 2018 and on June 28, 2018. No response was received. The exchanges may beaccessed through: https://efoi-ph.appspot.com/requests/aglzfmVmb2ktcGhyHgsSB0NvbnRlbnQiEU5DSVAtMTc3MzkyNDU2NDYxDA
After months of no response, BK followed up with the NCIP through a letter addressed to the Chairperson, dated August 23, 2018, and a series of phone calls, thereafter. Based on a phone conversation with the NCIP Ancestral Domains Office (ADO), the requested documents are available with PH-EITI and BK could get copies from them.

On October 15, 2018, BK requested the documents from the PH-EITI. However, PH-EITI said that it would not be able to provide the copies of the documents without the consent of each tribal leader involved the MOAs.

Given the situation, BK asked for a meeting with the NCIP Chairperson Leonor Oralde-Quintayo to be able to discuss the purpose and intent of the request. On November 6, 2018 the Chairperson released a Memorandum Order directing all regional directors to act on the request appropriately.

On November 29, 2018, Bantay Kita received the copy of MOA between Philex Mines Corporation and APPSOL from NCIP – CAR.

The delayed release of documents prompted Bantay Kita to recalibrate strategies in project implementation. In the absence of official documents, BK project implementers had to rely mainly on key informant data as bases for context analysis. At some point, some of the planned activities needed to be moved or cancelled.

In sum, the FOI practice started slow and was unsuccessful in obtaining documents within the prescribed period. Things turned for the better when BK deployed other means to get the documents it needed. BK notes the following observations:

• Follow-ups can be more efficient if we knew the particular person to ask the documents from. It seems that agencies do not have assigned point persons for FOI. Oftentimes, requesting parties are referred to different persons or departments with different contact numbers in every follow-up. This results to confusion and difficulty in tracking the requests.

• Role of network. It helps to know someone from the office where the document is being requested. Having a direct line to a particular staff within the agency can fast-track the request.

• Clarity on the rationale of the request for documents. Requests for documents will be most likely granted or acknowledged if the purpose of document utilization is made explicit.

• Agency buy-in. Having points of convergences in terms of advocacy and/or mandate between the agency and the requesting party may help ease the process of releasing documents.

• List of documents allowed for disclosure. It is observed that there is no inventory and disaggregation of documents that are publicly accessible and those that require consent. The officers in charge in the institutions where documents are requested do not seem oriented on the disclosure guidelines (if any), hence causing delays.

• Filing system. Retrieval of documents requested takes time due to the lack of or weak filing system within government agencies.

The constraints enumerated above should be addressed by:

• Ensuring Quality of Data. Certified photocopies of documents should be legible.

• Clearly identifying and/or designating the FOI receiving officers. The contact details should also be reflected in the agency’s website.

• Information Map. Each government agency should provide a list of documents for public consumption, and those with restricted access. The inventory of documents, together with the guidelines on documents needing consent, should be accessible in the agency website.